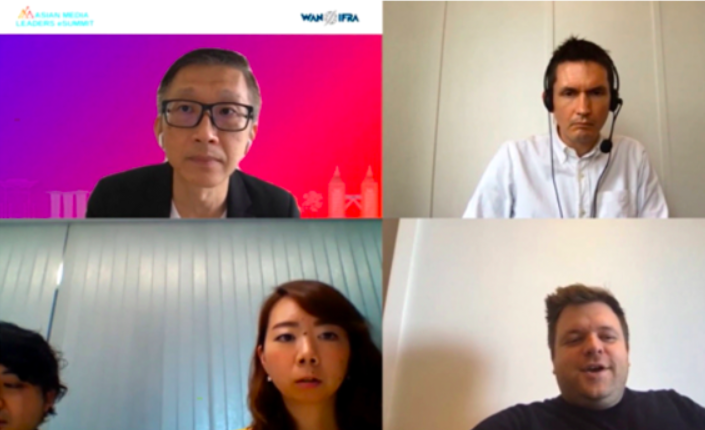 Consumer trust in media and brand advertising is critically important for global media companies as they move forward in a post COVID-19 world, according to a survey by WAN-IFRA and Syno International.

The Consumer Trust in Advertising 2020 Survey included a section on the impact of the coronavirus pandemic on consumer trust in media, Michael McDowell, Syno’s Managing Director in Asia, told the Asian Media Leaders eSummit.

Television news channels were the most trusted source of news in Asia, unchanged from last year, the survey found. Printed newspapers and local newspapers came second, while social media sites were considered much less trustworthy.

The 40,000 respondents from 40 of the world’s largest media markets were asked about trust in content, trust in advertising and the relationship between trust and purchase intent. They were also asked about the coronavirus.

In Asia, newspaper-based websites and apps were the most visited source for coronavirus news. Commercial TV channels were second, followed by printed newspapers.

The survey highlighted three country case studies: Indonesia with its huge digital native population, Hong Kong, which has undergone much change in the last year, and Japan with its traditional reliance on printed newspapers.

In Indonesia, overall trust in news remained quite high compared to 2019, with TV news channels posting the highest net trust score, followed by printed newspapers. Social media posted the lowest trust score. For coronavirus news, newspaper-based websites and apps were the most popular, followed by local, regional newspapers or their online versions, the survey said.

Hong Kong saw a drastic change, with lower trust scores for TV news channels and newspapers compared to a year ago, while trust in online media rose.

For coronavirus news, newspaper-based websites and apps were the most trusted, followed by commercial TV channels, although trust levels for both were down from a year ago.

Trust in Japan’s media is generally much lower than in other Asian countries. Printed newspapers had the highest trust scores, followed by TV news channels. Social and online media had a net negative trust score, indicating consumers found them untrustworthy.

In Asia, advertising on TV news channels were most trusted, followed by advertising in printed newspapers. This was seen in Indonesia, where social media advertising received low trust scores.

Hong Kong’s advertising trust levels diverged from its Asian neighbours over the past year. While the highest trust scores went to TV news channels, trust levels fell for other traditional media but increased for online media.

In Japan, nearly all types of advertising on media were negative, with ads on TV news receiving a score of zero, the survey found. Printed newspapers were the exception.

How does trust in advertising drive purchase intent?

China indicated the strongest correlation between trust and purchasing intent, while Japan showed the least, according to survey, which generally showed similar trends compared to last year.

The 7 Key Trends of Digital Advertising

Trust – It has never been more important. Trust pertains to privacy and privacy will most affect advertising and ad technology in the next 12 months. Users will be able to define who they trust or not, and publishers need to build that relationship so usage habits can be tracked and the data monetized. This can be done through events, personalisation and community action.

Independence – Homogenization of content will lead to commoditization, Hocking said. If your offering is the same as others and ubiquitous to the market, it will lead to the commoditization of your media and degrade your inventory. This can be seen in programmatic advertising – when a buyer can buy ads on any site and reach the audience they want to with the same data across every single site.

“The strategic move we should consider this year is ‘How do I form more unique relationships. How do I create more unique ad product?’ Something that does not play to scale and mass, but plays to specific value and a value exchange,” – Ian Hocking, SCMP

Some publishers like Autotrader in the United Kingdom have moved away from a standard ad format and removed IAB standards, preferring to leverage native ad formats bought directly.

Partnerships – Programmatic advertising is the predominant revenue stream for most media, but it’s still typical for publishers to generate most of their revenue from just 50-100 brands. Partnerships can go much deeper and speak to specific buyers, an advantage over homogeneous packages, deals and platforms that aim to appeal to every buyer and every user case.

“We as a community of publishers should be discussing how we can create a single sign-off that works for all us that is independent and not leveraged on platforms or other tech companies that may be looking to take a margin or may not have our interest at heart,” – Ian Hocking, SCMP

Revenue diversification – Podcasts, branded content and events are popular ideas for diversifying revenue at media firms, but they need to dig deeper into what they are as a brand, Hocking said. Internal talent can be valuable and found in brand studios, newsrooms and data centres. Also, previous reporting and stories can be turned into books, movies and TV shows.

Distributed – COVID-19 has changed the way that people work together.  A distributed workforce means finding talent outside your local area and creating teams of individuals around the world, with the flexibility to do more.

“Despite the challenges that we have clearly in our society and in our environment as publishers, there is plenty of opportunity. The more we believe in ourselves and our products, the more value we are able give out,” – Ian Hocking, SCMP

It will stop third party data used for DMPs (data management platforms) to deliver audience targeting, she said. As a result, DPSs (demand side platforms) will be unable to measure user conversion after campaigns.

Secondly, regulatory bodies like the GDPR and CCPA and are tightening privacy protection laws. As a result, companies are putting in place stricter controls on the use of cookies.

How can companies respond to these two challenges?

With third party cookies no longer available, publishers will need to increase their capacity to manage their own first party data to make it available for marketing purposes.

Secondly, with the accelerated privacy protection movement, it is important to get customers consent to use their data at the time of acquisition, she said.

In order to meet these two necessary tasks, there a focus now on zero party data initiatives, she added.

What is zero-party data?

This concept proposed by research firm Forrester in 2018 refers to data that individuals voluntarily share with brands. Zero-party data is based on the premise that a user has given their consent for use of their data.

There are two major ways to build zero-party data. The first is to create surveys on your website. By linking the survey data with access data obtained by a DMP, zero-party data can be obtained. The second is to get the user consent to build data for marketing purposes.

How can we use zero party data in marketing?

First, it can be used to improve the customer experience by using the data to improve product and services. It can also be used in CRM initiatives, or in advertising campaigns. Digging deeper into the personas of the loyal customers can help with advertising planning.

Consulting firms like Syno International can help media groups build and leverage their zero-party data to not only link with external parties but to serve the needs of their advertisers.

SCMP’s Hocking said the current state of advertising was extremely tough for publishers and they should support each other through these hard times.

Syno’s McDowell said COVID-19 has accelerated change in many industries. It’s important to build a more trustworthy platform with readers so that they are more digitally engaged with publishers.

Kensuke Maruta, a CCI Data Consultant, said a growing view in Japan is that programmatic advertising is not enough and firms will need to get more creative as they seek new sources of revenue.

Programmatic advertising is incredibly sensitive to external conditions, Hocking said. When the market felt a downturn coming, buyers started bidding at a lower price. During this pandemic, the number of advertisers declined, while others had their budgets cut.

Direct buys are less sensitive, he said. Brand safety is also a huge concern for advertisers, so the industry has to provide content solutions that are high quality and safe.

“You should concentrate your efforts and products and services on those direct programmatic, guaranteed, PMP or direct relationships and create the best packages you can for those things to try to maximise that potential,” – Ian Hocking, SCMP

Publishers should remove high-quality ad products that are most in demand from the open market place, and offer them only in guaranteed deals, PMP and to direct clients at an appropriate price, he said.

First party data and how publishers can embrace the future

“If we are collecting and building this trust level with your readers, ask readers permission to collect their data, ask readers what their preferences are in terms of the car they buy,” he said.

Publishers should view their readers as partners in this journey together and can charge advertising partners more for “real” user data.

Will publishers still use content and data analytics firms?

Even if third party cookies are not available, Maruta said publishers will still need the services of content and data analysis firms to sell to advertising partners. Also, publishers should consider building up their first party content as a good investment.

Are publisher alliances the way forward?

Publisher alliances are the way forward, Hocking said, but their value has to be established and, in some cases, publishers do not have the necessary elements for an alliance. It requires a complex backend for data processing and a single sign-on, ideally across different countries.

Advertising in the next 12-18 months

McDowell said he expected publishers in the next 12-18 months to look for ways to leverage their businesses against Facebook and Google. Many publishers will seek to distinguish their offerings through zero party and first-party data.

Maruta said people will spend more on Google and Facebook, pushing publishers to build up their first party and zero-party data.

Hocking concluded the panel discussion with a prediction that publishers will have to diversify their revenue streams much faster than planned.

“Reader revenue will become important to everybody. Looking at revenue diversification will become essential for all businesses. Unfortunately, I see a lot of disruption and change in the marketplace, which is going to make it a very challenging year,” – Ian Hocking, SCMP

About the author: Lee Kah Whye is Director at Project Mercury, a media business consultancy. Prior to this, he spent nearly 20 years at Reuters and was head of the news agency business for Asia.