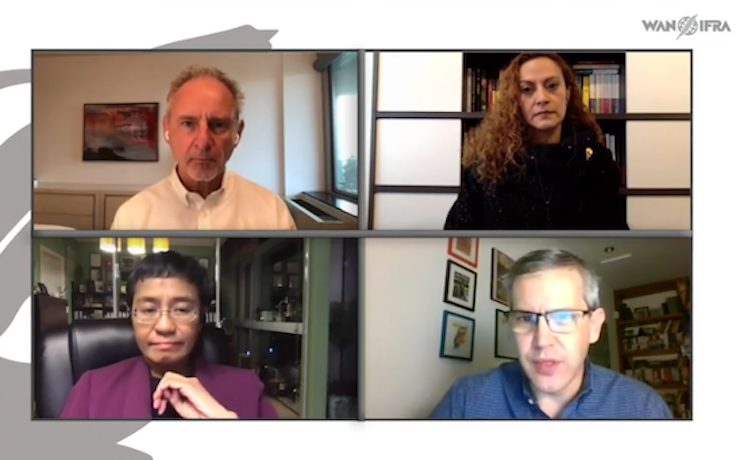 “Globally, we are at an existential moment because journalists have lost their gatekeeping powers, that has gone to tech,” said Maria Ressa, who, as an outspoken critic of Philippine president Rodrigo Duterte, has been a target of online abuse for years, and is currently facing eight criminal cases, which could result in a collective maximum sentence of almost 100 years.

“Unfortunately, the social media platforms, which distribute the news, are biased against journalists. They’re biased against facts. In fact, lies laced with anger and hate spread faster and further on social media. That’s by design so this is a problem. You can’t have democracy if you don’t have facts and will continue shining the light.”

At the same time, financial viability is a requirement for press freedom to thrive. As Facebook and Google capture the lion’s share of digital ad spending, news organisations are increasingly turning to their readers in search of a solution, launching digital subscription or membership models.

“We are facing a major challenge with regards to the economic situation because we have to carry out the transition to the digital model, which means we have to restructure our newsrooms completely,” Bedoya Lima said.

“I think the paywall is presenting historic challenges that we have to cope with. To do quality journalism you also need to have resources at your disposal.”

While Montgomery agreed with the notion of finding alternative revenue streams, he also argued that the digital advertising market still holds promise for news organisations.

“Most newspaper readers are prepared to pay for between one and two subscriptions a year and if you do the math that’s not going to save news organisations or journalism,” he said.

“Yes, Google, Facebook, Snap, Twitter and TikTok are taking a lot from the advertising pool but there are still billions and billions of dollars that are available to news organisations. We’re trying to help advertisers understand that an impression in news is worth more than an impression elsewhere and therefore they should transfer some of that revenue back into news. It’s a tough sell but it’s one I think we can do.”

This, however, has proven difficult at the beginning of the pandemic when many brands shied away from publishing ads in news for fear of having them appear next to content audiences might perceive as negative, according to Montgomery.

“There are tools available that would allow brands to avoid content they don’t want to advertise adjacent to, and frankly, newspapers haven’t provided that,” he said.

“The big platforms, I guess because they have money, have advanced their tools and their technology beyond what news can do and that’s exacerbated the situation.”

In some cases and countries, however, the reliance on advertising may also pose a threat to press freedom and a news organisation’s editorial independence.

“What we can’t do is link this exercise of journalism only to the attention of advertisements because I think that would be harmful,” Bedoya Lima said.

“This is one of the additional enemies we have to do something about that goes against the freedom of the press because when you have to adapt your advertising, especially what is provided by the government, to the way you work as a journalist that means that you are then facing lots of risks.”