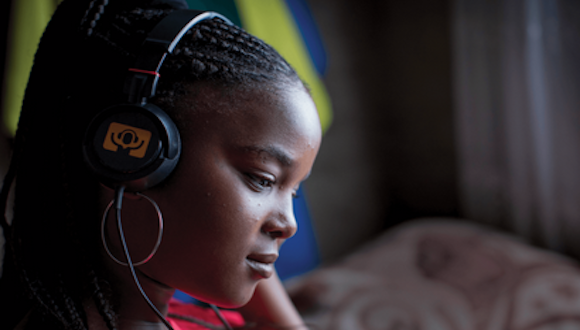 The organisation is running some 70 project sites in Tanzania, Zambia, the Democratic Republic of Congo, Ivory Coast and South Africa, works with more than 700 active youth reporters, and reaches nearly 10 million listeners each week, according to key stats on the website. The main focus areas of coverage include adolescent health, LGBTI+ rights, climate change, and education and opportunity.

Currently, CRF is starting a for-profit company called Radio Workshop and has tasked Shandukani Mulaudzi, Executive Producer of Podcasts, with setting up the first show of the podcast company.

“I’ve done everything from setting up working documents to communicating with people about their shows, to almost being the host of the show – the job changes all the time. It’s a start-up,” says Mulaudzi, who will be participating in a session dedicated to exploring the revenue, content and distribution aspects of podcasting during the virtual edition of Digital Media Africa 2020, taking place on September 8 and 9.

WAN-IFRA caught up with Mulaudzi ahead of the conference to hear more about the state and potential of the podcasting industry on the continent, which projects she is focusing on, and how her work has been affected by the pandemic.

WAN-IFRA: What are the main projects you are currently working on?

Shandukani Mulaudzi: We have a flagship show we’ve been working to develop over the last 12 months. We’ve done a lot and we have played around with things quite a bit. We’ve named and renamed the podcast three or four times. At the moment, we’re calling it This Is Africa but as we continue on our journey of pitching it to people with the real money – this might change. I think with Covid a lot of what we were trying to do was thrown off balance but we were able to stay afloat because most of us were working remotely anyway.

How has coronavirus impacted the work and operations at CRF, specifically the projects you focus on?

I guess the main thing is that we had big travel plans for the year to help us on our journey to figuring out what we’re doing. One of the main things I’d say we’re sad about is that we weren’t able to travel to Kenya in March for the first ever Africa Podcast festival. I know we will definitely be there next year but, wow, it was a blow to our systems to know that we wouldn’t be able to meet some of the people who we know are doing phenomenal work in the space of launching and spreading the podcast bug on the continent. Generally though, I’d say we were OK. We had to rejig and rethink quite extensively how we get the sound and good narrative we want even though we won’t be able to actually meet the people we want to interview and spend as much time with them as we would have liked to share their stories.

How have you adapted to the challenges caused by the pandemic?

We were able to add people to the team without worrying about where they are based. We’ve also just changed the way we find stories and the way we gather tape. We have to explain things to people we are interviewing more extensively and also just ask more of them. It can be difficult but we have made do.

How would you describe the state of the podcasting industry in South Africa and how do you expect it to evolve within the next few years?

I think in South Africa we are starting to find our feet. The fact is podcasting that is done well, costs quite a lot of money and many people don’t have that. Either, they’re working as one-man shows or they just don’t have enough resources within whatever companies they work for. But I think with enough time and training (which is part of what CRF aims to do over the next couple of months) we’ll definitely have more people who are also able to produce products that SOUND expensive but really aren’t.

I also think we have to be pretty honest with ourselves and recognise that without the help of radio, we’re not likely to get that far in terms of spreading the bug of podcasts. So radio stations will need to be willing to share airtime and we will also need to start working on content that isn’t just in English because we all know that the radio stations with the widest reach are not operating in English – at least not on this continent.