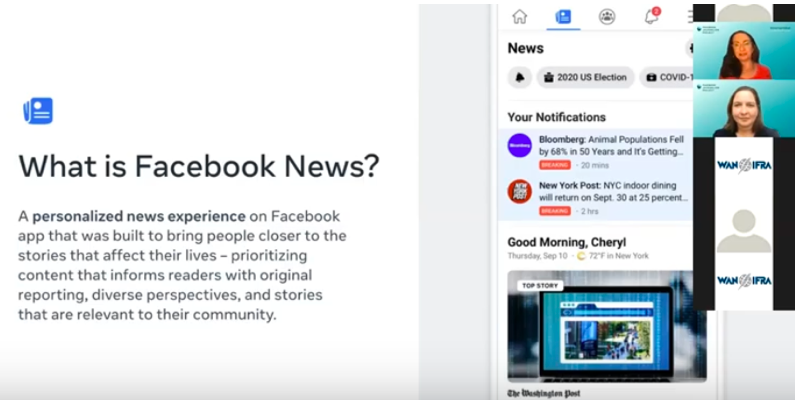 A year into its launch in the US market, Facebook News has gained a significant new audience that includes people who did not follow the Facebook pages of publishers or had not previously engaged with publisher links on the platform.

“We are extremely pleased with the number of people we’re seeing reaching new publishers they wouldn’t see because their friends and family hadn’t already shared it,” she said.

Kornblut, however, said there is still “more work to do” before Facebook News is available in the Asia-Pacific region. In August this year, Facebook announced plans to launch Facebook News in multiple countries within the next six months to a year and are considering the UK, Germany, France, India and Brazil.

“The thing about the news tab is that there is no one-size-fits-all. We can’t simply scale it to the rest of the world,” said Kornblut. She added that the expansion into future markets will be “very deliberate and thoughtful, and it’s not going to happen at record pace.”

Facebook will be assessing regional languages, local industry standards, and the landscape of the places it could go into, said Kornblut. She also said Facebook News could take a different form in new markets.

“Publishers abroad are going to be different from publishers in the US from what they want, and also readers and viewers have different expectations on what news norms are,” she said.

“In the case of Facebook News, it is quite important that we understand the publishing community in each market before we go there, as well as understanding whether there will be curation needs,” she said

In addition to having news selection using algorithms, Facebook News employs a team of journalists to identify the top news articles and videos for the tab. The curation team also creates collections, which are related stories that present multiple perspectives and experiences on big news events.

Research found that people want both personalised news and the important stories of the day, and algorithms have limitations in providing this experience, said Kornblut. Human judgement, she said, helps “make sure people really do see the most important news that is happening.”

To be selected, news items have to be widely covered across major news organisations, have impact on real people, be of real interest to people, and cover a diversity of topics, Kornblut said.

“What we are trying to do is demonstrate that there is a diversity of voices, that there are demonstrable facts in the stories, evidence of original reporting such as byline, that the sources are speaking on the record, and the other hallmarks of real, traditional, quality journalism so it is news that people can trust,” she said.

“We are hoping to make sure the publishers we are working with are transparent in how they do their work, that they are doing original news reporting instead of only just aggregating, and that it’s timely work, that it’s not archival material only, but it’s truly news, and that we’re giving people the most recent version of a story,” Kornblut said.

Kornblut also emphasised that Facebook News is not seeking to “take a cut of the revenue or charge publishers or divert traffic away.”

“We have different discussions with different publishers, and we completely understand the subscription and paywall business model and want to be supportive,” she said. Mentioning Facebook’s arrangements with The New York Times and the Washington Post, she said, “We’ve been able to work with them to arrive at a compromise so that they continue to pursue their audience strategy, and we continue to help them to reach new audiences who aren’t yet paying.”

About the author: Debbie Goh, Ph.D., is an assistant professor in the Department of Culture, Media & Performance at the California University of Pennsylvania. Before joining academe, she was a journalist with The Straits Times, Singapore.