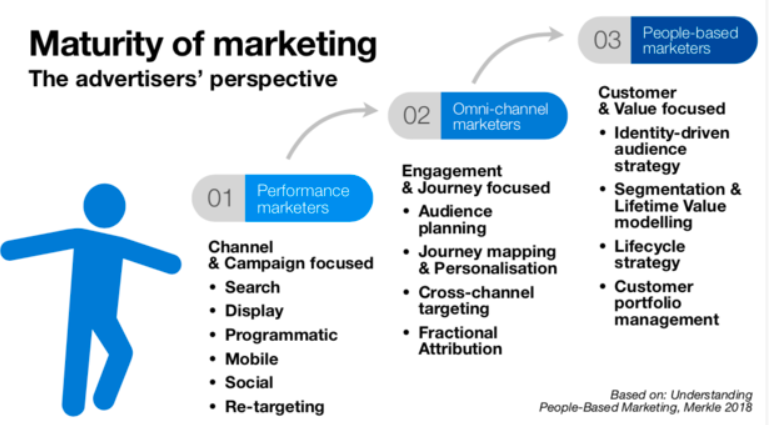 Above: Image from Grzegorz Piechota’s mini-lecture: “Data as the foundation of reader and ad revenues.”

From developing algorithms that personalise articles for readers to monetising audience data with advertisers, there are several ways publishers can leverage on data to drive subscriptions and boost advertising revenue.

1. There is no single “right” strategy

There is no “right way” to implement a data strategy. There are, in fact, a multitude of “variations in local detail” that have proved successful, said Brock.

His insight is supported by industry reports from WAN-IFRA (“The Building Blocks of A Reader Revenue Tech Stack”) and the Reuters Institute for the Study of Journalism (RISJ). Both reports highlight that data practices among publishers are highly customised to each publisher’s unique priorities and objectives.

Furthermore, the RISJ report urges publishers to develop their data capabilities by combining: (1) the right set of data tools, (2) a company structure that values data expertise, and (3) a company culture that incorporates data-informed decision-making.

2. From descriptive to predictive data

To boost reader and advertising revenues, publishers can for instance use predictive data to guide decisions on how to allocate resources to produce more articles that are in demand or monetise the predictive data with advertisers, he added.

To illustrate his point, Piechota gave an example of how publishers can use data to make predictions about future profitability in terms of customers’ lifetime value.

“For instance, if your data shows that each of your readers commonly spends $200 with your publication over a two-year period, then having a budget of $100 to acquire them over the same duration would mean your publication would still be profitable,” – Grzegorz Piechota

Furthermore, data-informed predictions can also possibly fuel data-based automation within publications, such developing content-recommendation algorithms, customer-service chat bots or “next best actions” recommended by AI based on a set of defined KPIs.

3. Data as a unifying goal

When encapsulated as a North Star metric and communicated clearly, data can be used by publishers as a unifying goal to galvanise employees to work towards common objectives, said Brock and Marshall.

Referring to the potential of data as a “single source of truth,” Marshall explained that Condé Nast International (the parent company of Vogue International) has during the past three years established a centralised data team that analyses various data threads and communicates the analysis to the publisher’s offices across 35 markets globally.

“Before it was centralised, there was conflict among various teams across the world about how to interpret the wealth of data,” said Marshall.

“Now, we have data analysts who are embedded in various teams across the world, but who report to the centralised data team at the head office which makes sense of the data before communicating it. This matrix system has proven that it’s a really good way to organise our data infrastructure,” – Sarah Marshall

Citing another example of The Seattle Times, Brock said the US-based publisher had initially started out by analysing too many sets of data that lacked focus on its core objective: growing reader revenue through subscriptions.

“The Seattle Times began with looking at pageviews, scroll depth, traffic source, bounce rate, etc. Over time, they realised it was too complicated and eventually focused on data related to each reader’s journey towards becoming a subscriber and how to influence that journey,” – George Brock

This audience-first approach in using data led to the creation of more cross-functional teams that were more effective at responding to the data and better communications among the teams, he added.

Despite the potential of data as a unifying goal, it is crucial that data teams in news publishers communicate how the data should be interpreted and utilised.

“Just giving raw data to people never works. To encourage conversations between audience development teams and the rest of the newsroom, the data must always be explained,” said Brock.

Using The Guardian as an example, Brock explained that the UK-based newspaper sends a daily email to all its staff that provides a summary of the publication’s digital content performance over the last 24 hours.

To help journalists and commercial managers make sense of the data and improve their work, a commentary that simplifies and explains what the data means is always included in that email.

Paraphrasing Mary Hamilton, the former executive editor (audience) of The Guardian, Brock emphasised that staff must be made aware of the possible actions that could be done with editorial analytics to improve the performance of a story, such as A/B testing a headline or adding a link or a graphic to accompany the text.

5. Occasions to ignore the data

Even though publishers should rely on data to inform their reader and advertising revenue strategies, there will be occasions when certain data should be ignored, said Brock.

Referring to The Huffington Post, Brock explained that the US-based digital publisher was an early and enthusiastic adopter of data to improve editorial performance and guide its social media strategies.

In 2011, The Huffington Post ran a 10-part series of stories about the treatment of wounded soldiers in Iraq and Afghanistan over the course of a month. The stories, unfortunately, had performed badly as compared to the other articles they had published in the same period.

“In data terms, it was a disaster. But the following April the reporter, David Wood, won The Huffington Post’s first-ever Pulitzer Prize for those stories,” – George Brock.

This suggests that there are moments when the data is not going to tell you everything, and that data should be used to augment journalistic instincts and not dictate editorial strategy, he added.

Newsroom and Business Transformation Asia (NBTA) 2020, organised by WAN-IFRA and supported by the Facebook Journalism Project, is the first training and coaching program of its kind in Asia that is designed to accelerate transformation in Asian news companies.

About the author: Sherwin Chua is a doctoral candidate at the University of Gothenburg, Sweden, whose research focuses on media innovation and journalism. He is also a freelance journalist who covers digital transformations occurring in journalism. He was a former editor and journalist in news media and publishing, and taught journalism and mass communication courses at a polytechnic in Singapore.