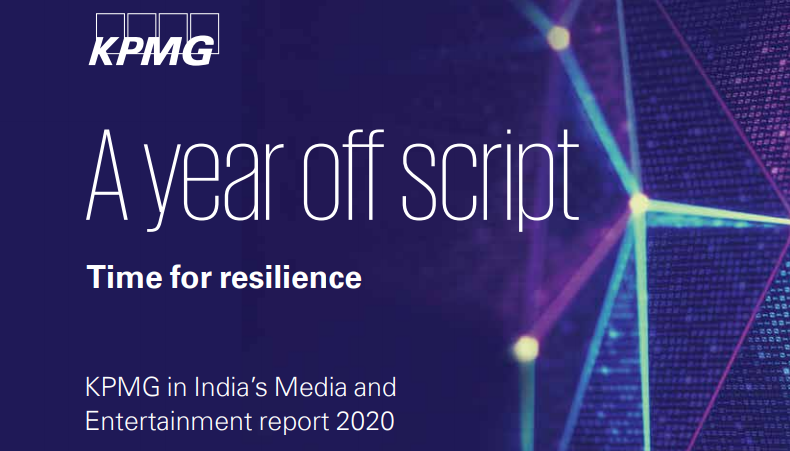 The M&E sector is expected to contract significantly in FY21 with major segments such as TV, film and print seeing major declines, due to a significant slowdown in advertising spend and content supply chains breaking down, according to a recent report published by KPMG titled “A year off script: Time for resilience.”

In FY20, the Indian M&E sector grew at a rate of 7 percent the report states. But due to the slowing economy coupled with COVID-19, advertising revenue growth was only 3 percent for the same period. The sector is expected to see a 20 percent decline in total revenues in FY21, with deep cuts in print and films, followed by television, on account of COVID-19 disruption, the report states.

However, the sector is expected to bounce back in FY22 with a growth of 33.1 percent over FY21, with gaming and digital being the fastest growing segments, the report notes.

The growth in overall revenues in FY20 was driven by digital and OTT video, which registered a growth of 26 percent during the period, the report notes. This was facilitated by robust growth in digital infrastructure and content supply.

Digital and OTT advertising saw 24 percent growth during the period, which also recorded strong growth in digital subscriptions, up 47 percent, thanks to growing user acceptance.

For print, the year has been difficult. According to the report, the segment recorded an 8 percent decline, primarily due to the slowdown in advertisement spend. This particularly affected English-language publications, which saw circulation declines due to stagnation in key metro markets. Hindi and regional segments saw a lower decline due to diversified local and national customers and greater reach in Tier II and smaller towns, the report states.

Nevertheless, there are some potential bright spots. With a strong festive quarter expected in the third quarter of FY21, the report observes that advertisement spends might recover.

“While advertising revenues on digital have been impacted from last year’s hypercharged growth, the subscription revenues have seen an upswing and could end up at an accelerated new normal once the pandemic subsides,” states the report, which also anticipates FY22 to be a bounce-back year for the sector, with a 33 percent growth projected over FY21.

News as an overall category has been growing in recent years, thanks to a rise in literacy levels, favourable demographics and deeper penetration beyond Tier 1 and Tier 2 cities. During the pandemic, the category saw demand like never before.

“A rapid expansion of mobile web access has paved the way for digital media growth in the recent years. The COVID-19 pandemic gave a further impetus to news consumption albeit with a paradigm shift in the news consumption pattern. Constraints around the distribution of physical newspapers during the lockdown led to an immediate sway of eyeballs towards TV and digital,” the report notes.

The full report is available here.