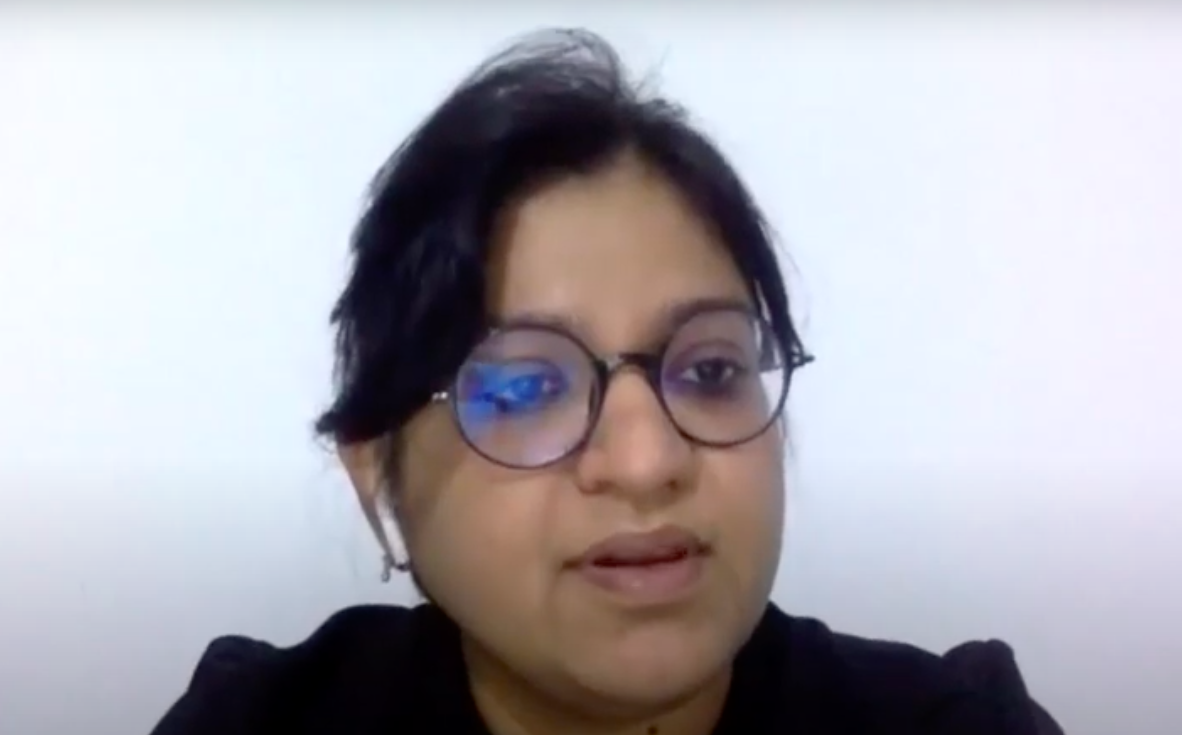 Peter Kabel, Professor of Interactive Media Design at the Hamburg University of Applied Sciences, set the tone for the tech talk by saying that ‘’the future is a welcome guest, and IoT and 5G are going to turn the world upside down.’’

According to Shikha Chaudhry (pictured above), co-founder of Elysium Labs and co-founder of Newsbytes India, ‘’AI is overhyped everywhere, and underhyped in the media. Contrary to popular expectation, AI is nowhere near taking over the world.’’

To demonstrate how the current state of today’s AI technology can benefit publishers now, she shared how her group was using artificial intelligence to transform news and content creation. The company currently operates three different services using AI:

Chaudhry said Yantra is designed to deliver quick, fact-based content. ‘’Yantra collates data points from the internet and connects the data points to create about 220 fact-based news stories daily in English and Hindi on a wide variety of topics.’’ That said, she emphasised that AI has to work in tandem with humans. “While it is good for factual articles, it lacks (the) empathy that (is) essential for human interest and opinion stories. So, Yantra only does factual stories.’’

Specifically with Newsbytes, Chaudhry stated that Yantra works by ‘’filling in the inefficiency gaps and creating more affordable content’’ compared to competitors, thereby helping to fulfill her dream of disrupting the global media industry through the production of affordable, high-quality content across more platforms throughout India.

As for Cricketpeida, Chaundry said AI and the sport of cricket go well together. This ‘’cricket version of Google’’ collects all available data on the game to answer questions, provide player and game statistics and deliver a treasure trove of trivia that could turn a cricket newbie into a veritable guru. She said, “It is like an encyclopaedia on cricket, which is a religion in India.’’

Diptendu Mitra, Director of the Global Strategy Group of KPMG, Singapore, saw 5G technology as a means for news organisations to transmit and curate news content and experiences faster and better.

‘’Under 5G, numerous devices can connect with one another with little or no latency (lagging), very fast communication and no delays,” he said. “Imagine being in a train going at 250 kmh and having no connectivity problems!’’

Mitra added that 5G technology would have an impact across a variety of fields. In medicine, for example, it could usher in better modes of diagnosis and treatment of, and even remote follow-up on, diseases and ailments. These are solutions that would benefit large and less densely populated countries such as Australia and many African nations.

‘’There will also be a rise in autonomous vehicles by then, and these could communicate with virtually any device, such as smartphones or drones,’’ he said.

Attractions could also take on new leases of life, thanks to 5G. Mitra considered a future where museums and other sites could boost flagging attendance figures through new experiences driven by Augmented Reality (AR) and/or Virtual Reality (VR), in addition to the usual exhibits.

‘’The museums could add these experiences without having to change the exhibits frequently,’’ he said.

As for journalism and news publishers, Mitra and Chaudhry both agreed that the type of news content would not significantly change under 5G, but its transmission and curation would need to be examined more closely.

Huge tech changes not right around the corner, but soon

However, the arrival of such a ‘’golden future’’ of new technologies, as Kabel put it, is still far off.

For one thing, Mitra mentioned that the capital investment and infrastructure required was enormous. That was why he said 5G rollouts were currently limited to the US, the UK, and several North Asian cities, where government and private funding were also available to drive the efforts.

Despite the hurdles ahead, Kabel, Chaudhry and Mitra were convinced that it would not be long before AI, 5G, and IoT to a smaller extent would play major roles in creating faster and more varied news content for a more connected world.

About the author: Arulnathan John is a freelance journalist. In his past life, he was a 20-year news and copywriting veteran of Singapore Press Holdings.