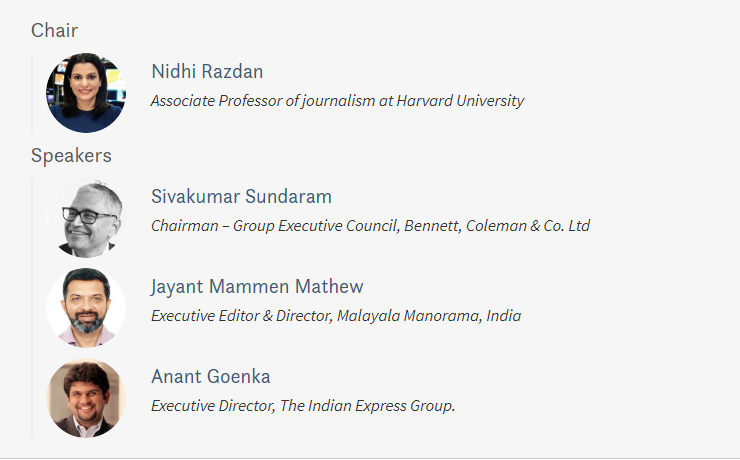 After months of upheaval, it’s clear that some structural changes are going to be permanent at news organisations in the post-COVID world according to the panelists who spoke about “Managing business and the future of news, post COVID-19,” during WAN-IFRA’s Indian Media Leaders eSummit recently.

“While the role of the media is huge during this crisis, the media has also taken a huge economical hit. Massive salary cuts, layoffs, shedding paywalls because people couldn’t read papers. What does the rest of the year look like? How can we get back on the feet?” asked Nidhi Razdan, associate professor of journalism at Harvard University and former Executive Editor at NDTV, who moderated the session.

Green shots after the crisis

“Several intermediaries in the physical value chain would disappear going forward. A countrywide largely distributed product in the physical space like a newspaper has had its challenges during the time of physical disruptions. Some of the changes would be permanent,” he said.

In India, when the lockdown was abruptly announced in March, everyone was caught by surprise. For media organisations this led to the breakdown of supply chains, a fall in the number of printed copies and readers shifting to digital mediums. However, there have been indications of green shoots.

At BCCL the focus of the team has been to get back distribution on its feet. Once the distribution reached healthy numbers the ad sales team took charge. Several experiments were conducted in August – offers were made, relevant contextual content was produced in association with the editorial team – and such works slowly revived the ad flow and created momentum among consumers.

“How we as an industry come together to define our business and how we continue to distribute the physical product going forward, is going to be one of the single largest determinants of our business model going forward,” Sundaram said.

Anant Goenka of Indian Express agreed that distribution has been picking up and media houses seem to be getting back to being “solid, independent financially relevant businesses.” However he felt that the next big phase of growth in the industry would come not from advertising, but from reader revenue, something he said that media houses have “historically been terrible at doing.”

“I think what’s always held us from going down this path is how little we know about our consumers. Whether in print or digital, we never invested in knowing them. Therefore monetising them has been really hard. As a 200-year old industry, it’s actually shocking how little we know about our end reader. And I think that’s where the excitement for our industry is,” he added.

In the case of Malayala Manorama, which didn’t face a distribution crisis, thanks to the well-established infrastructure and distribution networks in the state of Kerala, ad-revenue was the biggest challenge during the crisis.

“What this has really taught is that going forward we have several challenges. Tech companies have completely reinvented journalism. And it’s high time newspapers take note of that,” said Jayant Mathew of Malayala Manorama. Malayala Manorama was one of the first papers in India to put their e-papers behind a paywall two years ago.

“But that’s different from having a paywall for the whole website, something like the NYT or The Business Standard has done. That’s going to be our next challenge going forward,” Mathew said.

“For credible journalism, we need boots on the ground and someone has to pay for it. Gone are the days where advertising would pay for it. We have to get used to people paying for news online whether it’s per article or for the whole website. It’s going to take a few years for this to happen,” he added.

Mathew said another challenge was around the cost-cutting measures that he feared could lead to the creation of news deserts. If layoffs among journalists continue, there would be several areas where nobody would be covering news, he pointed out. “That’s bad for the industry, bad for credibility and bad for journalism,” he said.

The Indian consumer has been used to getting his or her newspaper for an extremely low price. Then there is the abundance of free news online, which has made it difficult for Indian publishers to determine if readers would pay for online news.

However, Goenka seemed optimistic. With behavioural shifts happening among users, thanks to services such as Netflix and Amazon Prime, he felt it was up to publishers to acquire those skills and the related mindset into their DNAs and to see what they could do best with it, he said. Adding to this is the fact that more people have been reading articles during the pandemic than ever before.

Nevertheless, it isn’t easy getting readers to pay, and therefore, paid digital news products need to show more value to consumers through richer content, podcasts, newsletters, videos, deeper analysis and so on.

“In online, the options are endless,” said Mathew, who also pointed out that people still valued print.

“There’s credibility. NYT still has a million print subscribers who pay US$1,000 a year for the printed paper. They pay only US$35 per month for the online product. So that value which a newspaper provides is what you have to give through your digital product also,” he said.

Earlier this year, The Hindu, one of the prominent English dailies in India, went completely behind a paywall, the first mainstream newspaper in India to do so. Since then discussions have been rife whether that would be the future of other news organisations in the country too.

Sundaram believes the future is about repurposing the content and segmenting the audience.

“Segmentation of the audience is the key,” he said. “In a country like India, the audience profile is huge. But digital enables you for that. As a large organisation, you need to create value packs for each segment of audience. Each medium has its own intrinsic appeal and based on that you will have to repurpose the content.”

“Business has become complex, and we need to redefine what is our business,” he added. “Digital is getting more and more consumers, and we are struggling to play the catchup game. The answer, therefore, is not to put everything behind a paywall.”

Goenka phrased it slightly differently and noted that the reporter’s job was no longer to write but to evolve to being read.

“Packaging for different platforms is so important, understanding your audience segment and packaging it differently for each segment even on the same platform is important,” he said.

According to Mathew, in this age where Twitter decides the next big news story, partnering with readers would be crucial going forward. It could be through webinars, roundtables, readers’ questions or any such channel that ensures a constant dialogue with consumers. However, there are also people who wreak havoc on social media, and that’s where journalists come in and make sure credibility is maintained.

“I think it’s important that we don’t reduce the number of journalists,” Mathew said. “Journalism is expensive. You need to really feed it to get good stories. We were sort of fortunate that we didn’t have to slash salaries primarily because our distributions were intact. We cut several other costs instead. It’s important that we find ways to ensure that journalism survives and good stories survive. Because without that there’s no product, there’s no newspaper.”