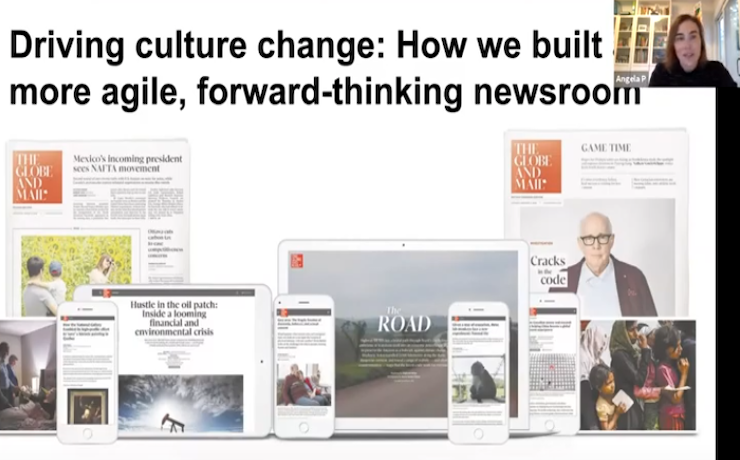 “Before you can figure out how to do culture change, you really have to dissect what it is you want to change,” said Angela Pacienza, Executive Editor, during WAN-IFRA’s virtual Newsroom Summit.

“So we really had to figure out what were the problems we were trying to solve at the Globe.”

These included, among others, reducing the duplication of efforts between print and digital teams, putting a stronger focus on subscription growth and helping staff understand it better, as well as improving communication and collaboration.

Moving to a new structure

“In our old organisational structure, print was in the middle and everything always revolved around it, no matter how many times we declared ourselves digital first. That was a real struggle for us, so we decided it was time to blow the whole thing up,” said Pacienza, who took on the role of Head of Newsroom Development to lead the culture change project at the time.

“We decided what we really needed to do was stop talking about digital-first and start talking about audience-first, that there were different audiences that came to us at different times of the day and that we had to be responsive to those groups accordingly.”

“What this allowed us to do was really be nimble and expand and contract according to different projects, different content types and whatnot, and it’s proving really valuable now with coronavirus as we’ve had to evolve and adapt all over again,” she said.

Pacienza said The Globe and Mail tackles one to three areas at time, and started out by bringing the concept of an audience-first organisation to the forefront of everybody’s minds.

“Every single memo we sent out, every single type of communication we did with staff, we centred it all around the audience and what that allowed us to do, so that it could really sink into people’s heads.”

The Globe and Mail also wanted to expand the newsroom’s understanding of data journalism, and implemented a rule mandating that every group working on a data project must include at least one person with no prior experience in this field.

“What that allowed us to do was expand and show people that data journalism was something that was super important to us and not just for this one particular little team,” Pacienza said.

To bring staff along, The Globe and Mail also ran a bunch of ‘tiny experiments’, spanning four to six weeks, in a variety of areas, from decision-making to running the homepage or selecting photos.

“They will allow an open mind for four to six weeks, and four to six weeks is enough time to change someone’s mind on an idea that they were very against in the beginning so that was really good for us as well,” she said.

Transparency also played an important role in driving culture change at The Globe and Mail. Employees take part in formalised mentoring and coaching, receive daily story plans with high performing stories via email, and have full access to metrics and data.

Each story is assigned a score (dubbed The Globe Score), which is made up of a range of reader and revenue-revenue focused metrics, such as engagement, subscriber acquisition and retention.

Built using its homegrown analytics tool Sophi, it allows The Globe and Mail to figure out what is driving subscriptions, where readers are finding content, where they are going next, and so on.

Leaving the grunt work to machines

Sophi is also in use to run as many of The Globe and Mail’s digital properties as possible, programming most of the homepage, making paywall decisions, and automating Facebook posts.

“We really wanted staff to focus on work we deemed important, so what we tried to do was take away the work that we didn’t deem important that we thought an algorithm could do for us better,” Pacienza said.

“With all of the changes we made, we didn’t have job losses, we just redistributed staff to areas we deemed more important.”

This entire process also helped prepare The Globe and Mail for the coronavirus pandemic, allowing the organisation to redistribute staff much more quickly than three or four years ago.

“People are so used to this change that we have done and they’re so used to feeling safe in the change, which is super important when you’re trying to do culture change.”