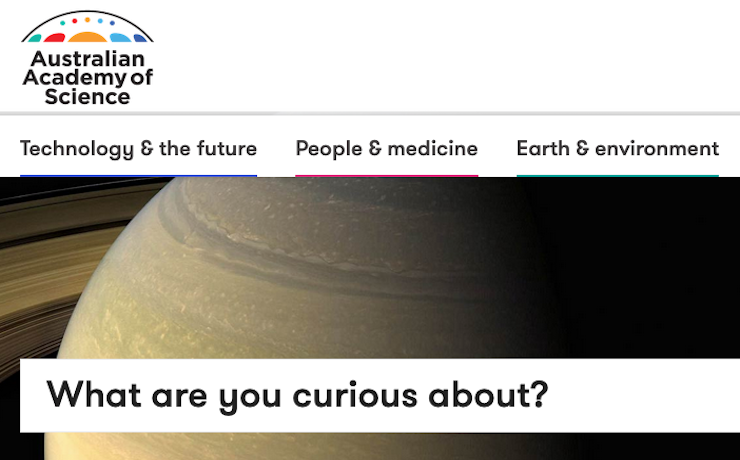 The content creation programme sees scientists and mainstream media professionals closely collaborate with the aim of making science more accessible to the public, including those with no experience or direct interest in the field. It has found traction with news organisations in Australia and beyond, which during COVID-19 have regularly republished articles and explainer videos.

“More than ever before, the public needs trustworthy accessible information to inform their decisions every single day, to help sift through all of the misinformation, and decipher between what’s real and what’s not,” said Anna-Maria Arabia, Chief Executive of the Australian Academy of Science, during WAN-IFRA’s Science in the Newsroom Global Summit in November.

“We set about targeting the really hard to reach audiences that are those people who aren’t interested in science naturally, who either think it’s too hard, too boring or haven’t gravitated to science over the course of their life.”

The Australian Academy of Science is an independent organisation representing Australia’s leading scientists, and its content production is characterised by close collaboration between science and media professionals, as well as a rigorous review process.

“The secret to the content that we make is really bringing excellence in science together with excellence in engagement,” said Paul Richards, Director of Communications and Outreach, who spent some 20 years working in mainstream media prior to joining the Academy.

“My team is made up of mainstream media professionals and science communicators, and we also draw on the Academy’s over 550 top scientists, our fellows, and work together to produce this content and make sure that it’s factually accurate.”

After the commissioning phase, science communicators within Richards’ team research the content before passing it on to media professionals for scripting and production.

“The final step, which really is probably the most crucial, is the review phase, and coming from mainstream media this was a completely sort of foreign concept to me,” Richards said.

“Of course you’d have a sub-editor or someone higher up the line who would check your work before it went out, but actually having independent experts checking that content and making sure that it’s definitely factual was quite an amazing process to go through, to learn how vital it is to ensure that the content is not only engaging but also accurate.”

In practice, this means that all pieces of content are reviewed by the scientists that appear in the video, as well as an independent expert in the field that is not related to the research.

Additionally, at least two fellows of the Academy Oversight Committee, which is made up of five people, have to sign off on and approve any content before it is published.

“It’s on the strength of this review process that our videos are regularly picked up by mainstream media,” Richards said.

When Richards helped set up the video team, the Academy had some 9,000 followers on its Facebook page, and fewer than 20,000 followers on Twitter. By now, its social media presence counts roughly 2.4 million followers.

To hear more from Arabia and Richards on how the Australian Academy of Science produces its content, and collaborates with scientists, both domestically and internationally, watch the recording of their presentation from the Science in the Newsroom Global Summit on YouTube. To see their COVID content, go to the Academy’s website.