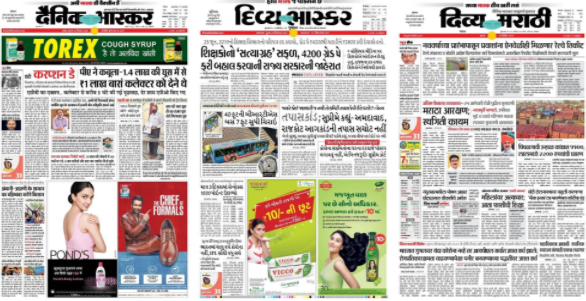 The concerted efforts of the global medical fraternity, experts and political leaders will yield vaccines that will be made available to people over the next 12 months. The Indian government, too, is weighing in on the efficacy, long term effects, cost and distribution of the vaccine in the world’s second largest populated country. In a country the size of India, the vaccine could take months to reach every person.

Dainik Bhaskar Group, India’s largest newspaper group with a readership of 6.6.crore readers (Source: IRS 2019, Q4, TR, Main + Variant), has been at the forefront of driving socio-economic changes in its markets of operation. The group enjoys an unrelenting credibility and reader trust and its editorial philosophy ‘Reader at the core’ is aimed at adding value in readers’ lives by delivering rich knowledgeable content. To this effect, driving impact through group publications, digital platforms and radio has been tried and tested successfully time and again. The group’s social campaigns have a great advocacy effect too.

The Dainik Bhaskar, Divya Marathi and Divya Bhaskar newspapers from the Dainik Bhaskar Group have stepped up their social messaging endeavours by replacing the masthead with ‘Mask is the only vaccine for now’. In keeping with its on-going campaign, this move is aimed at drawing attention to the fact that wearing masks is critical in the fight against the pandemic and keeping the economic activity moving as the world waits for the vaccine.

The group’s leadership position and widespread reach across 12 states in India through three flagship newspapers – Dainik Bhaskar (46 editions), Divya Bhaskar (9 editions) and Divya Marathi (6 editions) along with Radio and Digital platforms have been optimized towards creating awareness about the importance of masks. 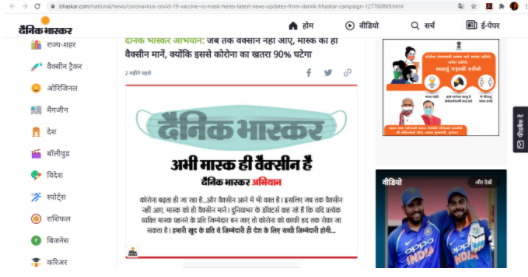 Such strong measures towards creating awareness about the importance of masks are yielding results as people are increasingly including masks in their daily routines and raising their voices against those who are seen without a mask in public.

“The Bhaskar Group has always taken its role as the fifth estate of the society very seriously. The revolutionary move of replacing the masthead with a mask is an industry first and is specifically designed to alert the reader on the seriousness of the issue. The on-ground efforts put in by the team along with relevant content has helped create awareness on the importance of constant vigilance, social distance and wearing masks,” said Sudhir Agarwal, MD, Dainik Bhaskar Group.

This post has been contributed by India’s Dainik Bhaskar.

The importance of the newsroom: Indian news companies in a post-pandemic world

How The Guardian’s reader revenue strategy is paying big dividends