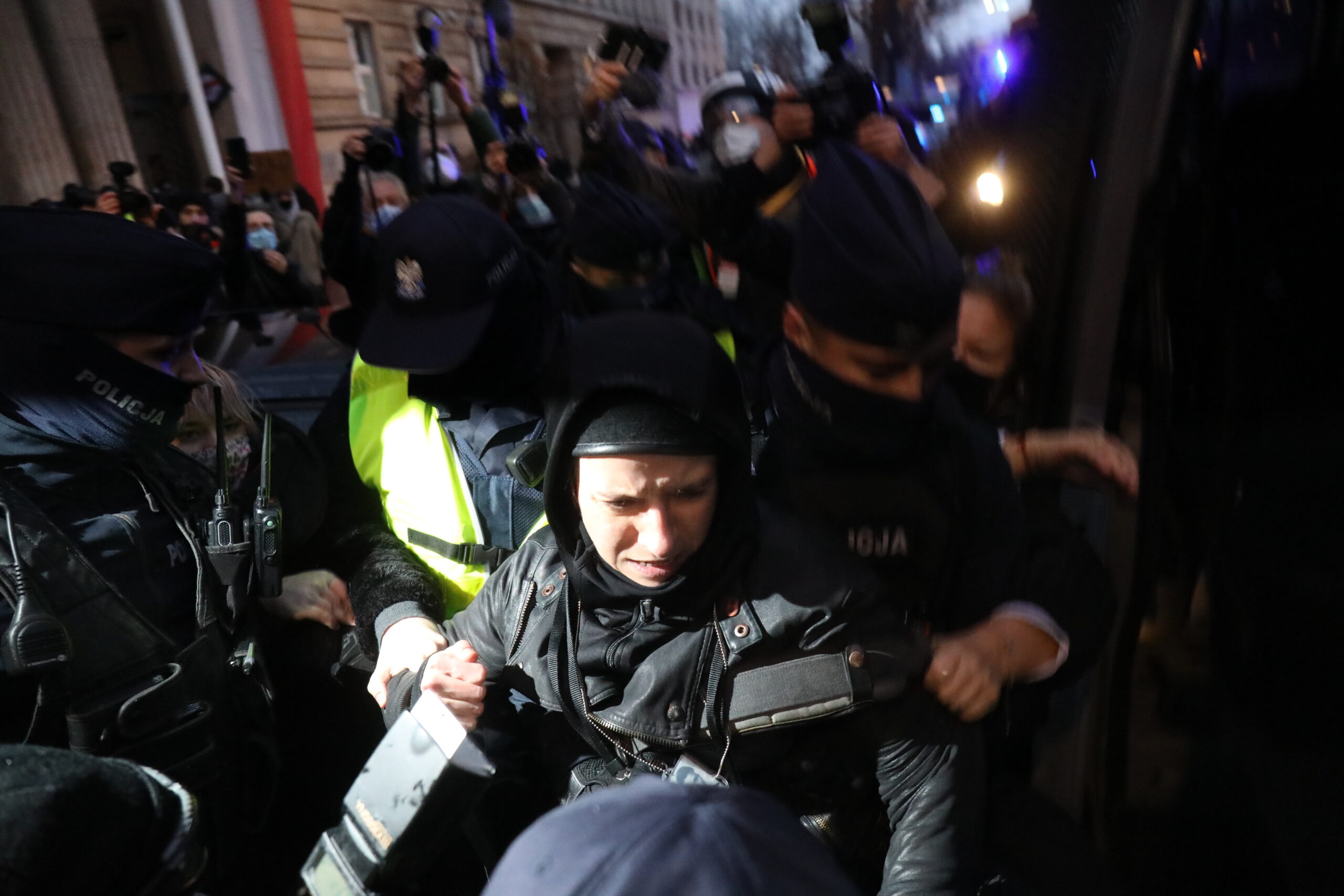 23/11/2020 Warsaw, Ministry of Education and Science. A protest by activists organised by the Women's Strike against the Minister of education and science, Przemysław Czarnek, and in connection with the tightening of the abortion law. Gazeta Wyborcza's photojournalist Agata Grzybowska during police arrest. Photo: Maciek Jazwiecki / Agencja Gazeta

This short, albeit influential history has defined the paper and its publisher Agora Group, as once again they find themselves in opposition to the ruling majority.

Since the election victory of the Law and Justice party (Prawo i Sprawiedliwość – PiS) in 2015, Gazeta Wyborcza “has been under constant assault,” claims former Editor-in-chief, Piotr Stasiński. (After coming out of retirement to help in the fight, Stasiński is currently deputy Chief editor). “The right-wing populist government remembers what a pain in the ass Wyborcza has been to those in power over the years,” and is embarking on a systematic attack “to reduce the paper’s influence and ability to speak out.”

Threats to editorial independence and intimidation of journalists have intensified, while legal challenges – designed to tie the organisation in perpetual litigation – and coordinated efforts to undermine business operations, threatening the survival of the company, have all increased. The COVID-19 pandemic brought no respite: instead it has provided the PiS and its anti-media agenda cover under which to quietly tighten its authoritarian grip.

Wyborcza is currently facing 57 (and counting) civil and penal libel and defamation cases, a few of them under infamous Article 212 of the Penal Code, a time-consuming and resource-sapping experience for the media organisation, its lawyers, journalists and editors. The vast majority of these cases have been filed by PiS-loyal public officials; most are unfounded, yet the process remains painstaking and is exacting a huge toll on resources.

Wyborcza chooses to fight every case, remaining confident in the accuracy of its investigative journalism and willingly publishing corrections where necessary. In other words, trusting in the process.

But it is a calculated risk. The PiS objective “isn’t necessarily to win every case, rather to completely preoccupy us with the fight for press freedom,” says Stasiński. “They’d like to see us buried under the avalanche of lawsuits.”

The result is both an attempt to criminalise journalism and to divert Wyborcza’s attention. So far, despite the obvious strain, both appear to be failing.

Legal worries are just one element of a deteriorating media freedom environment in Poland. Along with other media outlets that refuse to align with the government, Wyborcza reports a blanket withdrawal of public advertising. The PiS often uses its official advertising budgets – such as a recent public health campaign around COVID-19 – to reward favourable coverage and promote loyalty, a classic abuse of power and common soft-censorship tactic.

But this goes beyond government and public institutions; ruling party loyalists have taken over state-owned companies that have subsequently also withdrawn advertising from Wyborcza and its associated media outlets.

Even state energy company PKN Orlen is implicated, having removed completely – or at best, made it very difficult to locate – copies of Wyborcza in its gas station news kiosks, a not-so-subtle attempt to literally bury bad news.

For Wyborcza, this is evidence of the central government’s wider attempt to consolidate power by undermining and limiting the responsibilities of local administrators. State funding to provinces seen as ‘disloyal’ has been reduced or denied, while attempts are reportedly being made to centralise the distribution of money received from the European Union by government-appointed officials. Currently, the responsibility falls to local governments, separately elected and independent.

Perhaps most disturbing is the potential role the recently acquired local news network will play in determining the outcome of future elections. Prior to the purchase, Polska Press had been particularly strong in data mining and collecting information on its 17.5 million online userbase. Mirroring current global concerns on the potential (mis-)use of this type of data, Wyborcza is increasingly worried by the retaliatory nature of the central government and its attempts to subordinate local power structures.

“2020 marked the 30th anniversary of the creation of local government in Poland, and for many…, its establishment and development over the last three decades is considered to be the highest accomplishment of the political transformation which took place in Poland after 1989,” says Piotr Stasiński. “Now, the government is ruthlessly executing a campaign aimed at bleeding them dry in order to destroy citizens’ trust.”

There is a growing sense of foreboding as to what form these efforts will take as the government’s newly amplified voice across local media intensifies. Wyborcza is prioritising its local editions and is planning to increase support to local journalism initiatives via the Gazeta Wyborcza Foundation, in an attempt to offer a counterweight to the expected wave of polarised news, misinformation and the resulting instability.

While determined to keep a healthy democratic system alive, Wyborcza and the Gazeta Wyborcza Foundation also aim to make their journalism accessible to a wider audience as a means to sound the alarm on what is happening in Poland. Its English-language ‘News from Poland: Democracy at Stake’ newsletter began as an effort to inform expats living in Poland about the COVID-19 pandemic but has since broadened to focus on Polish political issues, including media freedom.

“It is difficult to overstate the scale of the assault on media freedom by the ruling camp in 2020,” Stasiński wrote in the closing edition of ‘Democracy at Stake’ for 2020. “Over the last year, we have witnessed increased activity aimed at intimidating news outlets and journalists critical of the government, further efforts to financially bolster the media loyal to the Law and Justice party at a time when most publishers face serious budgetary constraints due to the economic crisis caused by the pandemic, and a first large-scale state takeover of a private media conglomerate.”

Despite this list of ‘accomplishments’, commentators are bracing for more in 2021 as the ruling party pursues its agenda. A chilling effect is taking hold and Gazeta Wyborcza and its allies remain deeply concerned for the future of democracy in Poland. Unsurprisingly, they see solidarity as the only way to keep freedom alive.

A weekly English newsletter providing an overview of news from Poland covered by Gazeta Wyborcza. It is written by Wyborcza’s editors, journalists and collaborating experts. Coverage focuses on Polish political issues, especially concerning the ruling party’s assault on democratic values and the rule of law; on stories that show Polish society being at a crossroads between religious conservatism and progressive human rights; and on the ongoing COVID-19 pandemic.

The Gazeta Wyborcza Foundation supports the ‘News From Poland’ initiative and its ‘Democracy at stake’ weekly newsletter to ensure open access to high quality journalism for English speakers interested in Poland.

Read more about efforts to strengthen a free media and democracy in Poland, as well as support the Foundation with a donation here.