It hasn’t taken long for The Federal to get recognised for its compelling interactive content: In early December, the company took home the ‘Best Data Visualisation’ honour in WAN-IFRA’s South Asian Digital Media Awards (SDMA) 2020 competition with its Mars Mission 2020 interactive project.

The interactive received over 1,200 organically achieved unique views, with each user spending an average of 2.5 minutes on the page. The website hits 1 lakh views daily (with about 60K-70K uniques) and the interactive projects register 5,000 monthly visits from its mostly mobile, young audience.

The data visualisation department is a core part of the editorial team as it comprises eight people, of which two are data journalists, three are developers and three are illustrators and designers. With 29 staff total, that commitment to such a team says a lot about The Federal’s vision.

Data is now far more ubiquitous than ever before. The team now produces double the number of stories than it used to a year ago.

“It is now important to consider data visualisations as objects for critical scrutiny and not just as mechanisms to communicate data. One of the aspects of journalism that many journalists are now focusing on is data visualisation, which is an attempt to take complex datasets and turn them into fascinating visualisations to be used in ‘storytelling’ that would otherwise look boring,” said S. Srinivasan, Editor-in-Chief.

After working on a range of topics, the team managed to overcome this difficulty by understanding the importance of minimalism, concise writing, and sifting through the sea of content to choose what small screens adapt to best.


“We have learned to think in a mobile-first way and keep the UI and UX as clear and easy to understand and navigate as possible,” says Ravishankar. “We have a better understanding of what technically works with our infrastructure. We use our tools, libraries, and plugins accordingly, which saves us time while not compromising on the execution of the project.”

S. Srinivasan says that while creating compelling visuals for a given dataset is challenging for most people, there are now many online tools and softwares (SaaS) available that make it easy and faster for journalists to create visual content.

“This has been made possible due to the intersection between journalism, computation and emerging research on HCI (Human Computer Interaction). In our newsroom, we see that data visualisation is now bridging the gap between quants and wordsmiths, and locating outliers and identifying trends that are not just statistically significant, but relevant to understanding the inherently complex world of today.” he says.

What makes for good visual storytelling?

According to Ravishankar, every visualisation has a purpose. “If you are able to convey what you want to say without having to explain it, that makes a good visualisation,” he says.

“Cosmetics are subjective and not a factor for considering a good or bad visualisation.”

How does the team ensure its readers do not feel that they are not equipped enough to decode a particular story? V. Srinivasan admits to taking that risk at times, but mostly believes in sticking to simpler forms of data visualisation such as line, bar and pie charts to put across the crux of the story. The complex interactives come equipped with a note to help the reader navigate and understand the storytelling process.

Ultimately, it comes down to letting the story define the mood, navigation and style of the visualisation. “If the reader feels empathetic and in sync with the mood of the story, we believe we have achieved the intention of the project,” says Ravishankar.

How does The Federal’s data team decide which visual would land most effectively with the audience?

The team’s target audience is mobile readers between 22-40 years of age, who are exposed to and comfortable with technology, are politically astute and generally in sync with global news. Keeping this in mind, the team focuses on covering politics, art, culture, education, health and technology.

Context is one of the most important things they rely on for striking a chord with the audience.

“Creating nice visualizations and putting them together as a story or an interactive is not just an exercise in providing information to our readers,” says V. Srinivasan. “After all, there can’t be one size that fits all.”

After having published over 45 visual stories, the team agrees that it is the seemingly insignificant things such as color, arrows, text, and other visual cues, that help viewers interpret information.

“Normally, readers tend to spend more time on interactives as compared to a text-based story,” says Devi Prasanna Pradhan, Manager – Marketing and Branding. “The interactive projects add to reader loyalty, which is proven by the fact that their return rate is higher compared to those who come back for textual stories.”

The process – ideation to execution

Prathap Ravishankar, Design Editor at The Federal, says that on an average, it takes about 3-4 weeks to finish a big, complex project like the award-winning Mars project, whereas the team wraps up a simpler project in about a week now, as compared to two weeks when they started out. 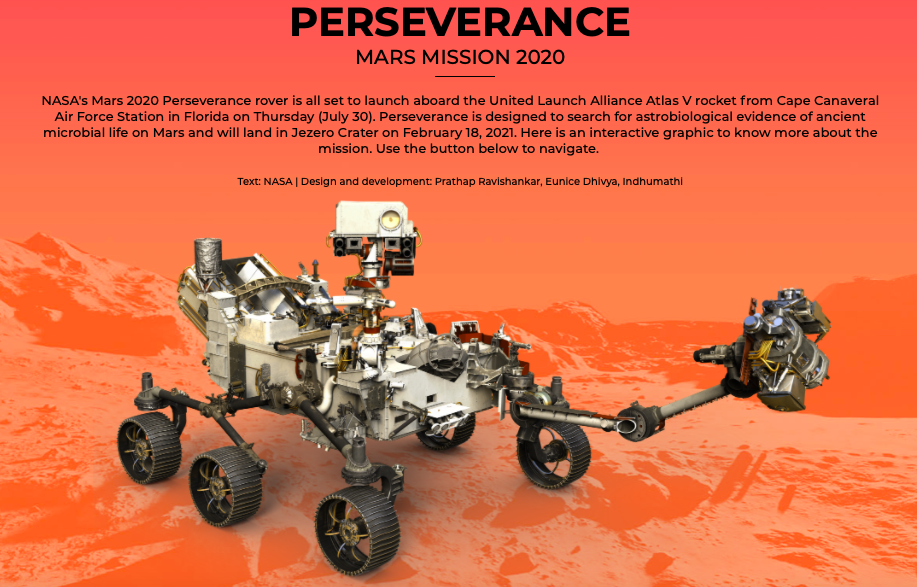 A typical day in the data visualisation department starts with a 9 a.m. meeting when the team  discusses ideas for the day and decides on potential topics for interactive projects. Once a topic is chosen, the data team starts scraping and curating data, while the design team begins researching and collecting information. This process takes about 2-3 days, says Venkat Srinivasan, Senior Data Journalist.

After collecting the necessary information, the design team starts illustrating and working on the UI on Photoshop or Illustrator. The interactive is actually laid out as a print mock-up and the content is simultaneously sent to the desk for proofreading and adding elements such as subheads, captions, etc. This takes another 2-3 days.

During this time, the developer team is briefed on the scope of the project and they start discussing the tools and libraries needed for the project, and lay out the necessary groundwork before the creatives and content reach them. This process takes a week.


The development team then works with the design team to get the artwork and text in place with the workflow. Once that is over, it is moved to a testing environment to check the final browser and device compatibility before publishing.

The Federal launched a ‘Freemium’ paywall model in November, last year. This means that about 97-98 percent of the website content remains free while the rest is monetised through reader revenue.

Currently, the data visualisations are not behind the paywall but the possibility of making them subscription-based in line with its Freemium model exists as and when a monetisable opportunity presents itself.