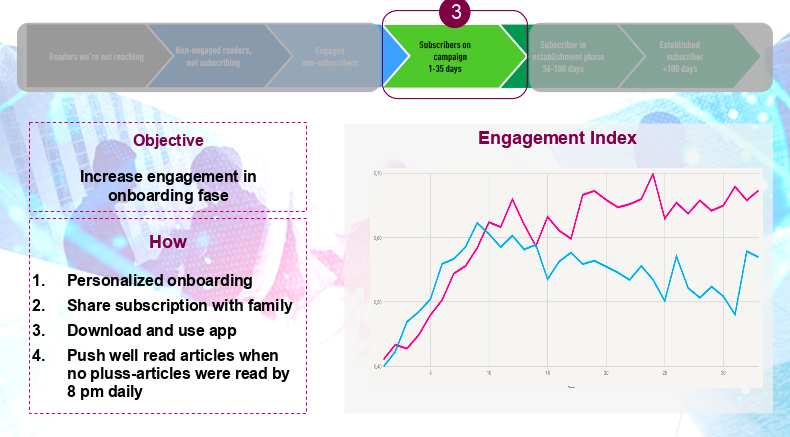 Amedia owns 79 newspapers in Norway with a total of 2.4 million daily readers, which is almost half the country’s population (5.3 million). A typical Amedia paper has approximately 8,000 subscribers and 22 journalists. Altogether, the company employs about 900 journalists and has some 1.6 million registered user accounts, and around 670,000 subscribers.
“Our vision a few years ago was relatively simple: We had to sink all our data into one big data lake. And we had to be able to power relevant and personal experiences in real time and across all customer-facing touch points,” Johansen said during WAN-IFRA’s Digital Media Europe conference.

120 data points for every user

“We have to have the customers logged in. That’s the No. 1 key,” Johansen said.
In 2014, Amedia created its own provider ID solution because they wanted to own the data, which informs all business development in journalism, subscription and advertising. They use mobile phone numbers as the unique customer ID.
“Because we have the mobile phone number, we are able to attach 120 data points for every single user that we can capture through their reading habits and also their third-party data. Third-party data will tell us their specific location, their age, income and so forth,” Johansen said.
In 2019, Amedia launched a churn reduction project.
“We used a ton of data, everything we had from customer service to readers to understand what the key drivers of churn are at the various phases of the customer journey. That gave us a good framework of where the biggest business impact was to prioritise our efforts,” he said.

Social media is used to encourage reader visits and for acquisitions. Around 25 percent of subscription sales originate through a Facebook post or promotion, Johansen said.
However, with so many small newspapers, it is impossible to centralise social media operations, so each newsroom is responsible for doing its own, he said. But he added that Amedia has provided dashboards to help journalists decide which articles to promote and publish.

“If we have the history of the reader, we can figure out what kind of article that reader is most likely to read,” Johansen said.
Amedia then promotes articles they think a potential subscriber has a high likelihood of clicking on along with a marketing message to “Try us for 10 crowns for 10 weeks.”
By enhancing its data, Amedia has personalised its onboarding programme. New subscribers who have not visited the site by 8 pm on a given day are sent an email newsletter suggesting articles they should read. This continues as needed for the first 35 days.
Advanced algorithms are used to send each customer tailored emails and newsletters that are based on his or her preferences.
Articles a user has already read are never included in the newsletter, Johansen said.
As with the onboarding phase, if a regular subscriber doesn’t visit their site for three days in a row, the person is sent an email with story suggestions.
Amedia sends around 50 million automated newsletters a year to their 670,000 subscribers. The open rate is about 34 percent, Johansen said.
He added that the newsletters have helped them to increase engagement and have boosted retention rates.

Amedia also makes extensive use of an Engagement Index tool, which rates a subscriber’s behaviour to determine how likely they are to keep subscribing.
“We use the Engagement Index in everything we do to see if it makes a difference in reading habits,” he said.
About a year ago, Amedia created a cross functional team (eight people from CRM / Sales / Technical / UX and Data Science) to reduce churn.
One of the things the team did was to rework the cancellation process across a number of screens users need to go through when they want to cancel their subscription.
Johansen said each screen helps to reduce cancellations. For example, one reminds a subscriber that his or her family members using a subscription will also lose their access. Each screen also contains articles similar to ones the subscriber has shown a preference for.
Today, Amedia is able to prevent around 1,000 cancellations every week. While he noted that this doesn’t mean a customer won’t cancel the next month, it has helped Amedia to take actions and lower the rate.
“These are astonishing results and provide great value both to our customers and the newsrooms. It makes the difference between growing a little versus growing at the high rate that we need to happen,” he said.