As the news media sector seeks new opportunities in today’s challenging media environment, new forms of collaboration are becoming increasingly common: between media companies and startups, and between journalists and developers. But cross-discipline collaborations are sometimes hindered by the lack of a common language.

This was one of the main learnings from the Media4Europe Summit, organized on 3 March and collecting 200 media professionals, key policymakers and publishers to learn about the importance of collaboration. The event also marked the launch of the second edition of the Stars4Media exchange and coaching programme for young European media professionals, which aims to launch collaborative projects over the next year.

Read the Stars4Media call for initiatives here and apply by May 1st, 2021.

The first session of the summit looked at partnerships between startups and media companies, as the news media is increasingly seeking collaborations across disciplines, borders, and between media companies.

“There’s a tendency to work in silos, and we should try to break this as a tradition in our industry,” said the moderator Stephen Fozard, Director of the Global Alliance for Media Innovation (GAMI) at WAN-IFRA.

The two speakers described how their organisations bring publishers and startups together. Lina Timm, the CEO of Media Lab Bayern, said that during the lab’s 6-year history it has connected over 50 startups to media businesses for joint projects. Overall, the startups have raised 24 million euros in venture capital, have over 100 clients, and have created over 250 jobs in Bavaria, Germany.

“For a new startup, the most difficult thing to get is the first client,” she said. “Making that connection is difficult. Media companies may think that when they hire a startup they get a perfectly built solution. What they actually get is passionate people who are ready to adapt their service based on the media company’s needs.”

What are the main needs that startups working with @MediaLabBayern @VRTSandbox have? 1) Contacts with media companies to work with, and 2) help with customer-centric thinking: showing media companies how to tell stories using their tech. #Media4Europe #Stars4Media pic.twitter.com/DgEMXxIEBl

Also Trees De Bruyne, Startup Coordinator at VRT Sandbox, emphasised the differences in cultures: “A lot of startups are so focused on technology that they forget that in the media industry, it’s all about what you’re going to do with that technology to tell the story,” she said.

The 5-year old startup accelerator is part of the Flemish public broadcaster and offers startups an environment to test and develop their products, with access to VRT’s content, tools and network of experts. VRT Sandbox also coaches startups in handling their relationships with their prospective media company customers.

“Clients will ask questions you never thought about. And it’s not data, it’s real people telling what they like and what they don’t like about your product,” she said. “You’ll end up developing a different product than you thought.”

How technology can help create trust

Building on the theme of technology and journalism spheres intersecting, the second session started with a presentation by Andreas Marckmann Andreassen, Digital Editor and Head of News at the Danish magazine Journalisten, on how newsrooms could build up their technology expertise. In his view, journalists should have basic data literacy, but they do not need to learn how to build algorithms or create automation software.

“Journalists do not have to know how to code. But we need people in the newsroom who can. We don’t have them today, and we are not good enough in attracting them.” 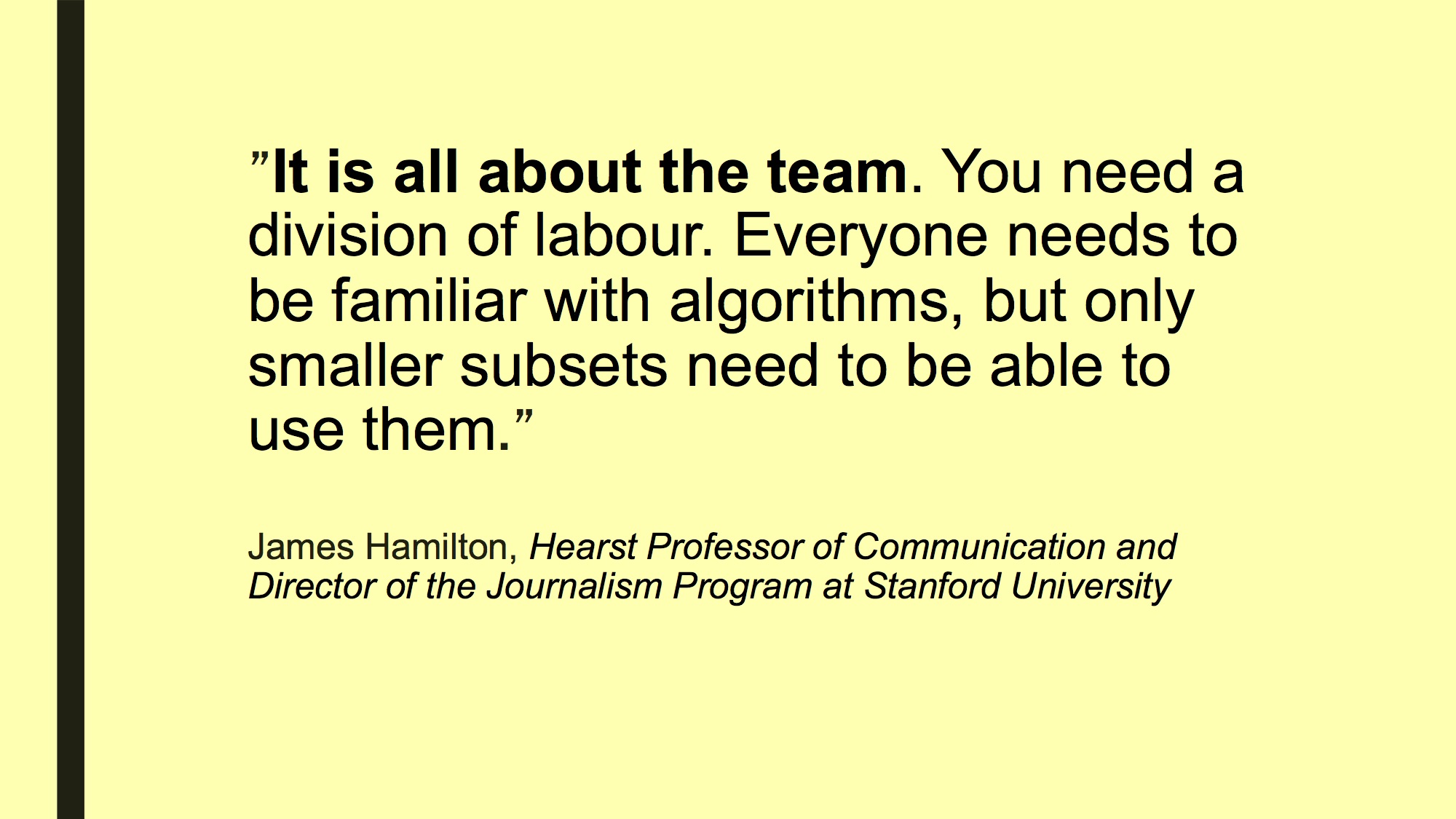 When you unite journalistic and technological worlds however, news publishers should prepare for culture clashes. Attitudes about deadlines are very different, since in the tech industry the “permanent beta” approach is well established: the work is only half finished when a project is launched. Journalism can also have a culture of open and frank criticism, Andreassen said, which can create problems in the workplace with people from other fields.

AI is of course a major topic for media companies today, with Schibsted perhaps being one of the most advanced publishers in this front. Agnes Stenbom, Responsible Data and AI Specialist at Schibsted, gave an overview of how the company’s publications use AI across the news production chain: from content creation, to distribution, and analysis.

Their use cases for AI include tag generation for news articles, delivery of ads based on editorial context (rather than user segments) and optimization of the printing and distribution of newspapers. Stenbom underlined the fact that while AI offers opportunities, it also brings many dilemmas, and many benefits have a downside that needs to be mitigated. 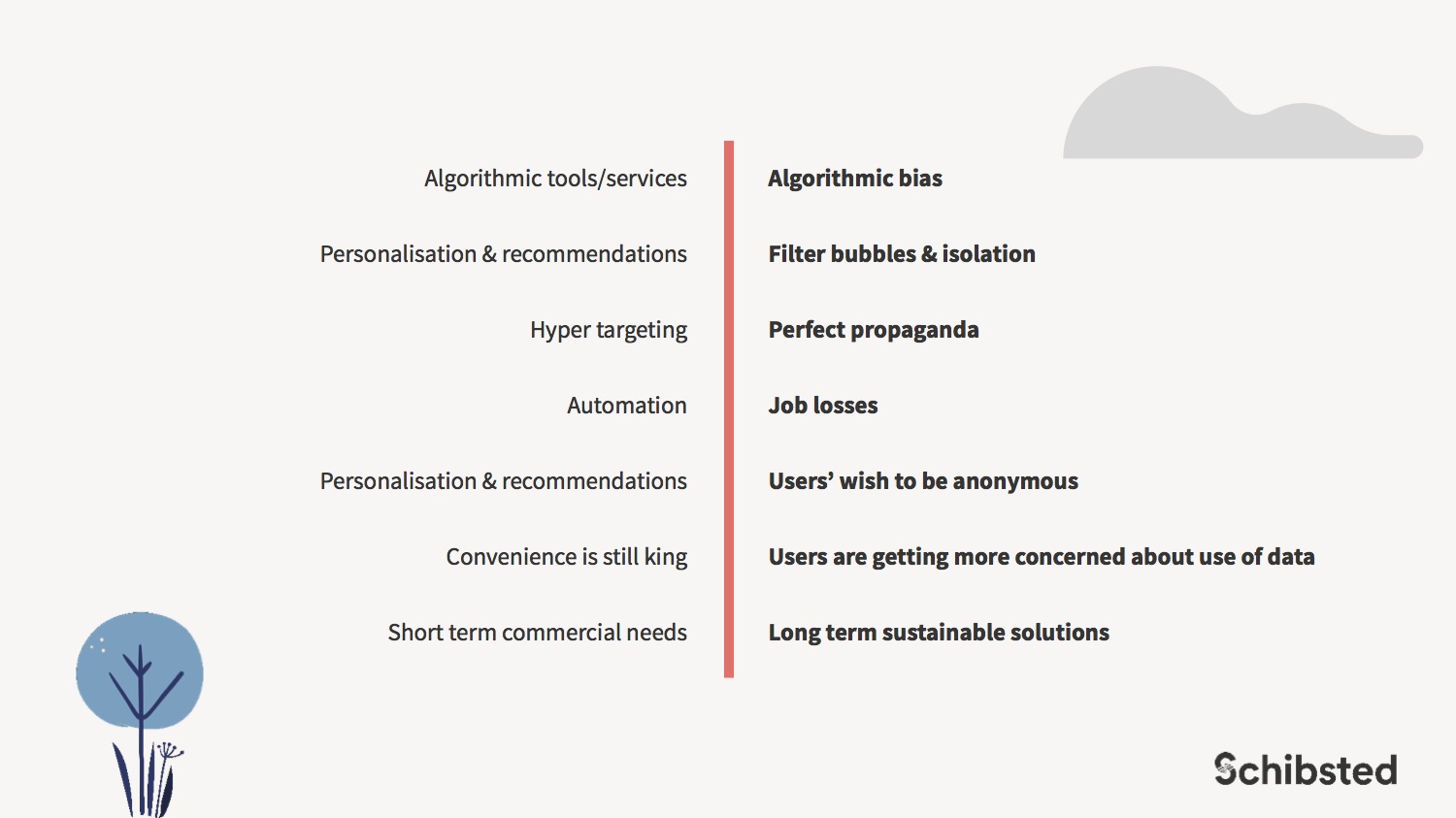 Timestamping is an open source solution for including a unique fingerprint (a “hash”) into each piece of content, which then makes it possible to verify if the piece of content has changed over time, and who created it originally.

This allows anyone to verify who was the first to publish a piece of content, and improves its SEO, as search engines can prioritise timestamped content. Eventually timestamping can help address misinformation, he said, as it can be used to filter out information that no one takes responsibility for. 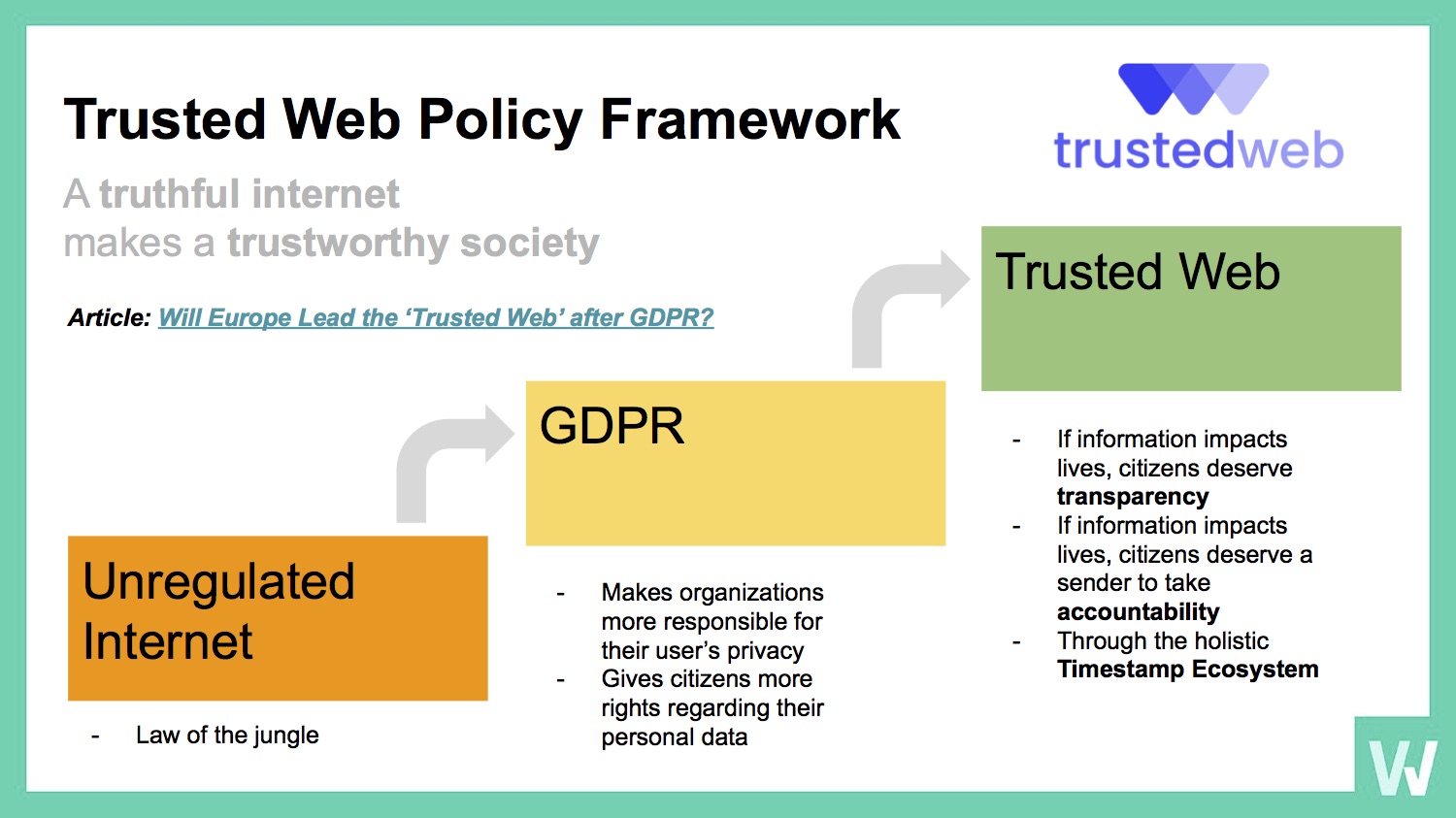 Finally, Denis Teyssou, Editorial Manager at AFP Medialab, talked about how new technologies can be used to support content verification, specifically through the lens of the Horizon 2020 project WeVerify, which has developed content verification and disinformation analysis methods and tools.

Combining newsroom and engineering expertise, WeVerify builds on an earlier project InVid. The WeVerify plugin currently has over 42 000 users and is especially popular as a Chrome browser plugin. In addition to being used by journalists and fact-checkers around the world, it has helped AFP with its fact-checking expansion: the agency’s fact-checking covers 18 languages and has a staff of almost 100, making it the largest fact-checking operation in world, Teyssou said.

If the tech and journalism spheres are often strangers to each other, what could be done to encourage smooth collaborations between them? One answer to this is social: Andreassen said that a developer working for a Danish media company told him that a one full year might pass without him seeing a journalist, until one would come and ask him to solve a problem.

“Having the ‘fix-her-up’ model is a very bad way of cooperating. Tech and journalism are part of the same thing, you need both competences in the newsroom at all times. That also calls for social interaction,” he said.

Interesting discussion at #Media4Europe Summit about the profiles needed for innovation projects. Developers and journalists may speak a different language, so media companies need to nurture collaboration between different professionals. pic.twitter.com/StvycgtY1T

The conversation also touched on the new kinds of profiles that are needed for useful collaborations. For example, Stenbom said Schibsted has started to involve philosophers in some of the internal discussions about the impact of its innovation projects.

“I’m not saying that every editorial tech team has to have an in-house philosopher. But I am definitely saying that on a case-by-case basis we need to reflect on the scale and on the stakes of what we are doing,” she said. “It’s important to consider what perspectives you need to bring to the table.”

The COVID-19 pandemic has shown that journalists, reliable news and information are more necessary than ever. It has also tested the weaknesses and limitations of the European media business model. At stake are jobs, the quality of information, and also media pluralism and independence – currently under threat in a number of EU countries.

“The health of the news media sector is directly related to the health of our democracies. And the diagnosis is unfortunately worrying,” said European Commission Vice-President for Values and Transparency, Vera Jourova, in her video address to the event.

The European Union has responded by investing in media and journalism via programmes such as Creative Europe, Horizon Europe and Digital Europe. “The Media and Audiovisual Action Plan, which is our roadmap for the recovery, transformation and resilience of the sector, includes the ‘NEWS’ initiative which will bring together all relevant funding opportunities and actions for the news media sector under a common banner,” added Ms. Jourova.

The event continued with a discussion about how policies could be used to help create a healthy European news media sector and what the media sector’s needs are. A summary of the this part of the event is available on Stars4Media.

(Photo by Annie Spratt on Unsplash)