The humble email is proving to be an important marketing tool for news publishers. Figures disclosed by Piano during WAN-IFRA’s recent Asian Media Leaders eSummit showed that emails – whether direct from publisher or containing links shared by others – had a 0.62 percent conversion rate, higher than direct access (0.24 percent), referral by Google e.g. Google Search, Google News (0.16 percent) or Facebook (0.06 percent) methods. 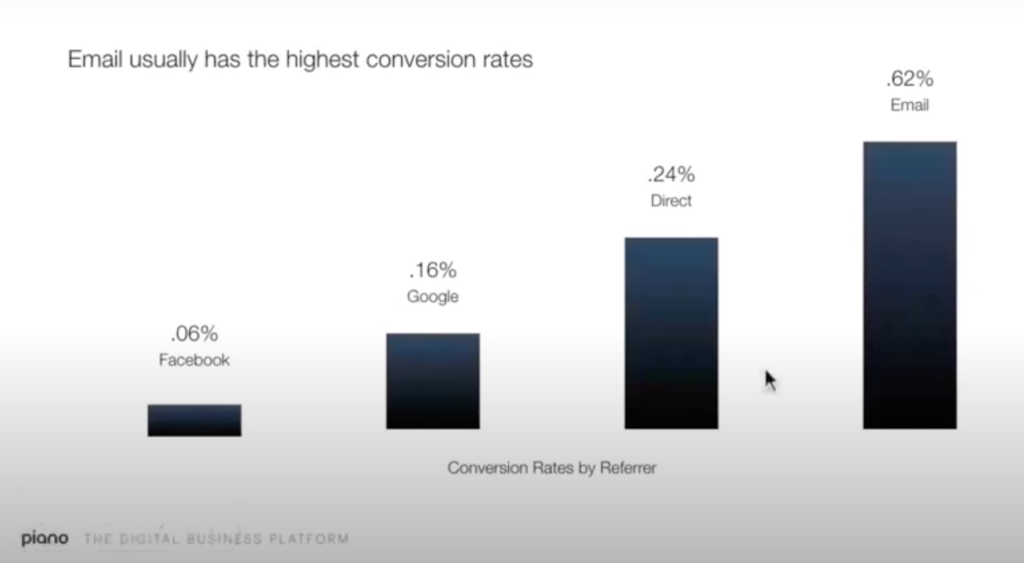 Email has the highest conversion rate among all referral sources.

According to Tim Rowell, Piano’s General Manager, APAC, who shared the digital business platform’s latest research on audience acquisition and retention, 68 percent of the readers among Piano’s 400 clients were first-time visitors. This reinforces the importance to entrench these first-time visitors by encouraging them to be more active.

“Engagement is where the money is. It is very important to let the first-time visitors know that this is a site on which the content is valued enough that you have to pay for it, and show them where the subscription site is.”

“If a visitor doesn’t convert on that first day, it can take weeks for them to convert,” he said.

Understanding the audience is key

Rowell also emphasised the importance of data to media businesses. He said: “A deep understanding of the audience and their behaviour over a period of time is really the way in which you can optimise and supercharge a subscription model.

“There isn’t one subscription conversion rate,” Rowell said, “You have a whole series of micro-conversions at every stage of the customer journey. But what we typically see is a new user comes in on the first day, what you’re really trying to encourage them to do is take that action to click on more content, which then makes them an active user. Once they become an active user, you really want to get them to register on your site. Once they become a registered user, you want to encourage them to purchase, then you want to present them with an invitation to subscribe.” 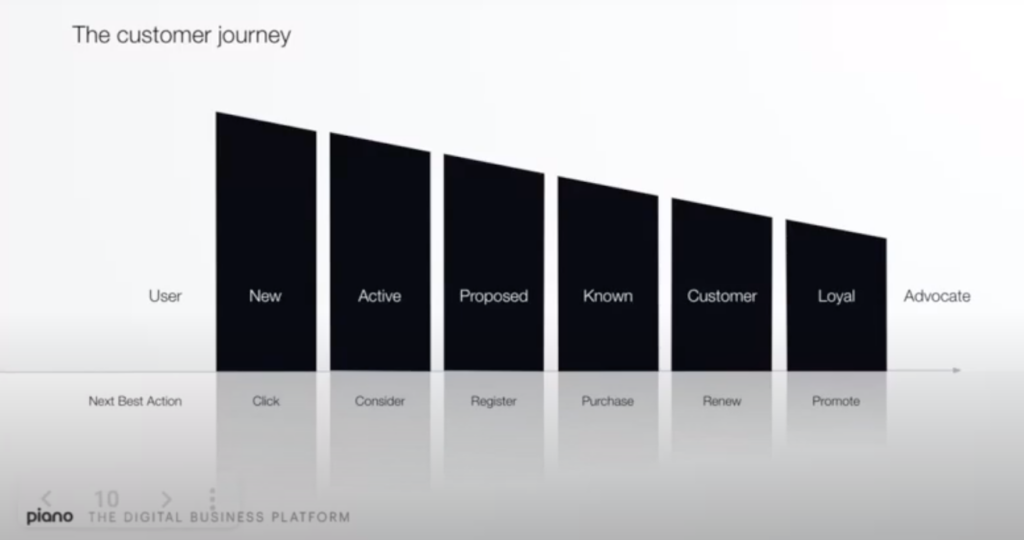 A view of the customer journey outlined by Piano, showing how users become advocates and the next best action for users to take at every stage.

‘You cannot be shy to ask people to pay’

Rowell added that publishers needed to directly and explicitly ask readers to pay.

Across Piano’s clients, only 7.7 percent of readers were being asked to pay. He said that the figure was low but “still much higher than before.”

“You cannot be shy to ask people to pay if you are running a subscription model.”

He differentiated between two requests: dismissible stops and non-dismissible stops. The former are promotional ribbons at the bottom of the site and the latter stops the reading entirely. Piano’s research has shown that the latter has a 283 times average conversion rate higher than the former.

Rowell highlighted the importance of personalised machine learning to enable the media to retain readers. “It can better target visitors based on the metrics that matter for [the particular media business], and allow them to target the reader at the point they are most likely to convert,” he said.

He emphasised that the conversion rate was related to every part of the business.

Rowell concluded by saying that publishers needed to have a more microcosmic understanding of data and in particular, conversion rates, to keep subscription models running.

Rowell said that a fine-grained understanding of users was key to “build that relationship [between publishers and readers] from the start.”

About the author: Xie Yihui is a philosophy student at Yale-NUS College and the editor-in-chief of The Octant, the college’s student newspaper. In her free time, she paints, sails, and eats sour fruits.

About the editor: Arulnathan John has had a journalism career spanning more than 20 years and has covered a variety of news genres for media agencies in Singapore.