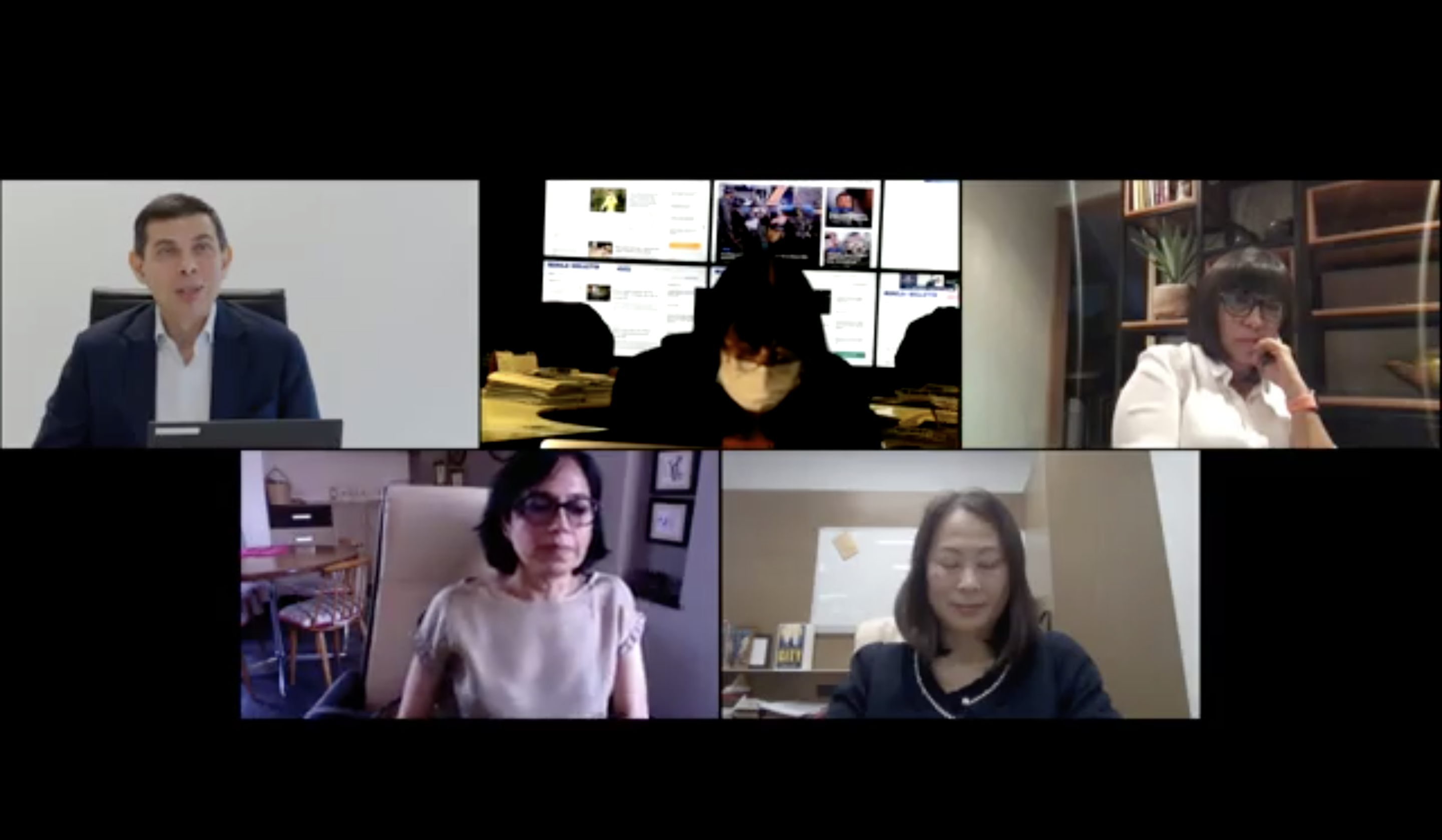 Should the current work-from-home (WFH) arrangement be continued even after the pandemic, Fernandez asked. The panellists said their staff members were receptive to the home-based shift of the workplace, due to mindset changes and access to technology.

It provided flexibility and choice for reporters. Kapur highlighted that WFH benefits those who need to take care of children at home, saying that it was “so empowering for some of our women colleagues who were either expecting or had a baby during the pandemic, or have young children.”

Tam concurred and said she expected partial WFH arrangements to continue after the pandemic. In order to formalise the change, SCMP’s leadership team adopts a “60-40 model,” where staff members spend 60 per cent of the time in the office and 40 per cent at home, subject to the approval of their supervisors.

Another unexpected silver lining of WFH was that the distributed newsroom provides opportunities for more localised reporting. When Kapur encouraged her young journalists to move back to their home cities rather than live alone in big cities to minimise risks, that led to more on-the-ground stories around the country: “In the process, we discovered the amazing power of a distributed newsroom because suddenly we had reporters and team members in [different] parts of the country,” Kapur said.

This change enabled her newsroom to benefit from “the depth of reports and the geographical spread across the country” as reporters could now report on the ground from different locations, something “that [they are] definitely going to hold on to,” she said.

However, there were also challenges that needed to be contended with, of which Tam highlighted team-building and the lack of work-life balance as examples.

The mental and psychological toll on the reporters during the pandemic is well documented, but leaders are taking action to address the issue. In a survey by WAN-IFRA in late March, some 83 percent of editorial executives said they had daily check-ins to monitor staff well-being, 38 percent said they had guidelines for maintaining mental health, and some 35 percent had access to health hotlines or resources.

The need to eliminate contact has accelerated newsroom digitalisation. The panellists agreed that technology’s role has become more pronounced and expected the trend to continue in the future.

Concha Colmenares painted a future newsroom with “fewer humans and more machines”, where people would communicate with one another through digital platforms, and many large monitors were dedicated to different types of news and purposes.

While the futurist vision is worth striving for, other editors pointed to the need to focus on the current basic technology. Ramos Sosa highlighted the importance of imparting skills that were basic but essential for reporting: She said: “We went to basics, sometimes just to make sure [the reporters] were working with the tools they need.”

“We’ve been trying to do a lot of training in other ways of making stories, how you can get access to documents from the internet, how you can analyse some of the things that are going around the world, how you can record an interview that you have on the phone… Things that some may think are very easy but are not,” she added.

Tam emphasised that humans still had to ultimately use and implement the available technology. She said: “To me, technology is technology. After all, for quality news production, people are still the most critical factor. People cannot be replaced just by data and AI, we need to learn from the data analysis, and then we need to make proper editorial decisions. ”

Fact-checking and quality journalism are important

The sudden and unprecedented nature of COVID-19 has again proven the importance of fact-checking and quality reporting. The panelists agreed that earlier in the pandemic, reporters had to gather and interpret credible facts while misinformation and confusion still abounded.

Kapur shared that The Quint’s fact-checking team had been crucial for their pandemic reporting: “One of the trying needs at the time of the pandemic outbreak was getting news across fast. There was so much misinformation about the virus, about how it impacts you, where it came from, who should be blamed for it. And I think the fact that we could immediately get on fact-checking teams to focus much more on COVID-19 was good. ”

Kapur was concerned about the lack of opportunities for the younger reporters to observe their seniors in the newsroom. She said: “While we have orientation sessions and training sessions, they are not quite the same thing [when conducted online].”

Fernandez stated how the crisis has highlighted the importance of public service journalism when credible information is closely linked to matters of life and death.

For Ramos Sosa, the future of the newsroom can also be framed as the “future of viewers” and the question of how to serve them is still relevant: She said: “ At the end, consumers, readers, and viewers are the ones that will keep our business going. So who is reading us, what do they really want, what are they willing to pay for, that’s a huge question we still have.”

Other panellists also voiced the importance of delivering quality news, to which Ramos Sosa said on a closing note: “We (the journalists) are the ones that are telling people how history is going, day by day, and we are privileged to see what’s going on, to be critical of what we see, to be telling people everything we are learning or understanding. And we need really good journalists in our newsroom, we need to prepare people for this mission. ”

About the author: Xie Yihui is a philosophy student at Yale-NUS College and the editor-in-chief of The Octant, the college’s student newspaper. In her free time, she reads, sails, and eats sour fruits.

Edited by Arulnathan John. Arulnathan John has had a journalism career spanning more than 20 years and has covered a variety of news genres for media agencies in Singapore.