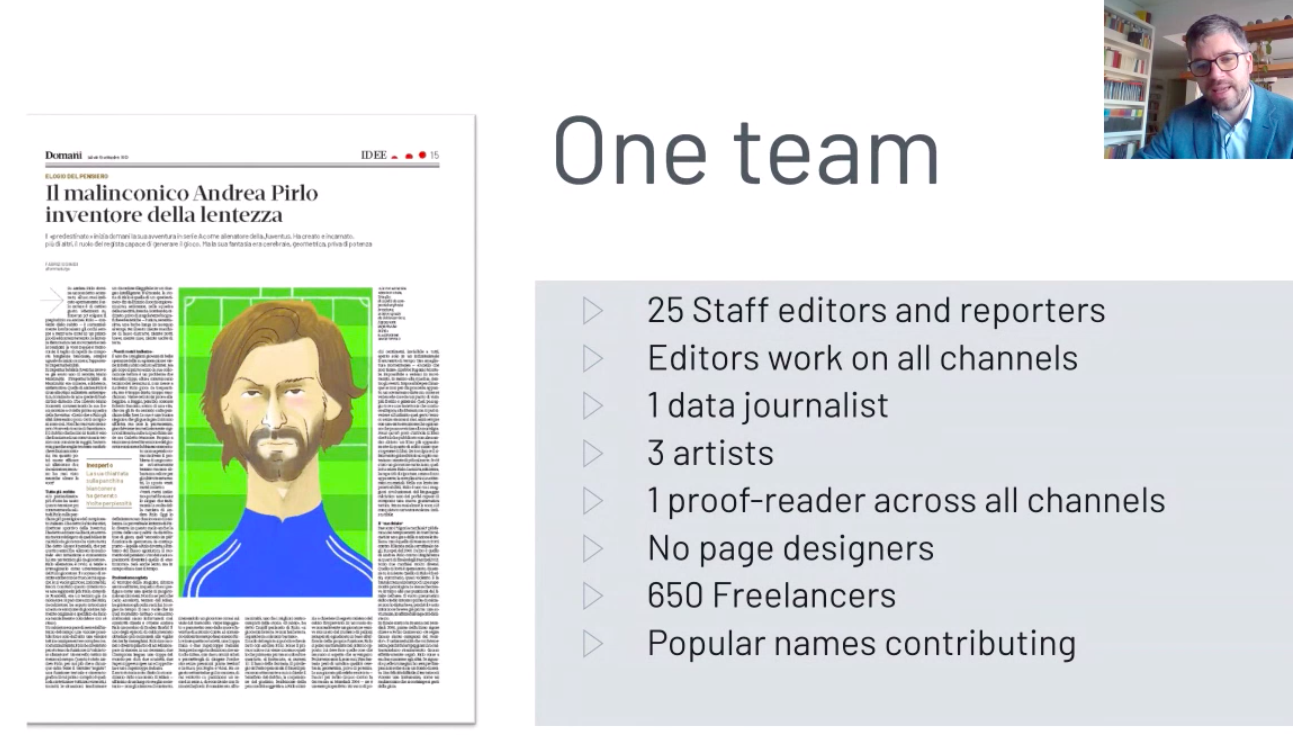 Domani is among the very few newspapers in the world that started publication during the pandemic. Its publisher, media mogul and former owner of La Repubblica, Carlo de Benedetti, and his start-up team believed people would pay for high-quality journalism.

Six months into its launch, Domani has reached 70 percent of its target subscription for 2021, with 26 percent of its readers in the ages 18 to 26. It has also established itself as a strong news brand in Italy.

“We are pretty optimistic,” said Feltri, during the recent Asian Media Leaders eSummit.

The paper’s success is based on running “a very lean newsroom” that is focused on investigative journalism and analysis, he said.

“Our brand is getting stronger and stronger,” Feltri said. “We broke so many stories regarding Italy that we are closely monitored.”

He added the paper’s stories continue to attract readers, with unique user growth of 20 percent month-on-month. “When we have something special, people react in a very positive way,” he said.

Print and digital, but a digital-first workflow

Domani publishes in both print and digital, but central to its business model is designing the publication around a digital-first workflow, said Feltri.

With a goal of breaking even in less than three years, “we were very focused on reducing our cost since the beginning,” he said.

The publication also aimed to be self-sustaining through paid subscriptions and advertising.

To build subscriptions, three months before its launch Domani began creating a community on social media and through newsletters.

It broke investigative stories online before launch as part of its strategy to “ask our prospective readers to share with us the journey to the goal line,” Feltri said.

Domani’s newsroom comprises a single team of 25 staff editors and reporters, one data journalist, three artists, and one proof-reader.

It contracts out its page design and uses templates to “have a very lean workflow with no additional costs,” said Feltri.

The paper also engages some 650 freelancers, including “famous writers, intellectuals, scientists, economists, actors…hundreds of well-known people who contribute to our newspaper,” he said.

To manage its hundreds of contributors and their stories, Domani partnered with publishing software and content management provider Atex.

Writers and editors use the same text editor, which eliminates the “terrible and harmful email flows” that result when people send revised versions of their articles “to the wrong editor so each different editor has a different version of the articles,” said Feltri.

Stories are first published online and throughout the day on the web. Editors who worked on digital versions also fit the same articles for print using templates.

These templates, he said, are deliberately clean and simple, with few elements.

“We do not spend time in tailoring every single page,” he said. “We do not spend hours having summaries and small tables and all the stuff that are created just because editors do not really expect that readers read the article. Our assumption is that if readers pay to read something, there is a high probability that they really want to read something, so we just give them the article and we put the article at the centre of our strategy.”

The Atex platform also enables multimedia customisation, responsive design, and paywall management. “We have a very short version of every article that is available for free but the main article is for subscribers,” said Feltri. “We want to protect our subscribers because we asked them to pay, and we need to give them something that is valuable.”

“We are still sticking to our three-year breakeven goal. We’re not there yet, but we have many ongoing projects to accelerate the process,” Feltri said.

About the editor: Bill Poorman is an editor, writer and media producer, living in the US after six years in Asia.