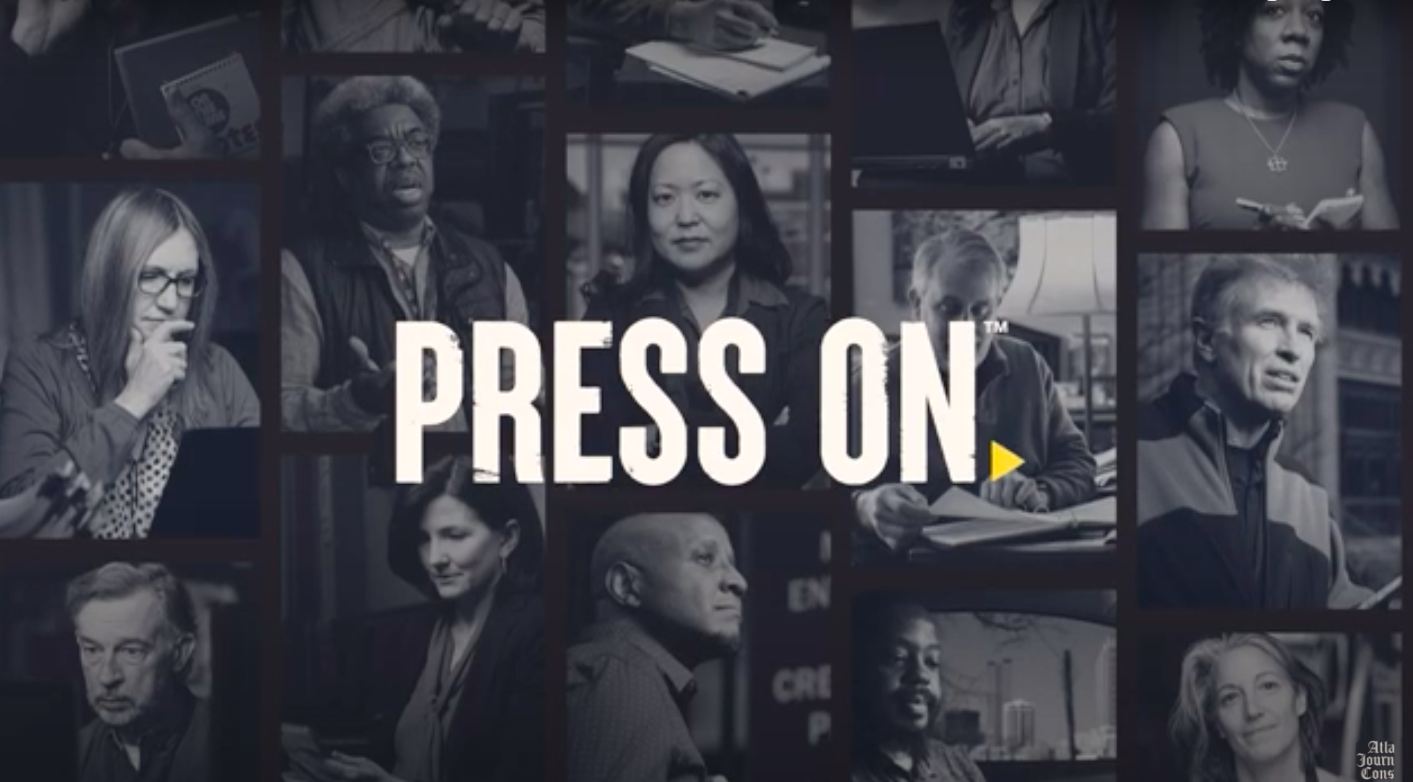 Above image, The Atlanta Journal-Constitution’s new Press On marketing effort focuses on specific journalists and the public service they provide to the community.

“If your business is reliant on advertising as principal revenue, I don’t like your chances,” said Phillip Crawley, CEO and Publisher of Canada’s The Globe and Mail.

The COVID-19 pandemic has revealed that multiple revenue streams are essential to sustain independent journalism, with reader revenue being the most important stream, said Liu.

Reader revenue, the direct exchange of value between news publishers and readers, has not been the pan-Asian standard, acknowledged Liu, who said that its introduction continues to be met with some scepticism in the region.

“In just the last eight months, we have surpassed the total number of subscribers that SCMP had accumulated over decades of selling newspapers directly to consumers,” said Liu.

The Atlanta Journal-Constitution (AJC), which ended 2020 with a 23% decline in ad revenue, has seen the pandemic accelerating their long-term strategies from print to digital.

The runway for this transition has shortened from three to five years, to one to two years, said Publisher Donna Hall.

The AJC’s paywall, relaunched in October 2020, led to a growth of 17,000 subscribers in 6 months. 8.5%-9% of readers hitting the gateway become subscribers, and the AJC has seen the lowest churn in the past 10 years, said Hall.

Crawley said reader revenue now makes up two-thirds of The Globe and Mail’s total revenue, with their business category being the biggest draw for subscribers, accounting for over 60% of new signups.

“People reading business, finance and investment content will keep on paying if they believe there’s money in it for them to grow their own portfolio or to help their business,” he said.

SCMP and other Asian news publishers have found that the success of reader revenue initiatives depend greatly on communicating to readers that journalism is worth paying for as it serves a daily and present need, said Liu.

Hall spoke about the AJC’s role in covering the COVID-19 pandemic and social unrest in Georgia, saying that the paper would soon be kicking off their largest marketing effort in years with a campaign focusing on specific journalists, humanising their work, and their public service to the community.

Hall dismissed concerns that releasing details of journalists may put them in danger, saying: “I think just doing the jobs themselves puts them in harm’s way, I don’t think highlighting them with photos and marketing will put them in greater harm’s way, and I pray I’m not wrong.”

“Both first-party data and Artificial Intelligence will quickly become differentiators in the digital advertising world, as soon as third-party cookies are deprecated across the internet in 2022,” said Liu who added that news organisations would need that differentiation to compete with platforms for advertising spend.

He added that news companies no longer serve the average reader, and instead cater unique experiences to individual readers.

The SCMP has found a solution to this by developing their own proprietary data analytics tool, just as The Globe and Mail has with Sophi (which the AJC will soon be using) and Kompas Gramedia with Jixie.

Sophi is a suite of artificial intelligence tools responsible for placing most of the content on The Globe and Mail’s digital pages and toggling a dynamic paywall.

“With Sophi, engagement among registered readers rose by 25% and subscription conversion increased by 15%,” said Crawley. 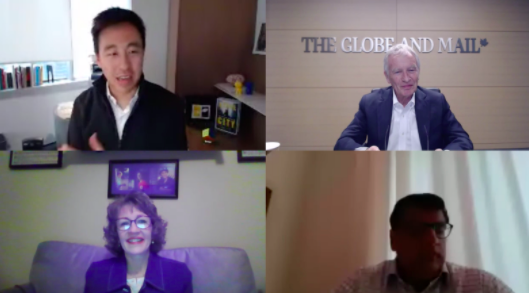 Building a data-driven culture in newsrooms

Newsrooms are usually full of sceptical people, said Crawley, but support from the Globe and Mail’s EIC, CTO and revenue officer was key to building staff confidence in Sophi.

Their staff have embraced the competitive advantage the tool gave their company and have a high degree of confidence that Sophi is helping them to pick the right content at the right time to maximise content growth.

“Journalists every day want to see their Sophi scores: to see how many subscriptions they’ve converted, how much traffic their story delivered, how they contributed to retaining readers, and what kind of pickup they achieved on social media,” he said.

Kompas Gramedia’s newspaper delivery service was eating into its earnings, but the group realised that their circulation capabilities lent themselves well to e-commerce fulfilment.

There was a gap in the market in second-tier cities, where Kompas Gramedia’s newspaper deliveries had been going deep for decades. The group partnered with e-commerce platforms to fulfil these last-mile deliveries, a venture that has yielded 15%-20% profit margins.

While building a digital base of subscribers is still high on Kompas Gramedia’s priorities, e-commerce and logistics make up over 5% of the group’s revenue.

Along with subscriber-only and B2B events, the AJC is exploring philanthropy from large foundations wanting to fund extended coverage on areas they are passionate about as a revenue stream, said Hall.

The AJC has seen early success through a Report for America grant for greater and more in-depth coverage of the Asian population in the Atlanta area, she said.

In light of recent legislation and platform deals with Australian news publishers, panellists spoke about their views on how the industry should interact with platforms.

Single market regulations are an important first step, but will have limited impact on long-term regional sustainability, said Liu.

“As global advertising revenue grows, there must be an equitable economy. Our industry should not be scraping for pennies on the dollar in the future. It’s really important that we build a model that works for Asia, where the marketplace is complex, and it is fragmented, where there is no central regulatory body and where many news companies, like the ones represented in this summit, are by nature cross-border,” he said.

“Be careful what you wish for. Depending on governments to help pay your bills is a slippery slope that risks loss of editorial independence, and puts you at the mercy of whichever politicians are in power,” Crawley said.

Before working with Google, the group’s app-to-web users were less than 10%. Google sent in teams to audit their app and provide specific recommendations, and that number now stands in the double digits.

“What continues to be a work in progress is the monetisation side and how they can improve cost per mille (CPM) for us,” he said.

All three publishers said that they expected about half of their staff to want to remain working from home even post pandemic, and would have to re-think their need for space.

But the publishers still shared their concerns about the impact working from home had on company culture.

Hall spoke about maintaining high levels of communication with employees through regular town halls and small group coffee chats with rotating members of the AJC’s leadership team and employees who did not usually work together.

“What we’re missing a lot is water cooler chats with people you wouldn’t normally speak to,” she said.

Crawley holds dialogue sessions with employees called “15 minutes with Phil.” He said these sessions have sometimes extended to 30 or 40 minutes as staff fielded questions about the impact of COVID-19 on the business and working from home.

“I worry that we’re losing some of the sense of purpose that comes from doing independent journalism, just by the fact that people are not being able to meet, they can’t work and the teams they used to be part of… I will have to wait and see what the effects are when we do bring back half of the staff to the office,” he said.

About the author: Alysha Chandra is a fourth-year student at Yale-NUS College in Singapore.

Edited by Arulnathan John: Arulnathan John has had a journalism career spanning more than 20 years and has covered a variety of news genres for media agencies in Singapore.