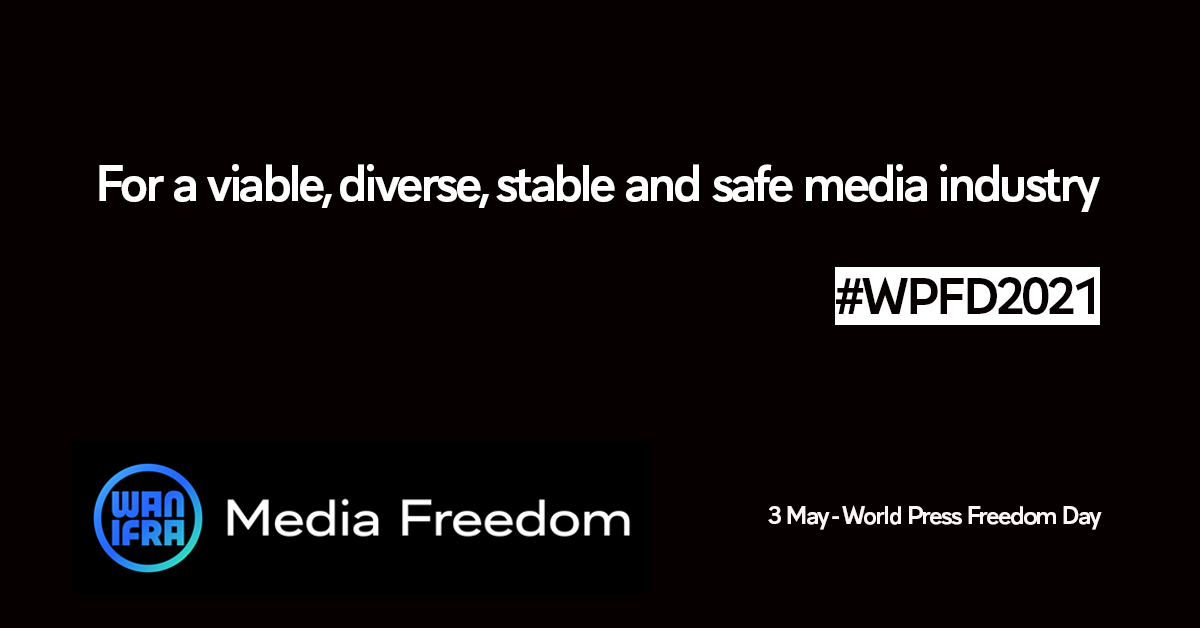 As we mark 3 May, World Press Freedom Day media across the globe are fighting threats both existential and immediate. The COVID-19 health pandemic has exacerbated, and in many instances accelerated challenges familiar to media owners, editors and journalists everywhere. The dilemma for an industry shrinking by the day and fast running out of money is that the biggest, most unavoidable cost is the journalism that, by its very essence, defines it.

Above all, COVID-19 has forced questions around the economic model and how media are financed front and centre for everyone with even just a passing interest in how news is produced. The insecurities that have been corroding the industry for over two decades are now circulating wildly and devastating newsrooms and boardrooms worldwide.

Many of the difficult questions facing the news industry are underpinned by an inability to predict a general economic model that will guarantee a future for quality, professional journalism. Digital ad revenue failed a long time ago to make up anywhere near the shortfall from traditional advertising sources. (The irony, during this global pandemic, is that media have generally seen online traffic soar, yet revenues continue to plummet).

Experiments with paywalls, subscription models, and shifts away from traditional news products have produced notable localised successes but are no one-size-fits-all panacea.

In developing markets, across countries where press freedom is threatened, or where huge disadvantages in skills and resources were already acute, the COVID-19-catalysed survival fight comes at a moment in which many media organisations are already on their knees.

Added to this, of course, are the new digital frontiers in which media continue to struggle to assert themselves. The ever-growing cacophony of social media channels – each account a direct competitor to media in terms of audience, ad share, and influence – has led to media jostling for a position in the digital society that they previously dominated in the physical world.

Contributing significantly to this decline in prestige is a pervasive, algorithmically confirmed bias that favours social discord, feeds off polarisation, and services corporate profit. The phenomenon slowly revealed itself during the latter half of the previous decade and showed media the deck is very much stacked against them, regardless of the quality, accuracy or trustworthiness of their content. The harsh reality: public interest reporting simply does not convert to advertising dollars – or at least not nearly enough of them to bet the house on.

But the potential for misuse, manipulation, or even the ‘weaponization’ of the algorithms has nowhere been more starkly illustrated than in the election domain – a pre-pandemic period of turmoil that shook democratic societies to their core. Just ask Maria Ressa (her company itself a product of social media), how speaking truth to power in the digital age has cost her.

The idea that the dominant tech companies are both part of the problem and an essential ingredient to finding a solution is unavoidable. As the gatekeepers of Eldorado, they remain in an immense position of relatively unchecked authority to determine the success – or failure – of the news industry at the local, national and international levels. The money involved is astronomical, but money alone doesn’t tell the whole story of the media’s dilemma almost a year and a half into the pandemic.

Journalists continue to be physically attacked, threatened – online and off – and killed in rising numbers. The pandemic has provided no respite, with over 600 COVID-19 related attacks documented to date.

The drastic social measures taken by governments around the world have been exploited, somewhat predictably, by those already averse to a free media as an opportunity to stifle freedom of expression, restrict access to information, and undermine critical reporting on their efforts. And as a recent study by DW Akademie sets out, adding to the economic strife, social and political attacks have media in every market fearing for the future of public interest journalism:

“Reliable information is especially essential in crisis situations — as COVID-19 has shown — and media outlets carry the heavy responsibility of providing balanced news, exposing abuse of power and corruption, and countering disinformation. Paradoxically, crises make it especially difficult for media to provide their audiences with relevant and balanced information whilst keeping their employees safe and maintaining their financial stability. Media professionals are targeted, media freedom is restricted, (self-) censorship increases and income sources break away.”

Along with the perennial goal of achieving business sustainability there is growing recognition of the nuances that drive success or failure in this regard; the contributing layers of complexity that go beyond the bottom-line economics of news production to help determine the overall viability of a news operation.

It is essential to understand the extent to which media are able to produce independent, high-quality content considering not just the economics, but also socio-political and technological factors that reflect the health of the overall media landscape and its place in the information eco-system.

These factors significantly impact a media company’s ability to thrive and effectively serve the public interest. Examination of the detail allows for a better understanding of the different issues at play, a more effective analysis of how they interact and interconnect to aide or hinder media in reaching their objectives.

Ultimately, a more accurate diagnosis of internal, structural and environmental concerns can lead to more effective, targeted remedies to arrest decline across the financial, professional and rights-based foundations upon which media rely.

While this thinking pre-dates the COVID-19 crisis, the pandemic has introduced an urgency to the need for holistic solutions to these issues that, for too long, have chipped away at media’s role in our societies and now leave many staring into an abyss of the unknown.

There are efforts – serious efforts – to find an appropriately scaled response in these critical moments, one that better interprets the factors which impact viability so that mistakes are not repeated. On the global level, WAN-IFRA’s work with UNESCO and partners aims to produce accurate research into the extent of the crisis, share knowledge and best practice of the varying responses to-date, and formulate policy recommendations aimed at governments, investors and the media industry itself on action to take to support viability.

Our engagement with the Independent News Emergency Relief Coordination (INERC) group looks to track investment into the news industry as a result of the COVID-19 crisis, with an eye to the longer-term structural challenges that have brought the old business model to its current state. WAN-IFRA’s World Press Trends report as well as research among members to document relief efforts, government subsidies, private capital investments and policy changes also gives an indication of the scale of the damage and the areas to prioritise as the industry rebuilds.

And responding to the need for a holistic approach, our media freedom work aims to tackle the challenges related to viability, diversity, stability and safety. For over 70 years, WAN-IFRA has put into practice the belief that business strength and the freedom to publish are symbiotic to a healthy, democratic society. Today, through an average annual investment of €3M of public funding from Denmark, Norway and Sweden, our work with members and non-members alike in over 120 countries extends beyond support in achieving business best-practice and editorial professionalism to prioritising gender equality through our Women in News programme and addressing safety, digital security, mental health and well-being concerns – all equally paramount to levelling the playing field and providing the best conditions for long-term success.

Underlining all of this, and while recognising the difficulties of capturing the many indicators needed to assess media viability, our work promoting basic stability – rooted in WAN-IFRA’s seven decades of experience and rich history of supporting the economic independence of media – helps guide our partners at every stage as they navigate the often difficult, increasingly urgent transition to digital.

Likewise, our network of Media Freedom Committees in 19 countries allows us to support local research and policy initiatives into pandemic responses across Africa and Asia, as well as organise newsroom training and improve business efficiencies in local media operations – all while advocating for greater press freedom. And over the past 12 months we have provided upwards of €300k in direct grants to media struggling to finance public interest reporting during the pandemic through our combined donor programme funding.

It’s a contribution, not an insignificant one, but unfortunately the scale of the global crisis now demands far, far more. Bold choices therefore lie before us; big decisions that will define and shape the next generation of news media. But there will be no solutions to any of this without a systemic reset or conceptually radical break from the ‘old ways’ of thinking and doing – otherwise a viable media industry confirming its place within a healthy information eco-system remains a fantasy. Likewise, fixing the economic model without also correcting disparities related to diversity and equality can in no uncertain terms be described as an advancement. The solution has to be inclusive. It has to raise everyone, otherwise the ‘universal’ descriptor of the human right to freedom of expression remains exclusive, caveated, and ultimately meaningless – just when we need it the most.

This article may be freely reproduced on or around 3 May 2021 with credit to WAN-IFRA and the author.