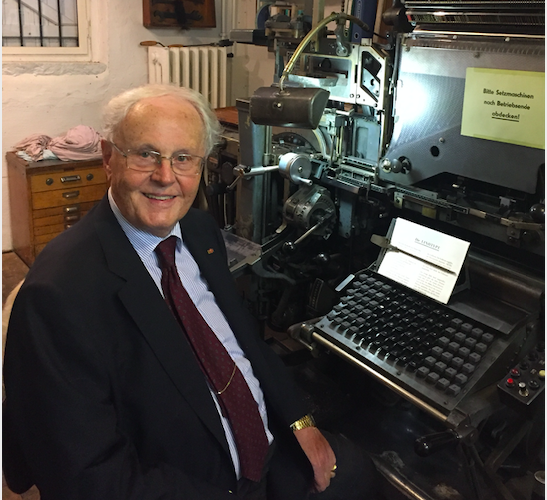 Above image: Dr. Wolfgang Kummer AG. at a hot-metal Linotype machine in the print shop of the Hessenpark open-air museum in Neu-Anspach, Germany, on 30 September 2017. Photo by Manfred Werfel.

Born on 10 May 1927, Kummer’s life in the printing industry seemed predetermined: in Wiesbaden, he attended the Gutenberg Gymnasium (grammar school), in Mainz the Johannes Gutenberg University, and his first job offer after graduation came from a press manufacturer.

He had studied law and economics at the Universities of Mainz and Berlin, had a scholarship of the University of Chicago Law School where he finished his doctorate theses on American anti-trust and patent law.

From hot-metal typesetting to desktop publishing

He started his business career at a German printing equipment manufacturer and went with Linotype Germany in 1957 where he became Managing Director in 1960 and in 1983 President of the worldwide Linotype organisation. When Linotype became a public German company and merged with the scanner manufacturer Dr Hell, he was also Chairman of the Management Board of Linotype-Hell AG.

Linotype machines were the ultimate typesetting tools of newspapers for almost 100 years. They produced hot-metal “lines of types” that could be arranged to columns and pages. The typesetting industry experienced significant changes during the last three decades of the 20th century.

In 1972, the originally American company Linotype set up a production facility in Eschborn, Germany, near Frankfurt am Main and moved the company headquarters there in 1974.

The year 1976 marked the end of the old Linotype technology. To the surprise of many experts, Kummer discontinued the construction of hot-metal typesetting machines.

Looking back, Kummer said in a 2019 interview: “Linotype was a mechanical machine manufacturer for a very long time. But at the end of the Linotype years a lot of electronic devices were attached to the last ‘high speed’ machines. The electronic perforator is a good example. So we had been employing in all our operations in the U.S., the U.K. and Germany more and more electronic engineers and programmers. But we had to learn the R&D budget for the development of electronic devices would be considerably higher than in the ‘old’ mechanical days … and the product life time became shorter and shorter. Not only Linotype as manufacturer but also our customers had to learn this. And – that one had to pay for something you could not see – software! We had arrived in another industry.”

By linking the typesetting technology with the computer industry, the Linotype Group began another economic boom. However, the systems of the various manufacturers were still based on proprietary hardware and software. This made it impossible to combine components of one manufacturer with those of others.

That changed only in the mid 1980s. In 1984, Linotype started developing laser film-imagesetters that were able to expose not only characters but also graphics and images in print-ready resolution of 2,540 dots per inch.

At the same time, Apple introduced the first Macintosh. And with the universal page description language PostScript Adobe provided the technology to connected input and output devices.

“The Linotype Group had with its type foundries like D. Stempel A.G., Haas in Switzerland etc., a rich fund of typefaces, many of them copyright-protected,” said Kummer about this period. “We licensed many to the computer manufacturers and were also approached by Apple for the use in their WYSIWG Macintosh.” (WYSIWYG = What you see is what you get)

Under the leadership of Dr Kummer, Linotype worked with Apple and Adobe to introduce Postscript-based publishing systems to the graphic industry. He recognised the potential of what was then called desktop publishing (DTP) early on.

Linotype developed the first high-resolution raster image processor (RIP) that enabled PostScript-based professional phototypesetting using Macintosh computers. The Linotronic 300 (for commercial typesetting) and Linotronic 500 (for newspaper production) were the first, and for a long time the only, output systems to be used for desktop publishing.

The Linotype company no longer exists. After a merger with the scanner manufacturer Dr Ing. Rudolf Hell GmbH in 1990, the new company Linotype-Hell AG was also taken over by Heidelberger Druckmaschinen AG in 1996.

The development of scanners and then film imagesetters came to an end in 2002.

“The printing industry […] was a relatively small market and it was just not economical to build your own proprietary systems any more,” Kummer said. “Therefore the text and image processing is done today on generally available computers and PCs. Almost everybody has a print shop today in his home with a Mac or PC front-end and an inkjet or laser printer as output device.”

Dr Wolfgang Kummer’s name will be remembered and associated with the management of a double technology shift in newspaper prepress and editorial technology that ultimately marked the transition from hot-metal typesetting to desktop publishing.