The Reuters Institute Digital News Report is an annual treasure trove of data and insight for anyone interested in the news industry’s business and audience trends, and this year’s 10th edition of the report – released today – is not an exception.

This article highlights a few major themes that emerge from the wide-ranging report: read on for a summary of its main findings on trust, business models, digital subscription trends, news consumption on social media, and the news habits of the young.

Trust in news is up almost everywhere

Reversing the downward trend of previous years, trust in news is growing: 44% of survey respondents said they trust most news most of the time (an increase of six percentage points from 2020). Moreover, 50% said they trust the news they consume themselves, up by four points. But the figures vary greatly between the surveyed markets, with Finland having the highest levels of overall trust in news (65%), and the US the lowest (29%).

On the other hand, the relatively low levels of trust in news from search and social media continues, meaning that the trust gap between news in general and news found on social platforms is widening. 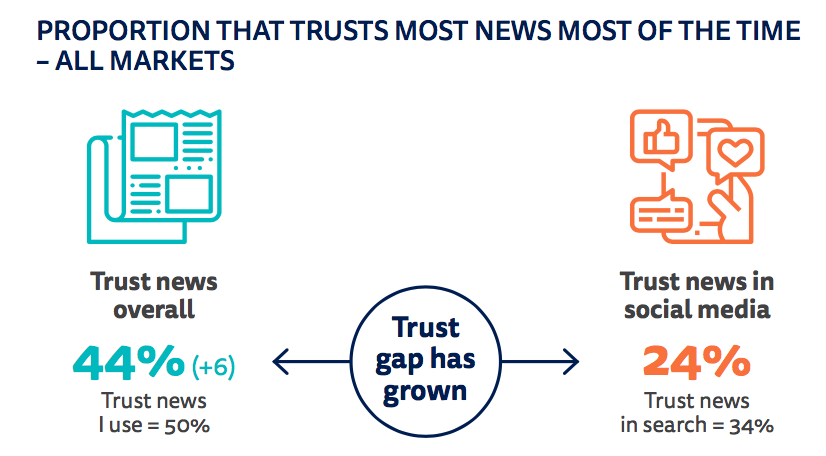 Declines in print are significant, and digital growth is slow

Print publications were hit particularly hard by COVID-19 almost everywhere, as lockdowns hampered physical distribution. Some of the steepest declines were in countries such as Switzerland and Germany, where circulation levels have traditionally been high. (On the other hand, the German newspaper publishers’ association BDZV told us that print REACH in the country actually increased by 5% in 2020, so perhaps in some markets the story on print readership declines is not as clear-cut as it may seem.) 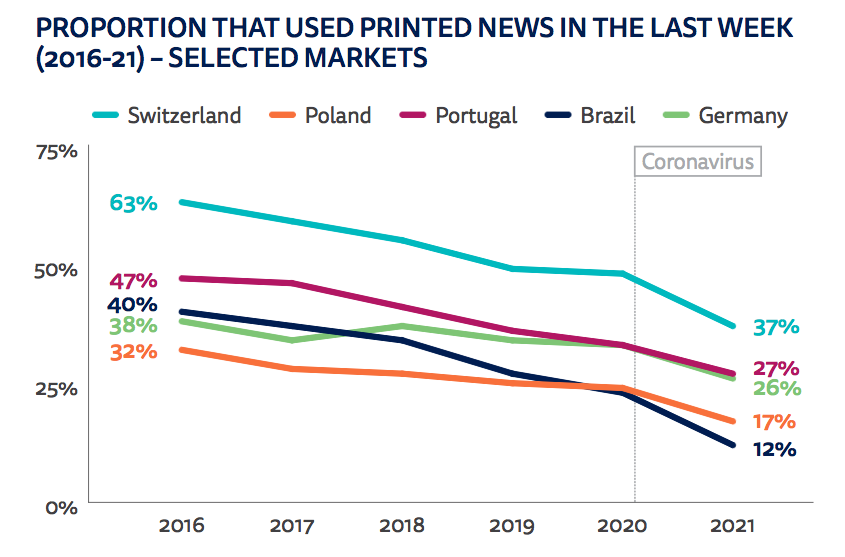 The switch from print to digital subscriptions continues, and a handful of wealthy countries with a history of strong print subscription levels are seeing the biggest increases in digital subscriptions. But despite a few positive examples, it still remains the case that the great majority of news consumers choose not to pay for any online news: only 17% of respondents said they have paid for online news in the last year. The number is growing, but slowly: it’s up by 2 percentage points from year before, and five since 2016 (12%). 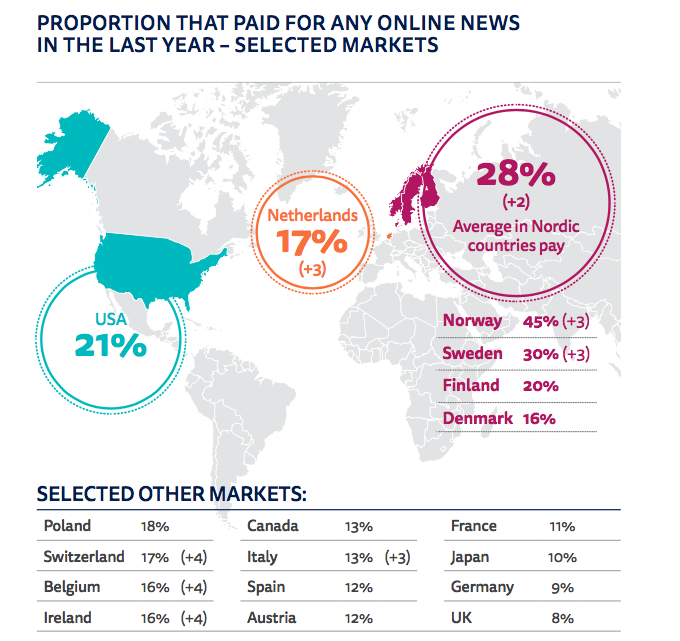 The direction of travel is clear, however: many major publishers started paywalls during the pandemic, and publishers are increasingly turning to different forms of reader revenue (subscriptions, membership, donations) to reduce their reliance on advertising – which online mostly goes to Google and Facebook.

From the news consumers who do pay for online news, the great majority take out just one subscription; the only exception is the US, where over half of those paying take out subscriptions to more than one title. It may be possible that the pattern of multiple subscriptions will become more widespread, but the report’s message on this is cautious:

“Subscriptions are beginning to work for some publishers but it is not clear that they will work for all consumers. Most people are not interested enough in news, or do not have sufficient disposable income to prioritise news over other parts of their life.”

In terms of devices used to access news, smartphone use is still growing fast (73%, up from 69% in 2020), while the use of computers and tablets is stable or falling. There are big regional differences, however: the EU average for using smartphone as the main news device is 54%, but in some countries the figure goes up to 80%. 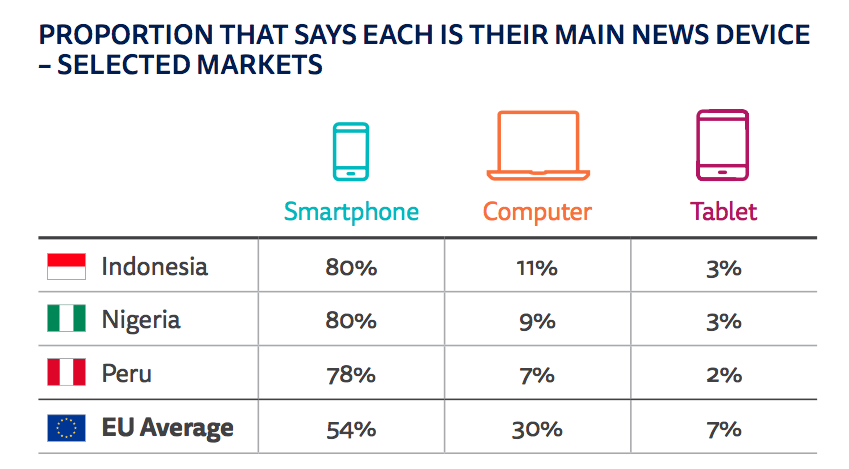 The survey data also shows that different social networks play very different roles in their users’ lives generally and for news consumption specifically. 66% of respondents use a social network or messaging app for news content, but the mix of networks is changing: Facebook has become less relevant, while WhatsApp, Instagram, TikTok and Telegram have attracted more news use. 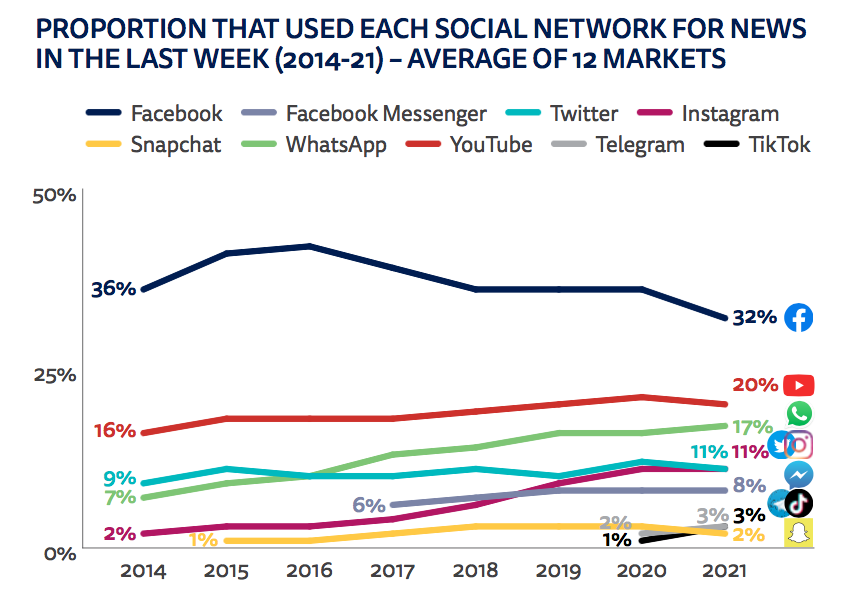 When looking at people’s motivations for using specific social networks, Twitter stands out as the platform that people choose for news content. Other networks are mostly used for other reasons such as entertainment – especially Instagram, Snapchat and TikTok. This makes it very hard to engage audiences on these platforms with news content, the report points out:

“Newer youth-orientated networks represent a significant challenge for mainstream media. News is largely incidental and the expectations of snappy, visual, and entertaining content do not always come naturally to newsrooms staffed by older journalists with a focus on traditional formats.”

The young are a different news breed

Speaking of young people, the report notes that the younger generations clearly stand out in terms of their relationship with news providers – or, rather, the lack thereof. For instance, while 25% of all respondents said that their main way of accessing news content is directly on a news publisher’s site or app, the figure drops to 18% among the under 35s, for whom social media and search are more relevant pathways. 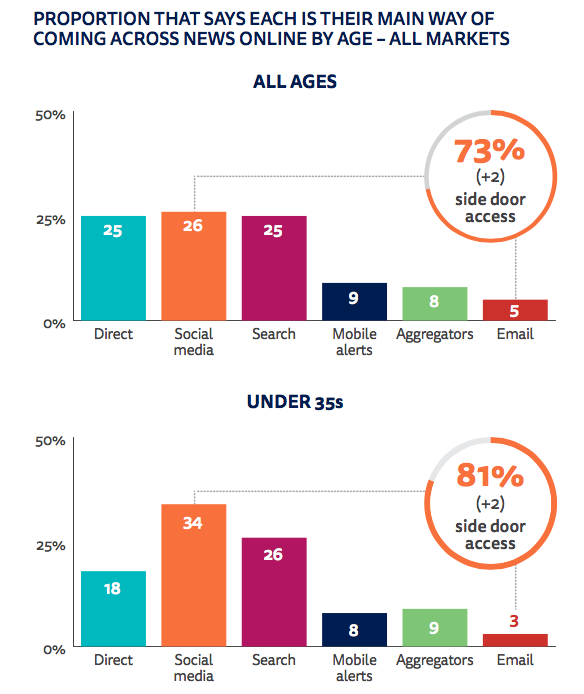 The report also notes that the under 25s (the so-called GenZ) have “radically different habits” even when compared with the preceding generation, the millennials. In addition to being less likely to visit websites, and more likely to use social media as their main source of news, this group also pays more attention to social media influencers who have an important role in framing conversations about news issues.

The same group also views the ideal of impartial and objective news differently, thinking that “impartiality” in the news coverage may not be an appropriate or desirable goal in some cases, for example on social justice issues. Connecting with this generation can be especially hard for publishers, the report concludes:

“Engaging these audiences is proving challenging for newsrooms that are mostly staffed by journalists who consume news in completely different ways.”