No matter the size or budget of your newsroom, there are still things you could do to be a data-driven publisher, says Julia Harris, Digital Subscriptions Manager, Arena Holdings.

“Regardless of what your revenue model is, data has become incredibly important in ensuring the future of media,” she says.

It is important for publishers to keep in mind that data is not a strategy, but a tool they can use to reach strategic objectives, Harris told participants of WAN-IFRA’s recent Middle Eastern Media Leaders eSummit.

Data can be overwhelming. It can leave one confused about where to start and what to look for.

“We use what the data tells us to drive decision making and answer the questions that matter to our business,” Harris says.

Arena Holdings is South Africa’s second-largest publisher with a digital readership of 13 million unique browsers every month. The company has six media sites with paywalls – four national titles and two regional titles, all of which use freemium models.

Their main revenue streams are advertising and subscriptions, and they are focused on data that will help them drive engagement.

Harris says some of the questions her team looks at include:

The answers to these questions help the team understand what content is behind user numbers and page view numbers.

“This is what underpins our ad-revenue strategy,” Harris says.

Whereas a publisher with a paywall should be thinking about data around acquisition, retention, what sort of content are users converting off of, where in the subscriptions funnel are users falling off, what is the biggest cause of subscriber churn and so on.

“Given the structure of our business, our ideal data team would start with the Head of Data – the person you put in charge of steering your strategy and managing the team,” says Harris.

“The next position is a data architect – they oversee the very technical aspects of data and ensure your systems function as they should. Ideally, we would have a data architect and a data engineer on the team. An architect ensures your data is effectively captured, organised, maintained. And then you have the data engineer to test and map and maintain that architecture,” she adds.

While it would be preferable to have both, resource constraint is the reality for many publishers. In such cases, Harris’s advice is to seek an architect who can take on some of the tasks of the data engineer.

“It’s about finding people who can tick a lot of boxes rather than specialists because I think having extreme specialists, unfortunately, is not really what’s possible when we are dealing with resource limitations,” she says.

Then comes the role of the data scientist who will work with big data and delve deep into modelling and the AI side of things, wade through unstructured data, and pull the key information and questions from that data.

The remaining members of the team would be an audience analyst, a commercial analyst for advertising, a subscriptions analyst and then a junior analyst to do some of the more manual tasks, Harris says. 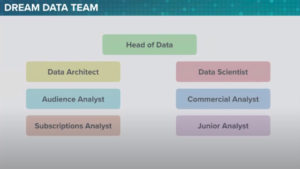 What to do in the face of limited resources

While it would be desirable to have a seven or eight-person data team, for many it may not be feasible. But there may be a few strategies to still make data work for the time being. One of them is automation. For example, Arena uses technology to minimise repetitive tasks.

“We found that our data team quickly became inundated with requests for data and spent too much of their time bouncing from one request to another. There was also a lot of overlap in those requests, says Harris.

At Arena, the team has primarily used automation in reporting and displaying data on automated dashboards.

“For example, corporate clients typically buy a number of licenses and that gets their company emails whitelisted,” Harris says. “Everyone with a certain email address gets access to our publications. These clients want to know if they are getting value for their money and if their employees are making use of this access. So our dashboard shows them the core activity stats for their employees without giving information on individual users.

“The same dashboard has been rolled out to numerous clients (with only stats differing),” she adds. “The dashboard updates automatically, so our data team doesn’t have to field requests for this data on a weekly or monthly basis. Clients are given access to the dashboards when their contracts start.”

The team also has automated much of their internal data allowing them to look at data on things such as where involuntary churn is happening, what factors are driving churn and so on. This way they can generate the report themselves instead of asking the data team to do it.

The second strategy that has helped the company immensely is aligning with strategic partners who helped to fill in some of the gaps on the internal team.

“The last point is empowering the newsroom with data,” Harris says.

“Not everyone in your newsroom will embrace data. But we have found that by approaching it in an open way and having frequent training sessions, we are really making some progress in this area,” she adds, citing the example of the editors dashboard which gives editors all the key information they need.

Now, what if you are a small newsroom running on a shoestring budget and looking for some free tools? Google Analytics might be a good place to start looking at data, Harris says.

“If you are short of manpower, focus on one data source,” she adds. “Focus even on a few metrics, and really nail that down. Focus on the things that are very important to you with one data source, and then take it from there and build around that.”