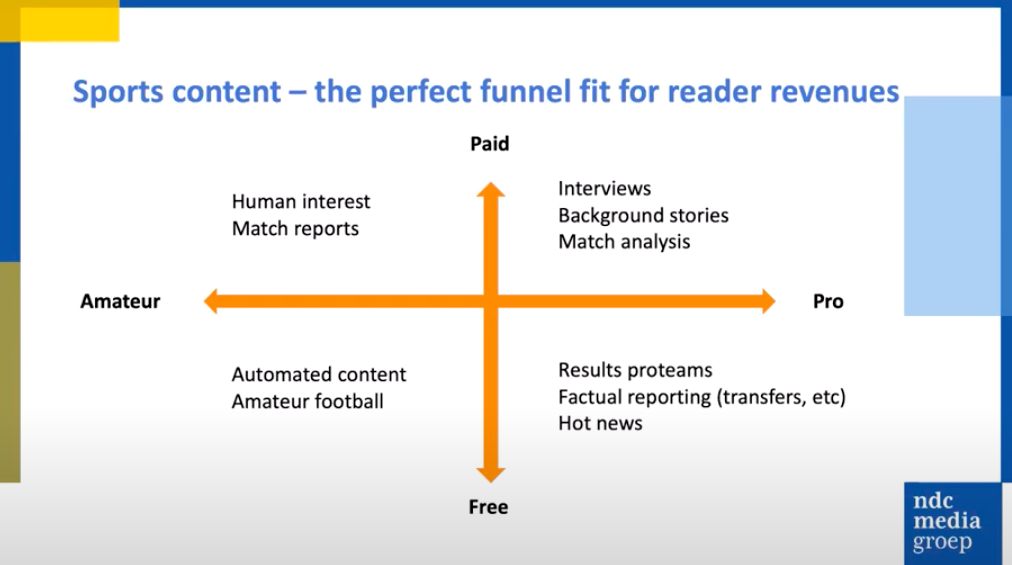 Dutch regional media group NDC, publisher of three daily titles and more than 40 weeklies, is ramping up for the first post-COVID football season with a promise to up its game and cover every single local match of the season.

That means more than 60,000 games – an ambitious goal far beyond the capacity of its news team.

So how does it plan to deliver on that promise? Through robot journalism, courtesy of Swedish tech start-up United Robots.

Ard Boer, Product Manager of Sports for the NDC Mediagroep, explained the impetus behind the decision to go to automation during WAN-IFRA’s recent Newsroom Summit.

“With no amateur football in the Netherlands for the last one and a half years, we are really looking forward to the start of a new season post COVID, so we were thinking what can we do to celebrate now that COVID is on its way out?” Boer said.

The conclusion they came to was to go big and include every amateur game going as both a service to the community, and an ambitious subscription drive.

“Amateur football and automatic reporting are going to help us transform readers to online subscribers.”

Boer sketched out what he normally has to do to keep up with his own nephew’s amateur football and how there are currently no articles about each game, about the ongoing progress, or the league tables, let alone any kind of feedback from people at the pitch. “If you could put all that together you’d have a really rich article and cover a lot of ground.”

By combining robot journalism and crowdsourcing, NDC believes this is possible.

“We’re trying to get some crowdsourcing with coaches supplying photos and videos and as soon as we have the official result the coach gets a text message saying ‘Hey, your team lost 3-0, what happened?’ They can explain, mention the players that were exceptional, or not, and all of this is automated.”

Despite the inevitable hesitation from colleagues, Boer recalls a comment from one who noted dryly that “with a new reporter you have to correct them 20 times, at least with a robot you only have to do it once.”

It’s a bold project, but one NDC believes to be worth the effort.

“It’s unique hyperlocal content – it’s important for me if it’s my nephew, but also for his dad, his neighbor, people from his class and other friends. If you can scale the number of events and make it cost efficient, it’s worth the trouble and nobody else is doing this now.”

He sees a number of cumulative benefits: “From an SEO perspective, if a name gets mentioned and somebody Googles their own name they end up with us. And with good articles we can subscribe them to our newspaper. It’s also a big driver for engagement: we reach out to the really small events. If you’re in sports you want to be mentioned on TV. Every coach in the Netherlands takes it very seriously, everyone wants to be in the paper. So we get really close to a very large group of people.”

There’s also a huge advantage when it comes to publication speed: “The other thing with this is that this robot is very fast. As soon as we have the official result from the football association we can publish within minutes, which you can’t do with human journalists.”

While it’s still an experimental feature, there are also possibilities for using crowdsourcing to have pitchside spectators updating information while the game is in progress so it can be followed by those watching other matches at the same time.

That blend of crowdsourcing and robot journalism is summed up by Ard Boer as “the core of raw data is from United Robots with a bit of spice from crowdsourcing.”

The point of which is to drive free content followers towards the paid content of the site, with journalists’ time freed up to do things that robots can’t such as human interest stories about individual players.

There are future possibilities for data usage and for other robot journalism roles, but Boer acknowledges that the scope of the ambition is already pretty large as it is.

“There are possibilities, but for now we mostly want to say we are going to report on each and every match come September.”

One of the first points that Campbell made was dispelling some of the myths about robot journalism.

Secondly, robots can’t be trusted. Robots make fewer mistakes than humans. The use of structured data means if a fact is there then it will be in the story, if not, then it won’t be.

Thirdly, robot journalism is technically difficult. Well it is if you’re going to build your own robot. But we build and train them for you.”

About the author: Steve Shipside is a freelance journalist who has covered the news media and tech industries for most of his career.