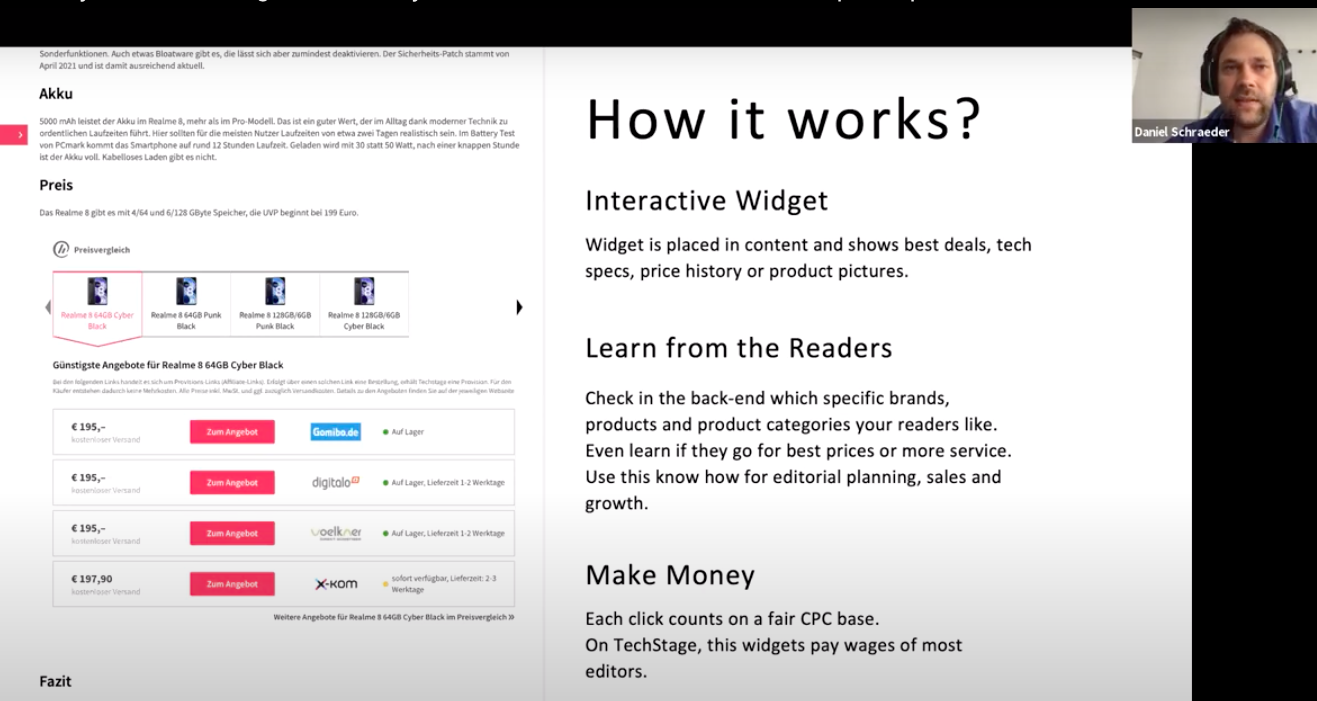 Heise Online is a news website with a focus on the IT and Telcoms industry.

“We checked how much we needed to grow traffic to break even and it was a factor of 12. That was impossible,” he told participants of WAN-IFRA’s Virtual Newsroom Summit conference last week. “So we had to think about what we could do. We were playing around for years with different business models. We were doing premium content, selling videos, but it wasn’t really helping us out of the hole.”

Help came from an unexpected quarter as another of the company’s media assets was also looking around for a new approach.

‘It was clear we needed to be faster’

Examining developments in Google’s own analytic criteria and the resulting advertising budget, Heise could see the falling revenue. Schraeder and his team talked to their SEO experts about what they could do to rescue revenue and they said “do content.”

The logic was inescapable given that they had one site with no content and another “with content but no working business model. So the idea was to combine the two to tell the readers which product is the best for you, and where you can get it at the best price.”

The new approach was tried out in early 2017 and worked well, but it also highlighted a new problem.

“We were optimising the workflows using our own tools, but it was slow and inflexible. Looking at competitors, it was clear we needed to be faster.”

There were also issues about collecting data about what readers liked most, not only in terms of content but also which products were of most interest to them.

The answer was a widget-based CMS system from Ring Publishing. Schraeder went on to showcase how the widget system enabled views of tech specs for all of the products, galleries, and pricing.

It includes an interactive price history diagram that even makes it possible to tell readers when is the best time of year to buy something.

The beauty of the widget approach is that none of his staff have to waste time with Excel spreadsheets and the ever multiplying possibilities of data disparity that come with them.

The configurability of the widget approach appealed to more than editorial staff and readers. The configurability also meant the ability to experiment with formats. “If you can tell how much money you will earn when you make a change then you can prioritise,” he said.

Ioana Blaut, Director Business Development and Sales, Ring Publishing, Ringier Axel Springer Media, Germany explained that the migration to the Ring system had to be handled entirely remotely due to the COVID lockdown – meaning, she added, that the teams have yet to share a beer to celebrate in person.

Schraeder’s was especially pleased by the degree of autonomy the approach gave them as publishers.

“Many things that had to be done by developers in the past can be done by project management or editorial now. We wanted to be more flexible and faster,” he said.

“For example,” he continued, “we had an issue at one point that we hadn’t expected to be such a big issue and just one hour of developing and discussing gave us the possibility to remove the issue by product management so there was no further development necessary. That was one of the best things the Ring Publishing system offers. You can work on the appearance of the site, the menus, the content structure, or new advertorial microsites without hassle.”

Schraeder then used a demo to take the audience through the possibilities of variant creation for testing with the huge range of alternative content layouts on offer.

Because the new modularity enables them to see details such as whether desktop or mobile readers were responsible for more sales, the CMS tool allows simple selection of not only what elements appear and in what order but also what device they will be shown on.

In summary, Schraeder noted these key lessons they’ve learned from the experience: