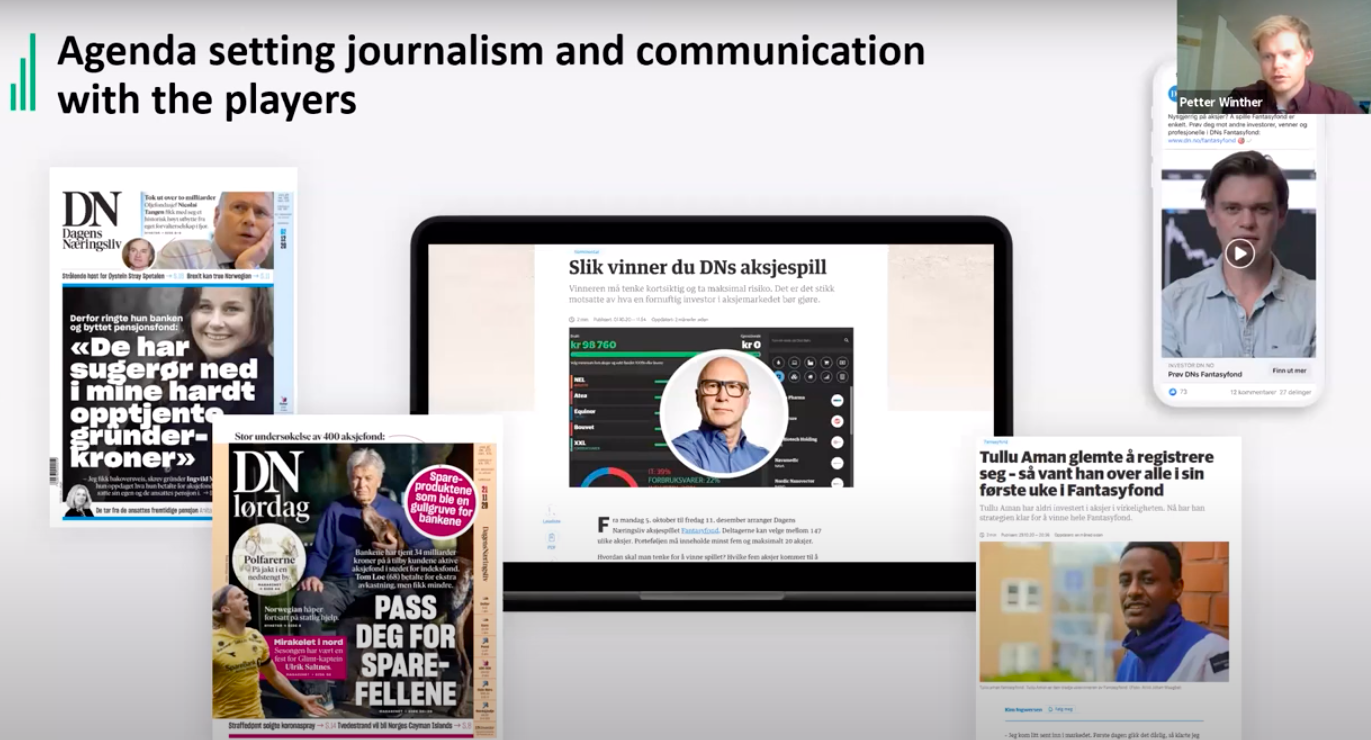 More than 20 percent of the investors on the Oslo Stock Exchange have joined since 2019, Winther said, and these new investors are eager to gain more knowledge about stocks and trading.

“As Norway’s oldest and most respected business operation, DN’s coverage of markets is very credible,” he said, but added that they were struggling in their efforts to reach younger readers.

While you might be tempted to think that maybe millennials just aren’t that interested in investing, Winther said their interviews with young people told them otherwise.

The question, then, became how could DN teach them about savings and investments in an entertaining and engaging way?

“Our answer was by stealing the gaming industry’s toolkit,” he said.

Working together with Norkon Computing Systems, one of their longtime software providers, DN developed a gaming universe on DN’s platform where registered users would pick at least five stocks off the Oslo Stock Exchange.

Fantasyfond (Fantasy Fund) was one of the first cross company, multi-functional, team-based projects coming out of DN’s matrix organisational model, which was implemented in late 2019, Winther said.

A team consisting of journalists, other editorial staff, user revenue specialists, ad sales pros, software designers and developers decided on key performance indicators (KPIs), and target goals for the game. The team was also in charge of planning, executing and evaluating the project.

Stock market games are not new, of course, Winther noted. The unique selling point for Fantasyfond was the user-friendly design and ease of playing. Developers also used rankings and other features known from gaming to improve engagement.

Playing Fantasy Fund is free, but registration is required. Getting new registered users is of great value to DN as user data is vital to increasing the leads funnel and boosting digital revenue through providing better digital advertising segments, Winther said.

“The goal was to get you playing in 2 minutes or less whether you know anything at all about stocks,” he said.

Users created their own fund by picking stocks for 1 million fantasy Norwegian krones (or NOK. Ten NOK is approximately 1 euro) and naming their fund.

They had to pick at least five different stock listings on the Oslo Stock Exchange.

Players could easily change their stake in each stock. They could also sell off some stocks to invest in new companies.

Players competed against each other, and each week, the fund that had the highest return was named the winner of the week, Winther said. After 10 weeks, an overall winner was then crowned champion.

Before the launch, Winther said their goal was to recruit 10,000 players for Fantasyfond.

They got that many in the first 10 days.

DN set several new records for signing on registered users during this period, he added.

While many of the Fantasyfond players were already registered DN users or subscribers, Winther said more than 10,000 new DN accounts were registered in just six weeks.

Since young readers were the main target audience, the goal was to have 45 percent of the users under 35 years old. Winther said that before launch, that particular target appeared to be especially challenging.

However, after the 10 week period, a whopping 55 percent of the players were from that demographic.

More than 20 percent of the players were 25 or younger, and “the youngest playing group was the most active,” he said.

Because this project was a pilot, Winther said the marketing budget was relatively low. Furthermore, all marketing materials were made in-house and distributed through DN’s own channels as well as social media, he said.

Winther also stressed the valuable role DN’s newsroom played in the project. They committed to producing stories about saving and investing throughout the game’s duration, he said.

In addition, a young finance reporter was hired to provide coverage of events and developments within the game as well as a pop-up newsletter for the gamers. It ended up becoming DN’s second most popular email newsletter.

While the main goal was to engage younger users, Winther said that DN also set other goals for new and registered users, user engagement, subscriptions and advertising revenues.

Another goal was that 30 percent of the players should be women, Winther said. While they didn’t quite reach that goal in the first edition of Fantasyfond, they did manage nearly 25 percent. However, he added that they have recently completed a second edition of the game and this time, they succeeded in attracting 30 percent women.

Yet another objective was “to move the brand association of DN from printed paper to mobile news provider,” he said.

While he noted that it’s very difficult to say if they achieved this, he did add “we generated a substantial amount of advertising revenues as a direct result of the game. Several clients who previously only advertised in our print edition took the leap into digital channels to capitalise on the buzz created by Fantasyfond.”

“The feedback we received from our advertising clients and the success with engaging younger users indicate that we managed to alter our brand perception more towards digital and innovative solutions,” he continued. “Moving the brand association takes time, and our work here is definitely not done.”