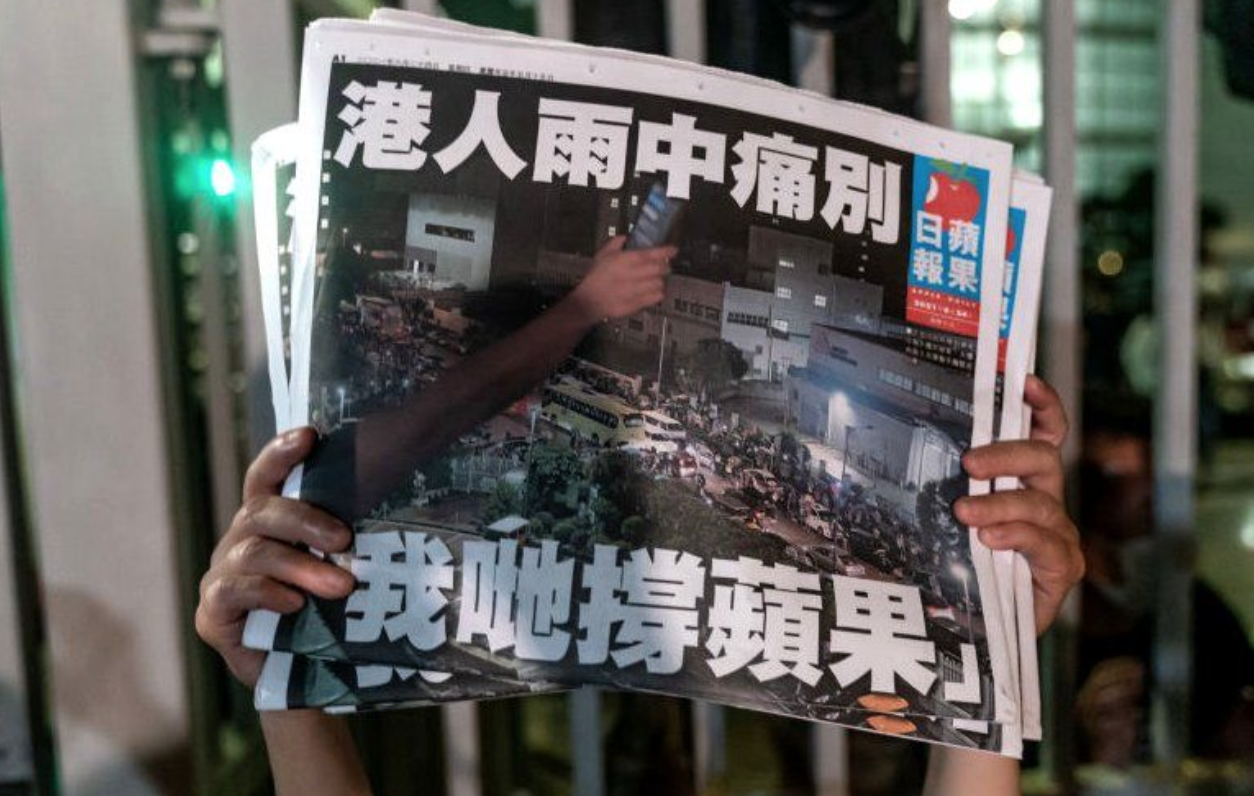 The culmination of a targeted campaign against the news organisation – that has seen the jailing of its owner, Jimmy Lai, the arrest of senior executives and editorial staff, newsroom raids, and a freeze of assets – brought the shutdown of the publication’s website, apps and social media accounts at midnight on Wednesday. The final edition of the newspaper hit newsstands on Thursday.

A daily print run of 80,000 was increased to a million copies in a final farewell to Hong Kong residents from a newspaper that has been a consistent critic of the Hong Kong and Chinese authorities for 26 years.

Following a second police raid on the newsroom in under a year, the coordinated arrests of editor-in-chief, Ryan Law, and four senior executives under the controversial national security law, and the subsequent freezing of the company’s assets on 17 June, the company announced this week that it would be forced to take the extreme measure of ceasing operations due to the increasingly untenable situation.

In a further escalation of the crackdown, Apple Daily confirmed on Wednesday that its lead opinion writer, who published under the name ‘Li Ping’, had been arrested on suspicion of “conspiring to collude with foreign countries or foreign forces to endanger national security.” It is the first known arrest of a writer in connection to the police operation.

The closure announcement was expected to take effect at the weekend, but the continued financial pressures on the publication as well as ongoing threats to the safety of its journalists and staff meant the decision was brought forward.

“The enforced closure of Apple Daily signals the intent of the Hong Kong authorities to stifle criticism at all costs,” said WAN-IFRA CEO, Vincent Peyrègne. “Targeting journalism under the pretext of national security means the future for media freedom in Hong Kong looks increasingly bleak.”

The pro-democracy tabloid has been a consistent target of recent efforts to clampdown on a free press since the implementation, in June 2020, of a deeply unpopular national security law. Despite assurances that the law would not be applied retroactively, recent arrests of Apple Daily staff cited vague references to articles dating from 2019 that allegedly violated the law’s provisions.

The move against Apple Daily follows a steady decline in press freedom in recent years. The increasing difficulty of navigating a growing number of vaguely defined redlines has sent a chilling effect through local media, while a number of international news organisations are considering relocating outside of the territory.

Hong Kong authorities deny their actions are undermining press freedom. The head of the police national security department, the secretary of security, and the chief executive, Carrie Lam, have insisted that the alleged crimes of Apple Daily’s senior staff have nothing to do with “normal journalism.”

In a further sign of the intent to control public discourse, Lam confirmed in May that her government is working on fake news legislation to tackle “misinformation, hatred and lies.”

“Given the wide interpretation and targeted use of current national security laws, this would likely signal yet another powerful tool in the legal arsenal of a government determined to clampdown on opposition voices and, despite their claims, press freedom in the territory,” said Peyrègne.