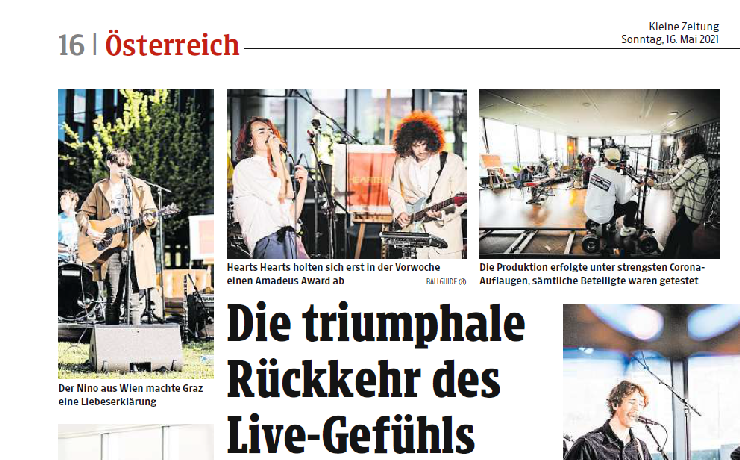 On the 15th of May, thousands of people tuned into Kleine Zeitung’s free online music festival. Held at the Styria Media Center in Graz, the six-hour event featured six local bands, and ensured the “triumphant return of a live music atmosphere,” according to a statement by the editorial team.

The company sensed the anticipation for such an event and launched a concerted promotional campaign, including raffles, applications for new bands to join in, and more.

WAN-IFRA caught up with Dr. Andrea Rachbauer, Head of Marketing at Kleine Zeitung, to learn more about the project and its results.

WAN-IFRA: Why did Kleine Zeitung decide to enter the music business, so to speak – had there been similar ideas or projects before and was it the first Online Festival of this kind?

Andrea Rachbauer: We didn’t really get into the music business, we had a different focus. On the one hand, we wanted to deliver exciting content for a young urban target group to which we otherwise have little or no access. On the other hand, we wanted to support the cultural industry, which had been badly affected by the coronavirus. And we wanted to create a new video format that had not yet existed at Kleine Zeitung and thereby achieve conversions.

What goals and expectations did you have for the event? Did you meet them?


In general, we set ourselves the following goals:

The goals were all achieved or, for the most part, exceeded.

The article about the concert on the Kleine Zeitung website generated the most registrations since we introduced paid content. In 2016, the Kleine Zeitung was the first daily newspaper in Austria to introduce paid content. We have free articles and plus articles (Freemium model) that can only be read by taking out a digital subscription. At this point, we are the medium with the most digital subscribers in Austria, with around 55,000 digital subscribers. The goal is to increase the number to 100,000 by 2023.

The watch rate of 31% is among the top three of all livestreams and videos of Kleine Zeitung.

What was the response to the event from the viewer/listener side and from the participating bands?

The feedback was extremely positive. During the concerts, there were many interactions on our forums and social platforms. Likewise, our band call, which allowed a newcomer band to perform with the well-known bands, was very successful. 58 bands applied for it. We’ve also had many inquiries as to whether we will repeat the event. We are currently exploring how we can adapt the format to “non-corona times” so that it can also contribute to the company’s goals there.

Can these insights also be applied to other areas of the company?

For the advertising market, it was very enlightening to see how events can generate additional revenue even with a narrow target group; for the editorial team, it showed that conversions can also be achieved with “soft topics,” and for the reader market, that target-group-specific content can also introduce young readers to the product.

What did you personally like best about the online festival?

The interdisciplinary and cross-departmental work that we push very hard at Kleine Zeitung. All areas contributed and the project paid off for all company goals. On the day of the concert, it was the atmosphere on site. With what joy and enthusiasm the bands performed and how much we all missed this live atmosphere.