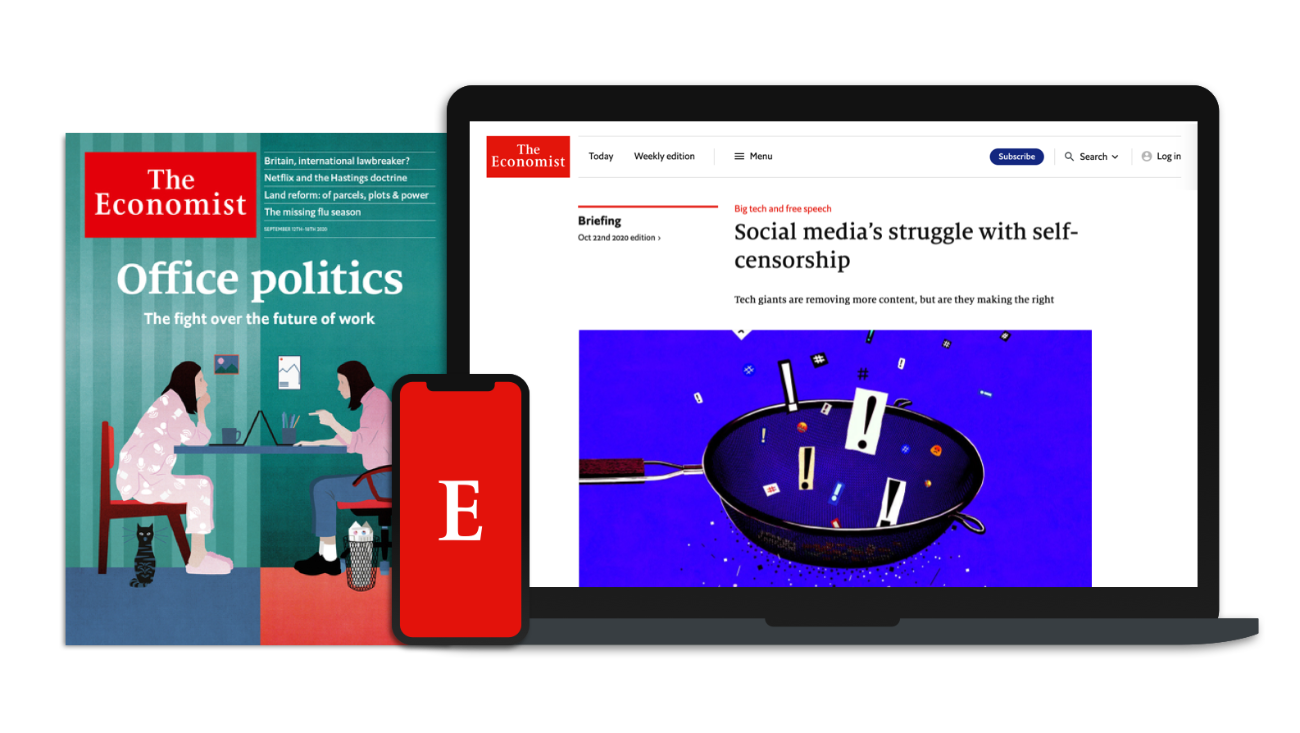 When Claire Overstall joined The Economist in 2019, the publisher’s reader revenue strategy was mostly based on growing by acquisition, which meant going after new audiences and enticing them to take up a cheap offer.

“But after a while, acquisition becomes expensive,” she told the participants of the WAN-IFRA event Forum Francophone: Abonnements numériques (Digital subscriptions). “If you’re not retaining people, the net growth isn’t there.”

Overstall, who is The Economist’s SVP and Global Head of Customer, said that consequently the publisher switched its focus from acquisition to retention, and built a retention strategy based on four pillars that rely on strong data gathering and analysis (see the image below). 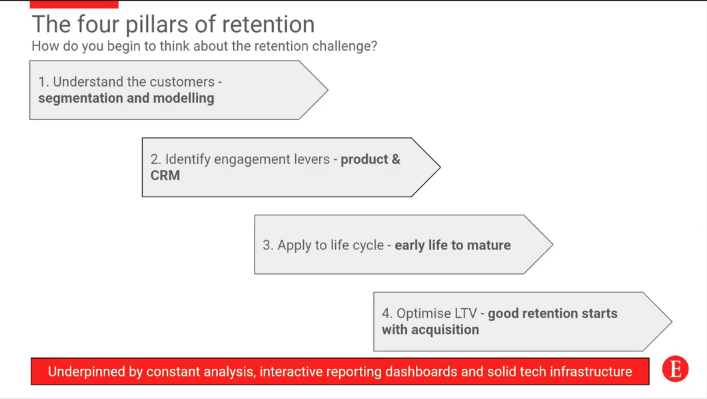 Having set its sights on improving retention, the publisher set up a cross-functional team for the purpose comprising people from product, marketing, editorial and strategy teams. “We had to move away from thinking that retention is just a marketing problem. It’s everybody’s problem,” Overstall said.

The team chose two specific areas to focus on: first, the big drop in subscribers that was occurring after the first 13 weeks of subscription: “This initial experience wasn’t working. We weren’t creating the habit, we weren’t creating ourselves as a necessity.” And second, the in-life experience during years one and two when a lot of annual subscribers dropped off. 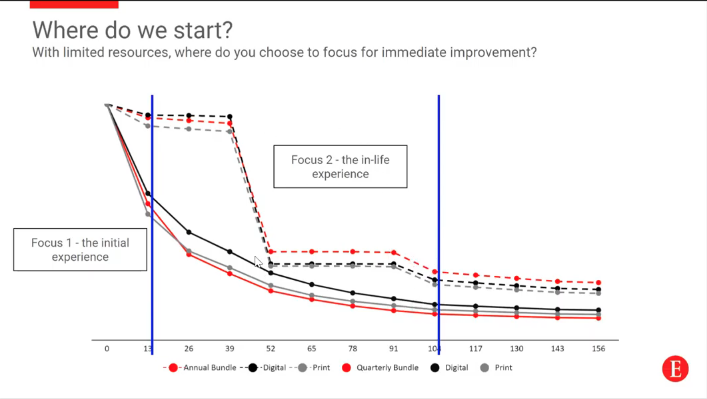 The first change the team implemented was a transformation of the magazine’s trial offer. “The Economist used to be fairly famous for our 12/12 intro offer, which was 12 weeks for 12 pounds,” Overstall said. “We decided that while that was a good acquisition tool, it was harmful to retention. The dropoff on the week 13 was too high, and not worth the volume you got at the beginning.”

Now, the revised introductory offer gives new subscribers a 50% reduction during the first 12 weeks. The new offer was launched in July last year, and already a couple of months later it was making a difference, Overstall said.

“We essentially said to all our subscribers, digital is an intrinsic part of how you can experience The Economist, and certainly in a world where it’s difficult to get newspapers into every country, we think it’s important you have digital access. So we stopped selling print only, and we gave all our print subscribers digital access.”

A big factor behind this decision was the drive to collect more data on audience behaviour. “It can be quite frustrating to talk about engagement in a world where your consumers are reading print only, because you have no idea what they’re doing. The only big way of solving that is to get some kind of digital data on your customers.”

Although these changes already improved the retention rate, Overstall said that the biggest success story around retention so far concerns the cancel/save rate, which tracks the number of people who are persuaded to continue their subscription after they have asked to cancel it. A lot of this came down to giving customer service agents more options.

“We said they can discount people up to half of their subscription cost if it saved them. It’s a blunt instrument, but one that would really help with keeping the volume,” she said. This was combined with continuous training, as well as strengthened incentives: “We tripled agent bonuses if they saved customers. The combination of them having more tools and being more incentivised to use them was really effective.”

The retention team also identified a problem with “non-live cancellation requests” – basically, emails. “As soon as a cancellation request comes in via email, it’s a dead end. You’ve no way of talking to that customer and persuading them to stay with you.” 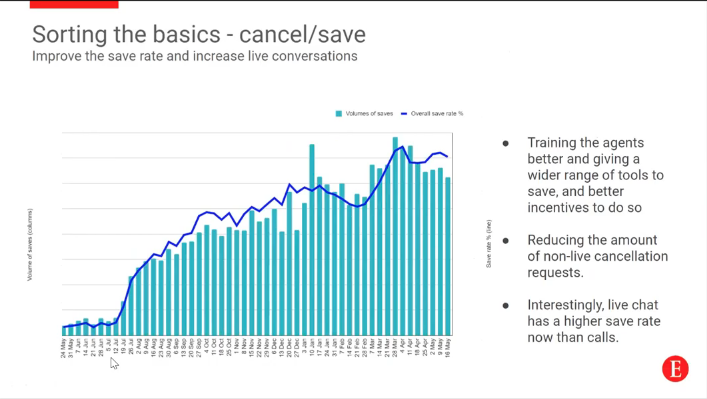 Now, customers connect with a call centre agent, either on the phone or on live chat, to stop their subscription. “We believe in having a conversation with the customer and understanding what they are not enjoying, or whether it is a price problem, and seeing how we could address those problems,” Overstall said.

One of the changes that the retention team initiated was less successful, however. Last December, The Economist introduced an option for online cancellation, which allowed customers to cancel their subscription on their My account page.

As a result, the “volume of cancellation requests really shot up, but without a live conversation way of saving those people,” Overstall said. Online cancellation was eventually turned off, and the team is considering new ways of implementing the feature. “We know it is the right thing for the customer, so we now need to test our way back into turning it on.”

“And ultimately, when we turn it back on, we need to hold our nerve and understand whether those people who quit via online cancellation have more of a propensity to resubscribe, because they feel better about the experience you’ve given them to leave, and therefore it’s easier for them to resubscribe.”

Like many publishers, The Economist saw a significant subscriber bump around Covid, and the publisher wanted to make sure it is engaging its new readers. This led to the launch of subscriber-only webinars, of which The Economist has now organised over 20. The experience has been positive, and according to Overstall the data suggest that subscribers who participate in an event are more likely to convert from a trial to a full-paid subscription.

The publisher also expanded its newsletter portfolio and launched the first-ever subscriber-only newsletter, Cover Story, which highlights the magazine’s covers, details their creation and highlights covers from different regions. This newsletter has now about 100k subscribers.

A renewed focus on engagement

These new products are perhaps just a taste of things to come, as Overstall said that the publisher is now deeply focused on improving engagement. Having successfully used a cross-functional working group to tackle retention, another cross-functional team is now working on engagement. 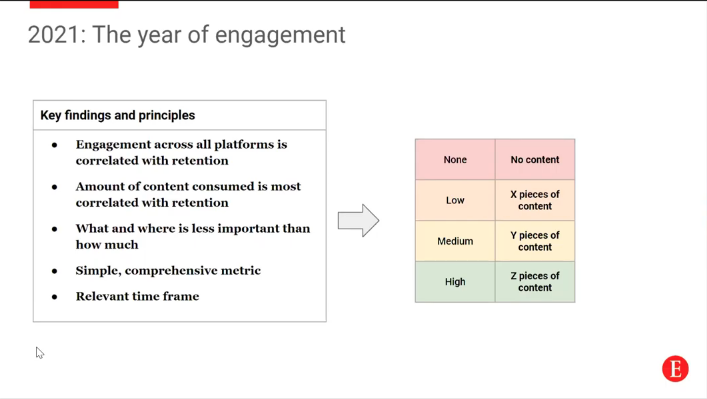 Part of this involves analysing and categorising different levels of subscriber engagement and seeing how the retention rate varies depending on which category a reader falls into. This subscriber engagement metric will then be mapped on the registered users, which will allow for a better understanding of how engagement levels can help in identifying users’ propensity to subscribe or renew their subscription, Overstall said.

“So 2021 is our year of engagement, to begin to really focus on the heart of hearts of retention, now that we’ve achieved quite a lot with the factors around the edges.”

Read more about The Economist’s digital product strategy from our interview with Iain Noakes, Chief Customer Journey Officer at The Economist.

(Main image from The Economist)