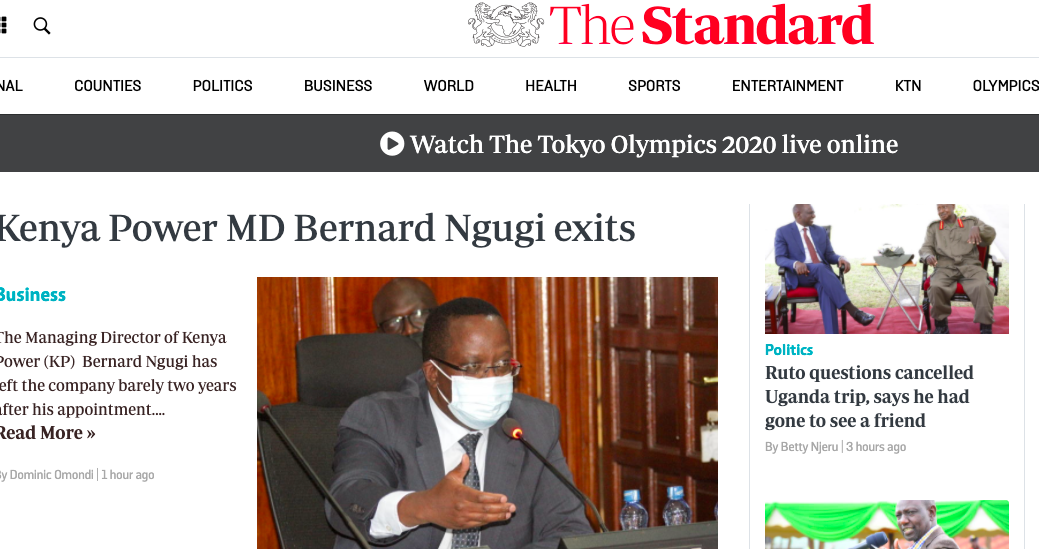 Standard Group is a 119-year-old legacy media house based in Kenya that publishes two newspapers, including its flagship daily, The Standard, and three websites. The group also operates four television stations and three radio stations.

When the first case of COVID-19 was announced in Kenya, everything came to a standstill. The government asked people to work from home and strict health protocols were put in place – including a curfew from 7 pm to 4 am.

A few weeks after the lockdown, the Standard Group started rolling out its plan. They noted a huge increase in traffic to their website www.standardmedia.co.ke. People were consuming more content online – videos, articles and audio. And Standard Group began working out how to make those rises in traffic and consumption boost revenues as well.

“The online on boarding process has to be seamless and painless. We had to remove as many barriers as possible so that when it came time to ask audiences for money, it wouldn’t be so difficult,” says Carole Kimutai, Standard Group’s Digital Editor.

Kimutai was one of the presenters of a roundtable on paid content during WAN-IFRA’s recent Digital Media Africa event, where speakers discussed their challenges and learnings in the deployment of their digital subscription strategies.

She noted that before 2018, Standard Group had made various attempts at convergence and converting the operations into a digital first newsroom with mixed levels of success.

Moving ahead to 2019, the group found itself in a financial tight spot when the government of Kenya, its largest advertising client, cut their budget significantly.

Furthermore, it was decided that all the government’s advertising would be run through an agency it created.

What that meant to news publishers, she said, was that “the government was putting all the adverts in their own pull-out and then speaking to newspapers and asking them to run the pull-outs as inserts. Then they paid at the price they wanted to pay. That, of course, affected revenues significantly.”

A further blow to Standard Group’s bottom line came soon after when there was a ban on advertising from betting companies, which had been big spenders, Kimutai said.

Moving away from a dependence on advertising

Standard Group’s management decided it was time to make a strategic decision and launched a business transformation project. This would not only make the newsroom digital first but also move them away from the traditional advertising model, on which they had been so heavily reliant, she added.

Kenya registered its first case on 13 March 2020, which was quickly followed by a lockdown and people working from home.

“We even had people stop buying physical copies of the newspaper because they thought the newspaper would spread COVID-19, so our circulation numbers were greatly affected,” Kimutai said. “Brands cut their budgets significantly. At that time we just decided that we were going to fast track this project. We called it Project Eagle.”

“In the months that followed, she continued, “we were very aggressive in using data to understand and categorise our audiences. We knew the people who just came in and left. How many people would come in, and how many times they would log-in. What they would do on the website. That was quite helpful for us. Then we also started publishing premium content.”

Getting users to register

They created a category called Insider to grow their loyal readers, those who were coming to the website up to four times a day or more than 10 times in two days.

“We knew those were the clients that we wanted to target,” Kimutai said.

Around April this year, they began asking readers who wanted to access their premium content to register.

Log-ins were introduced and readers were asked to provide their name, phone number and email address.

They followed that up with a soft paywall, using the freemium model.

“Once you registered with us, we asked you to pay after reading 15 articles,” she said, adding that they then introduced payment plans.

However, they soon found that 15 free articles was too many to get enough people registering, so they reduced the number to 10.

“We have learned that Kenyans have peculiar reading habits,” Kimutai said. “Some people in certain months prefer to pay daily, some people prefer monthly, others yearly. So that data is what we have used to create value for the various members who have joined our subscription plans.”

In April 2021, they redesigned The Standard’s website and the print newspaper, to give it a cleaner look, and one in keeping with what they had learned from their audiences by doing online studies.

A different model for The Nairobian

Then, late 2020, they decided to use a different model with their weekly publication called The Nairobian – a weekly tabloid. There, they put up a hard paywall.

Kimutai said having two types of paywalls gave them a better understanding of how different audiences behaved with different kinds of content.

“We relied on a lot of data, and we do actually spend a lot of time on understanding data, user habits and price sensitivities,” she said.

She also stressed they are constantly looking at ways to increase value offerings apart from content, such as crosswords and podcasts, and having those available across platforms.

Prices for digital access to The Nairobian are 10 Kenyan shillings per day, 40 shillings a month (about 31 euro cents), 240 shillings for half a year (about 1.86 euros), or 480 shillings (roughly 3.72 euros) for an annual subscription.

Kimutai said COVID-19 was a silver lining for them because the management made a strategic decision to fast track the reader revenue plan. It also helped them to step back and reflect.

In terms of lessons learned, she pointed to four specific accomplishments:

1) All editors and journalists at Standard Group now understand that the advertising media model is not sustainable. “This is one of the biggest lessons from the pandemic, that we can’t rely on advertising fully,” she said.

2) The newsroom is now generating content for various types of audiences, such as those who come only for breaking news, or who want different kinds of content.

In addition to traditional coverage areas such as health and economy, Standard Group also provides readers with features such as CheckPoint, which Kimutai said “is in line with the fight against fake news, misinformation and disinformation. A lot of this we also convert into graphics to simplify content and also appeal to the younger audience. We found out this really works.”

3) The company is also applying the lean start-up model, and its Build-Measure-Learn loop. “It’s a cycle, and anytime we build something new or change something, we take a look at UI and UX feedback,” she said. “Maybe something is not working for the iOS version or the Android, fonts, colours. We have to keep measuring again and again, using a lot of data to learn and to ensure continuous learning.”

4) Lastly, Standard Group has come to the conclusion that for them, social media is a marketing tool, not a monetisation platform. The various platforms can be effective for marketing, brand building and brand awareness, but Kimutai said they do not see them as significant sources of revenue. For that, they focus on their own platforms, “because we know our audience, and we want to give them value for their money,” she said.

They also believe in having constant communication with their subscribers. “How we communicate: We have newsletters. We use social media to communicate with our subscribers and our would-be subscribers,” she said. “Over time, we’ve had half a million registrations, and we have about 10,000 active users, so a conversion rate of about 3 percent, which is a global average.”

Kimutai also highlighted ongoing issues that they continue to face.

Copyright challenges: where other publishers take their premium content and republish it. “What do we do with these people who don’t have respect for content that publishers are using?” she asked.

Newsletters: Standard Group is using Artificial Intelligence to ensure the right user is getting a newsletter that suits them and showing the content they want to read. “Remember there’s a lot of content going around, so we need to ensure that whatever goes into their email is not spam but something that is user friendly,” she said. “And hence the role of a Product Manager, very important, because we’re talking about customer relationships.”

More investment to generate premium content: “Premium content is not cheap. It needs lots of resources … Some content needs a lot of time, a lot of manpower. So those are some things that media houses like ourselves need to plan for and are grappling with,” Kimutai said.

Persuading people to pay: Kenya is known for Mpesa, a form of mobile money that is highly popular. “We don’t have a lot of people who have credit cards, and that is something we have learned as well: people want to pay on mobile.”

However, she added that Standard Group’s real challenge is to persuade people to spend more than they would normally since they are also used to paying only small amounts for newspapers every day, or paying for them at the end of the week.

“We now have to change the culture for them to pay for annual subscriptions,” Kimutai said.

This post was updated on 11 August to include the digital subscription prices for The Standard and The Nairobian.