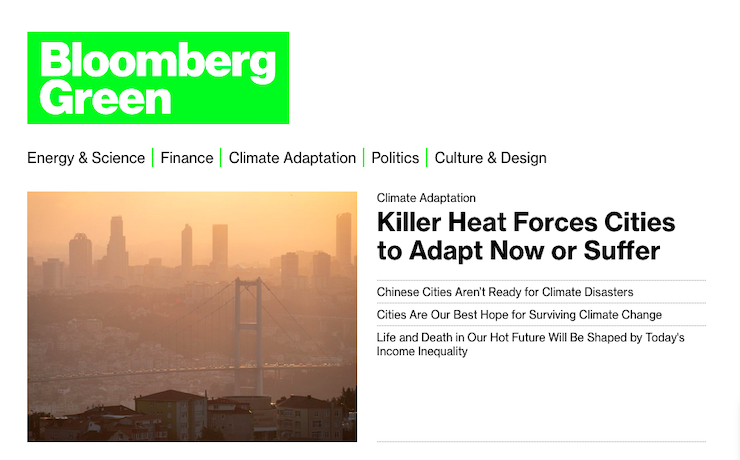 On World News Day, 28 September, some 300 newsrooms around the world will show what they are doing about climate change.

As part of the build-up, Laura Oliver interviewed Aaron Rutkoff, editor of Bloomberg Green, the multiplatform editorial brand launched by Bloomberg in January 2020.

“We’re one of the only – maybe the only – magazines to ever be created from scratch in the middle of a global pandemic,” says Rutkoff.

The pandemic has helped teach the team how to tell stories about global systemic risk and the ways societies are vulnerable to them. For the media company, however, climate change had already become “too big to be contained by one narrow beat” in the newsroom; it had “intruded” into almost every area covered by Bloomberg and a new mode of coverage to match the scale of the story was needed.

“Bloomberg is the chronicle of capitalism and global warming is a consequence of capitalism, so of course the newsroom had already been covering climate and the energy transition,” says Rutkoff.

“But our coverage was spread around across teams covering energy, politics, finance, consumer products. There wasn’t a way for readers to easily see the scope of our climate coverage or to have those stories bound together in a way that spoke to the growing audience explicitly seeking new ways to understand climate change.”

There was also an enormous opening, particular for an outlet like Bloomberg, says Rutkoff. Climate change is a story about extraordinary risks and dangers and how we face those, but “is also one of the biggest business stories ever” and essential for investors.

“Our editor in chief John Micklethwait had this insight that we’d entered the “climate era” and so part of the job he set out for us was to create a publication within Bloomberg for this new era,” he says.

Bloomberg Green offers news, analysis and solutions across digital, print, TV, audio, social media, email newsletters and live events. Its Data Dash product, a scorecard of live data on tree loss, air pollution, carbon-free energy and more, was the first thing conceived as part of the new brand. It gives readers environmental data in a highly visual and easy-to-understand format and is embedded in every Bloomberg Green article and on the title’s homepage, akin to stock tickers and indices on Bloomberg.com.

“Data is the DNA of Bloomberg – if you’re reading a story about a company, the stock ticker for the company is right there in front of you. We wanted that same visceral real-time data to become part of reading about climate change,” says Rutkoff.

“With Data Dash, the current level of carbon dioxide in the atmosphere is in your face while you’re reading about climate change.”

Bloomberg Green’s biannual magazine features a selection of the team’s long-form articles, opinion pieces and data projects, alongside photography, and the Data Dash is used as an important design element of the print product. The same atmospheric CO2 number featured in the online Data Dash is printed on the spine to date an issue, each of which begins with a story led by Bloomberg Green’s original set of climate metrics, from the race against heat to the end of the oil era.

In addition to the dashboard and foregrounding of climate data, Bloomberg Green has found success in engaging audiences through its daily newsletter and social channels too. More than half of readers come to Bloomberg Green articles from social platforms (non-subscribers can access up to three free articles). Social audiences are particularly engaged on Twitter, where it has the striking handle @climate, Facebook and Instagram – a sign for Rutkoff that new audiences are being reached.

Its email product is hosted by a different journalist from the team each time, as a way for readers to get to know the core team of climate and ESG reporters, and focuses on topics including climate impact, zero-emission technology, sustainable investing and the energy transition. Newsletter subscribers doubled in the first year since launch and, since the beginning of 2021, its subscriber list has grown by another 50%.

A weekly TV show and an award-winning investigative podcast, Blood River, have been added since launch and the team’s journalism has received critical acclaim, including recognition for its investigative series on carbon offsets and plaudits as a positive development in journalism. But, for Rutkoff, it’s the impact of Bloomberg Green’s journalism and the way it engages audiences that matters most.

“I’m focused on our ability to get results with hard-nosed accountability journalism about climate change,” he says, referencing Bloomberg Green’s coverage of Exxon’s plans to increase its greenhouse gas emissions as one example.

“Our investigative series, in many ways, prefigured the shareholder revolt that put climate activists on the board of that oil giant. You can see Exxon in the aftermath of our reporting move to change its approach on those areas.”

With a series of scoops on methane leaks to come, Rutkoff is continuing this push: “Sometimes those stories get results. That kind of impact is the real mark of great journalism.”

The author of this article, Laura Oliver, is a UK-based freelance journalist. Twitter @LauraOliver

WORLD NEWS DAY is a global campaign, organised by the World Editors Forum and Canadian Journalism Foundation, to draw attention to the value of journalism. On 28 September 2021 more than 300 newsrooms will showcase the work they are doing on climate change. Join the campaign.