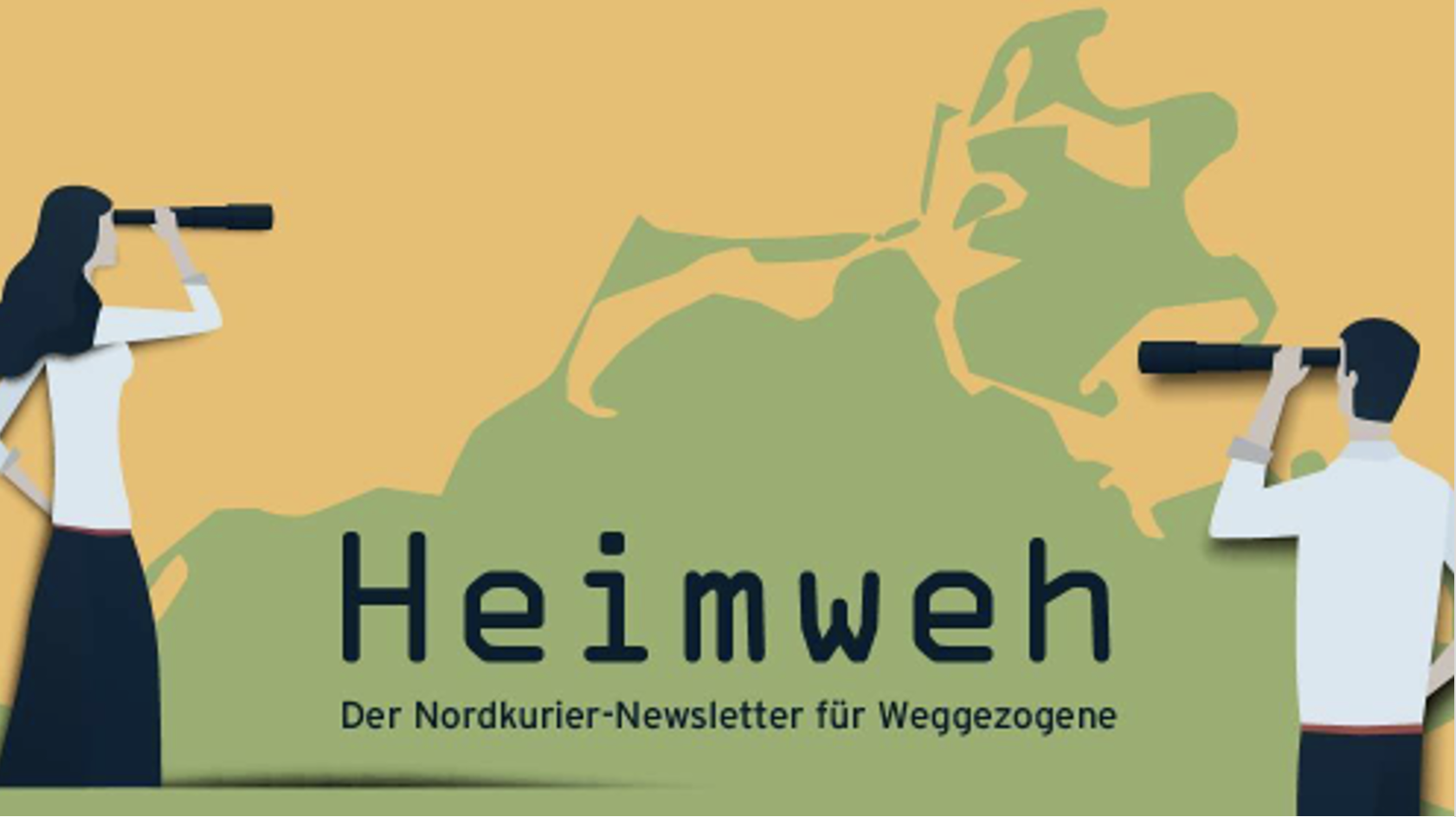 Today, Mecklenburg-Vorpommern is home to about 1.6 million people, which makes it among the least populated of the country’s 16 states. After Germany’s reunification in 1990, the northeast saw a population exodus as people took advantage of new freedoms to relocate in search of other economic opportunities.

However, as is often the case with expats, many of those who moved away have maintained strong ties to the area through their families and friends and frequently return to visit them.

“Many of these people come back three to five times a year,” says Alex Drößler, Nordkurier’s Digital Transformation Manager. He also leads their product development. A lot of the former residents are also regular visitors to Nordkurier’s website, he adds.

Furthermore, since the region is well known for its natural beauty, which includes an extensive coastline along the Baltic sea, three of the country’s 14 national parks, several hundred conservation areas and numerous lakes, it is a popular vacation destination for many Germans, and large numbers of former residents regularly spend their holidays there.

Connecting with the community

Using the Jobs-to-be-Done theory / perspective, Drößler says Nordkurier considered their audience segments and what kinds of products they could develop to reach them.

As part of their overall efforts, Nordkurier is also among the nearly two dozen news publishers that are taking part in the current edition of Table Stakes Europe.

Designed primarily for local and regional news organisations, Table Stakes is a programme to help drive digital revenue growth by re-focusing on audiences. Now in its second year in Europe, it is a collaboration of WAN-IFRA and Table Stakes architect Doug Smith in partnership with the Google News Initiative Digital Growth Program.

After doing an in-house workshop followed by several personal interviews with members of their intended target group, Nordkurier decided to create a newsletter specifically aimed at former residents.

Called Heimweh, which translates as “homesick,” the newsletter was developed late last year and launched in December 2020.

Heimweh provides a mix of local content, such as new developments in the region, tips about what people can do on their next visit there, photo galleries, as well as interactive components.

“We always have an engagement element in the newsletter,” Drößler says. “We ask readers for pictures or old pictures they have from their home city, or we ask them to share their stories: when they moved away, why, how they live now. Sometimes people come back. And then we get a nice story about the motivation of a person coming back from other places to this area.”

Another regular feature is a photo quiz that highlights something in the area in a slightly obscure way so that people have to think about it a bit, which is intended to bring back memories for them.

“People respond to that and share their memories with the place,” Drößler says.

A sense of community

While Heimweh provides relevant news to readers, it’s also meant to foster a sense of community for them.

“For now, the value proposition of this newsletter is to provide an overview of the most relevant news of the past week, to give positive views from the region, to report on the people who came back – who left and moved back. But also to people who still live elsewhere because it’s a community sense, people who are in the same boat as people from here,” Drößler says.

The new newsletter quickly resonated with former residents, and hundreds of people soon signed up.

“There was one person who said ‘I was visiting my mother, and I always get a special feeling when I read this newsletter. It’s like a warm feeling of coming home,’” Drößler says.

Today, Heimweh has around 2,700 subscribers and an open rate of about 50 percent. While the initial number of subscribers in the first months was strong, new subscriber numbers have plateaued recently, and Drößler says they are searching for new ways to get more people to subscribe.

Among the measures they are trying is to put newsletter registration forms beneath Nordkurier articles online that editors believe are likely to be of interest to former residents visiting the website. Drößler says they are also planning to do more promotions through social media, especially Facebook.

Next, he says, they want to test offering people incentives to recommend the newsletter to others. He would like for Heimweh to try some of the kinds of referral marketing the popular Morning Brew media company has done in the United States.

For those not familiar with Morning Brew, they started with a single daily newsletter in 2015 and have mushroomed into a multi-platform brand (newsletters, podcasts, videos and events), which now has more than 3 million subscribers. Much of this huge growth is attributed to their innovative marketing efforts.

Hand-in-hand with the development of the editorial concept of Heimweh, Drößler says, was the question of “how do we make some money with it?”

He says they considered two main possibilities. First, to use the newsletter as a funnel for potential subscribers over the long term, as many other news publishers do with their newsletters.

The other idea was to have Heimweh pay its own way, as a standalone product with its own sources of revenue.

Based on their interviews with former residents, Drößler says they found that relatively few people who were interested in Heimweh were likely to become Nordkurier subscribers.

In general, they learned that most people are only willing to pay for a news subscription in the area where they actually live. So Nordkurier decided to have Heimweh pay its own way, and that is working out quite well for them.

“What we found out is there are some relevant institutions in this area that are very interested in talking to these people,” Drößler says.

“These are companies that are seeking highly qualified people with a university degree, for example,” he continues. “Then there are real estate agencies that want to get their houses sold or rented.”

There is also an important state agency that has an interest in getting former residents to move back to the area.

“We talked to them and they said, ‘This newsletter is a great idea, because we have no tool to reach these people, so we’ll give you some money to do that. Here’s the money, do the newsletter,’ ” he says.

Heimweh also gained some regular advertising clients, such as an area hospital that was looking for skilled workers, Drößler says.

Another advertiser is a relatively new, and large, federal foundation that promotes voluntary work and has also paid to post job ads.

Promoting other offers and paid-for products

In addition, the newsletter has been a conduit for other business opportunities for Nordkurier.

For example, Nordkurier’s parent company also owns a travel agency, and one of Heimweh’s marketing campaigns offered people who signed up for the newsletter vouchers worth 150 euros when they booked an apartment through the agency.

Drößler adds that they have several other paid-for products, such as magazines and special editions, that are of potential interest to Heimweh’s readers.

For instance, in the late 1970s, the region suffered an especially difficult winter, and Nordkurier has produced a magazine about it. The publication was advertised in Heimweh, and numerous newsletter subscribers ordered the magazine.

“We look for related products that we offer that address this homesickness and see if we can sell them,” Drößler says.

In terms of editorial content and production, the team producing the newsletter is quite small, just a few journalists, all of whom have other duties in addition to Heimweh.

The story selection process is assisted by Nordkurier’s regular news editors, who read all of the articles published across editions, and provide an initial selection of stories by tagging ones they think would be good fits for Heimweh with the keyword “expats.”

The main editor for the newsletter considers these options and then looks to ensure that they have every area of their circulation involved, as well as participatory elements and at least one newsletter exclusive. A few pieces of breaking news are also added to the newsletter.

And then the next edition is scheduled and prepared.

On Thursdays, the day that Heimweh is sent out, there’s another conference call, sometimes via chat to go over the newsletter before it is published.

Heimweh was initially published on Monday evenings, but Drößler says they have since changed the publication day to Thursday as a kind of “early weekend starter” for those preparing to come home.

Nordkurier is also creating a second product for tourists that will include a newsletter and a section on Nordkurier’s website aimed at people who vacation there.

They did an internal workshop for this newsletter as well, but this time, rather than having only editorial staff involved as they did the first time, they expanded the teams to make them more interdisciplinary. For example, Drößler says in addition to journalists, they invited people from their tourism department, as well as from marketing and product.

“That was a good decision because everyone brings in a different perspective that we would not have otherwise,” he says.

As that product begins coming together and Heimweh continues its development, Drößler says Nordkurier plans to keep experimenting.

“It’s still learning by doing to produce the best newsletter we can,” he says.