In recent years, the audience funnel has become a common way to illustrate how people go through a series of stages from being aware of a product or service to becoming an advocate for it.

“It’s important to leverage every step of the funnel because while you’re busy attracting new audiences, other folks are constantly leaving,” said Lissa Cupp, Blue Engine Collaborative, Facebook Accelerator, who moderated the session.

The bottom of the funnel should be leveraged by converting those readers into “loyalists and keeping them for life.”

Cupp also emphasised the importance of identifying those users who are about to churn and the need to re-engage them.

Three speakers who have gone through the Facebook Journalism Project‘s Reader Revenue Accelerator shared their experiences and learnings.

Sinchew+ was established in 2019 as a membership programme with three tiers. The regular tier is free and has limited access to benefits and privileges. The second and third tiers, known as VIP and VVIP, are paid memberships with differing benefits.

Applying the funnel approach to their membership programme, different paid and organic campaigns were implemented to drive Awareness through different platforms such as their website and social media profile.

For instance, readers who have received the COVID-19 vaccine were offered a 50 percent discount for their first subscription.

Referring to Experience, the next level in the funnel, Chin said user experience was extremely important in converting non-subscribers. She revealed key learning points from their checkout audit done during the Reader Revenue Accelerator program by Facebook.

These include product presentation and simplification of the checkout process. In addition, regular members could access previews to VIP articles, where blurbs would entice them towards conversion by emphasising benefits of being a VIP member.

Chin also shared that they had a “huge community of business owners and entrepreneurs seeking to network during the pandemic.” They created an online networking event to fulfil this need for their VIP members, while promoting the event to regular members as well. This strategy proved to be effective in moving regular members down the funnel to become paid subscribers.

The site also organised small group sessions with guest columnists, medical experts and fengshui masters, to enhance the experience for VIP members. Ten percent of the content on this site was made accessible to regular members, constantly reminding them to become VIP members.

Several virtual events were targeted at conversion by offering exclusive opportunities to regular members. Chin said the chances of converting them into VIP members were 50 percent higher after they experience benefits of the VIP tier.

In conclusion, Chin said the accelerator program allowed them to strategise their approach towards growing reader revenue by applying the funnel. Despite the growth statistics above, there is still more to be done to increase reader revenue.

CommonWealth is a monthly business magazine that has been around for 40 years. In 2020, the number of digital subscribers surpassed the number of their print subscribers, following the launch of a paywall four years ago.

Firstly, the team put a priority on engagement.

“A lot of us, we often only focus on conversion and we don’t pay as much attention for engagement,” Huang said. “But if you don’t have engagement, you can’t have conversion.”

CommonWealth amplified engagement through their email newsletters, such as amending subscription to their daily newsletter as a default setting for members, and adding an editor’s note to personalise the experience. They also upgraded their email service provider, and changed email distribution metrics.

Lastly, signing up was simplified to a one-click process for all users. Although this channel did not result in a substantial increase in subscribers, these efforts yielded positive results in increasing engagement, which can be seen from the increased number of readers who opened their newsletters.

Secondly, Huang’s team targeted readers at the Preference stage in the funnel through their website, to maximise conversion opportunities. Onsite marketing assets for subscription were increased, including a hello bar, drawer bar, stand-up bottom bar, and pop-up.

They also experimented with their paywall, such as amending paywall copy, paywall allowance, and reset period. Next-article UI was used to increase engagement, and the offer page was simplified to increase conversion rate and drive users to purchase a yearly offer.

To encourage Loyalty, CommonWealth retained converted subscribers by making them feel special. They organised webinars exclusively for subscribers, and sent them gifts and thank-you emails on their anniversary.

For them, the key change was to create a “subscriber-lookalike audience,” to target subscribers instead of readers, and to extend a higher advertising budget of 168 percent to Facebook ads.

With regards to Experience in the funnel, audiences are inundated by plenty of email marketing.

As the first point of contact, “the email subject should look attractive and good” so that readers would open the email. Putra emphasised the importance of finding “ways to make your email marketing subjects shorter and simpler.” 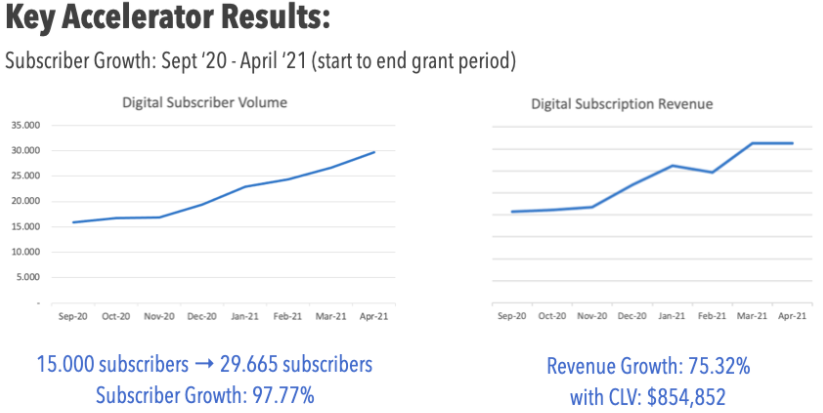 About the writer: Josephine Tay is a Singapore-based editor and producer with a passion for storytelling. Occasionally, she deviates from broadcast to dabble in publishing. She has been a media professional for 20 years.