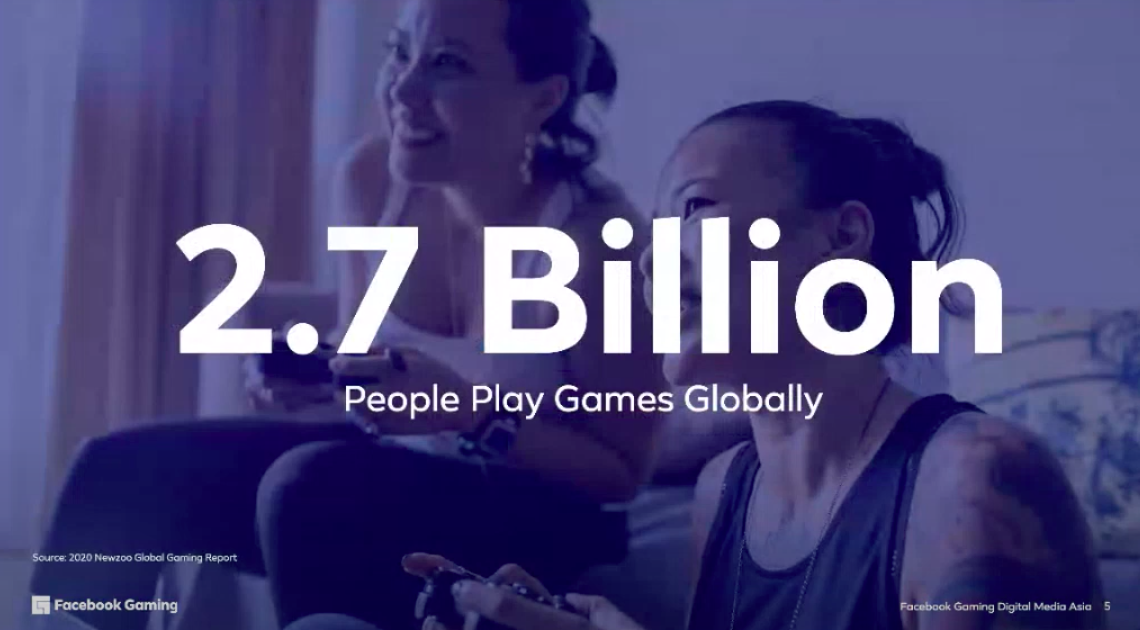 “Out of the 2.7 billion game players worldwide, almost 1.5 billion of them are right here in the APAC region. Unlike decades ago, this is no longer a niche entertainment medium,” said Jay Horathai from Facebook APAC.

The industry is projected to grow 3 percent per year, Horathai said.

Rev Media Group’s Chief Product Officer, Nicholas Sagau Tony Ngimat, said gaming has piqued the interest of board members at his company as an area they could venture into to increase their audience.

“Four years ago, we were looking for an audience that was not on our current traditional platforms. The youngest age group that was watching our content was about 25 years old,” he said.

“So when we look at what people under 25 were interested in, we found that most of them are into gaming,” said Ngimat, who is also the president of Malaysia Digital Association, a representative body for digital publishers and service providers.

Once they realised this, they pursued bringing competitive gaming to a mass audience by introducing new never-seen-before content on mainstream media, where they managed to reach an audience of 17 to 18 years of age, said Ngimat.

Many people play casual games by themselves, said Ngimat, but they would join or watch a game the moment they realise there are competitions.

“That is when media publishers can reach a mass audience,” said Ngimat.

To reach a younger audience, media publishers first need some young talents to set up the team, Ngimat said.

When setting up the team at Rev Media, he said he looked for people who not only played games but also knew which influencers to collaborate with.

Ngimat added it was also crucial for the team to be able to connect with the local gaming communities to provide the right kind of content to the audience.

“Once you have all that, then you can use your other skills as a media publisher to reach your audience.”

Make use of current structures

Ngimat said media companies could use the same monetisation model they used for other content and apply it to gaming content.

“Sponsorship is a huge business in gaming tournaments. You can do brand tie-ups, live streaming, social posting, things that you have already been doing anyway for your other content.

“Don’t look at gaming as something new altogether. Use your current structure and apply it to the gaming content that you have,” he said.

“We’re quite fortunate in Malaysia as we have many esports associations at both state or national level. Also, we have a pretty good government agency that supports the industry.”

Ngimat advised media publishers to immerse themselves with the gaming community to look at areas where they could promote the community’s weekend competitions live on their platform or on Facebook.

He added that many ideas or input could be generated just by chatting with the gaming communities and their favourite game influencers.

‘Collaboration is the key’

Cosplayer and influencer Alodia Gosiengfiao said it is always important for media publishers to approach gaming personalities based on the latter’s genre as the viewers who follow specific creators have already developed some affiliation with the genre.

“This is an easier entry point for followers who have already been a follower to these personalities to consider downloading the game, said Gosiengfiao, who is also a Facebook Gaming Partner.

“It is better to strategise to something more similar,” she said, adding that featuring a creator of games for a different genre would lead to lower rate of game downloads.

It is also vital for media companies to always innovate and not stick to the status quo so that their content would not be forgotten, she said.

“It is also great if partners (media companies) can provide creators to find content together with them. Collaboration is the key,” Gosiengfiao said.

Having worked in the gaming industry for over a decade, Gosiengfiao said large companies are now more open to hearing suggestions from gaming creators like her when executing campaigns.

“There are creators who are skilled in other senses. Some of them are also musicians, cosplayers, actors so they can feature in your short film. It is more impactful if you do something different. It is really helpful for these creators to be amplified by media companies,” she said.

About the author: Zafira Anwar is an award-winning Malaysian-based freelance journalist who loves learning and writing about technological innovations and social development in Southeast Asia.