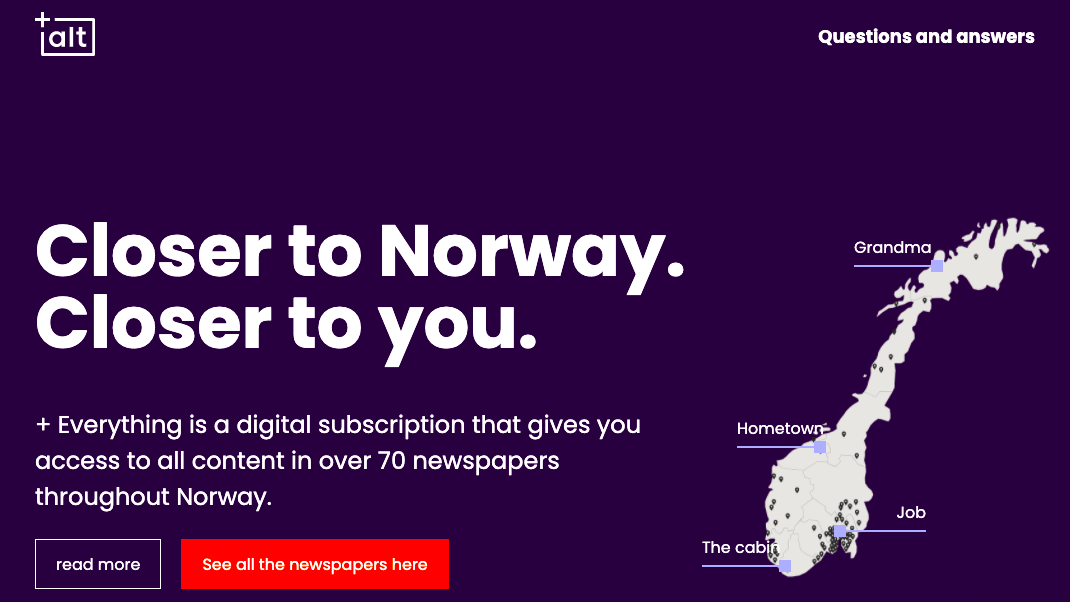 The company launched its new and improved digital multi-subscription offering, +Alt, in May 2020 with the goal of acquiring 50,000 paying users.

Within eight months of the launch, Amedia had surpassed its target and acquired 120,000 paying subscribers, becoming the country’s third largest news subscription company.

The company launched +Alt as an upsell to its existing customer base, encouraging them to pay a premium to gain access. Of the 120,000 subscribers, 86,000 were new users, and 34,000 of them were existing customers who upgraded their subscription plans.

Amedia employs about 1,000 journalists and produces more than 1,000 daily articles with an aim to make journalism accessible to everyone with a “Spotify-for-news” model.

Ole Werring (Chief Product Officer, Amedia Utvikling AS, Norway) joined WAN-IFRA’s recent Digital Media Europe conference to talk about how Amedia’s +Alt makes for a successful “one-subscription, one-login” business model, with the amount of content the company produces daily and how wide-spread its various newspapers are.

Amedia employed +Alt after identifying user needs and matching them with the needs of the company and its employees.

Users’ primary gripe with the existing digital subscription model was dealing with multiple logins across Amedia’s properties and the high cost incurred. The user need was clear – they wanted easy access.

As for Amedia’s concerns, the company was producing a horde of daily news content, the consumption of which was concentrated only to the regions it was produced in. Hence, the company saw a chance to utilise its country-wide distribution power, garner a larger audience, new subscribers and subsequently launch an upsell product to existing customers to increase Average Revenue Per Unit (ARPU).

+Alt happened to be the solution to Amedia’s subscription-related woes, with its seamless navigation and complete access to all its 73 news websites and 146 news applications, streamlining the login process with one user ID across the brand.

Subscribers also have the option to opt in for a family package and share it with upto five members, which translates into more users for the company.

Apart from these perks, the experience also includes a personalised onboarding process for new users to learn more about the product.

To promote the subscription efforts and sales, the company displays teasers, which explain the access to and utility of the product, on the homepage and article pages as an invite for new customers and a reminder for existing ones.

Amedia partakes in digital campaigning with Facebook and its local news websites, and sometimes in physical branding. Whatever the method might be, the company ensures to co-brand with one of its regional news sites to strengthen that particular brand image and offering.

After launching +Alt, Amedia noticed that the predominant friction in using the product has vanished. Users can now pick and choose articles independently across titles and are not bothered by multiple login details or annoying pop-up boxes.

“Users are willing to pay an extra fee for this experience,” Werring said.

As for the company, it finds that its journalism now has a much wider reach.

“We can upsell existing customers and bring in new ones as our product offering is now much richer,” he said.

According to Werring, users have expressed appreciation for the new product and the reasonable price point.

“Our users are no longer bound by geographical restraints. They can follow the news from wherever they are as part of their +Alt subscription,” Werring said.

Amedia also witnessed increased engagement, which continues to spike, faster than the rate at which the brand is garnering new subscribers.

All of the 73 participating newspapers saw a revenue uptick in 2020 because of the new product launch, which strengthened their economic basis for local journalism across Norway.

“Amedia has shown a revenue growth of several million Norwegian Krones every month. When you bundle all newspapers under a new umbrella subscription plan, users will obviously terminate their old, individual subscriptions, but the big picture shows that this move has been fruitful for every participating newspaper, which is a good foundation to build on further,” Werring said.