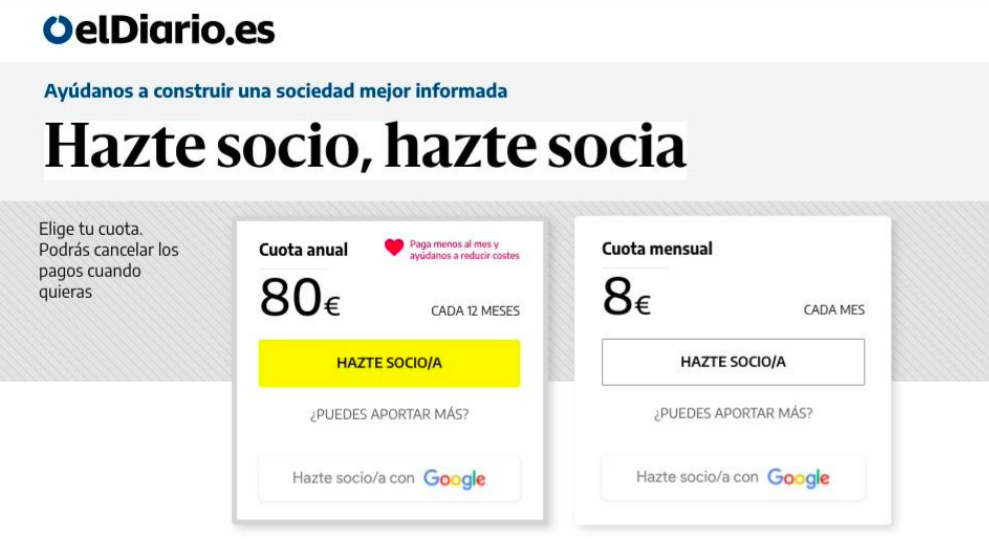 El Diario’s membership model guarantees its employees economic and editorial independence, all the while keeping the reader at its centre and prioritising those who cannot afford to pay.

Today, nine years since its establishment, the El Diario community has more than 61,000 members.

In 2021, El Diario is not only economically independent but also sustainable. The company’s revenue, which comes equally from advertising and membership fees, has witnessed a steady rise since it was launched.

El Diario’s membership plan allows 10 free monthly articles after which readers must register with either of the two plans on offer. The annual plan is priced at € 80 and the monthly one at € 8. Both plans offer a host of advantages such as access to all content, ad-free browsing, newsletters, a community building experience, meetings, and discounts and promotions.

Sixty-eight percent of readers opt in for the annual plan, which proves beneficial for the company from a financial standpoint, but also in formulating retention and loyalty strategies.

In addition, the brand caters to those who cannot afford to pay for membership by offering reduced pricing and zero fee options.

“Our members don’t pay us to read the news; they pay us to support our journalism to build a better and more democratic society,” said Esther Alonso, El Diario’s Marketing and Membership Programme Director, who joined WAN-IFRA’s virtual Digital Media Europe conference on Tuesday.

Mirroring the aforementioned rise in revenues, the brand’s audience has also consistently climbed since 2012.

As of July 2021, El Diario had 11.5 million unique users, which put it in 10th place in the ranking of Spanish legacy and native digital media. According to the Reuters Institute, El Diario is also the most read native digital newspaper in Spain.

When COVID hit in March last year, the company, for the first time in nine years, hiked its membership fee by 33 percent. This move was well received by the audience and 99 percent of the existing members accepted the increase. The company also managed to gather 20,000 new members, taking the total count to 61,000 paying members and 212,000 registered users.

El Diario may have established a loyal reader base, but it still has a ways to go in connecting younger readers with its journalism. The average age of an El Diario reader is 50, and members are mostly between 55 and 60 years old.

Over and above the two membership plans on offer, readers can also choose to be “Ambassadors” and pay a higher amount as an extended show of support.

Eleven percent of the members at El Diario are currently ambassadors. Of that 11 percent, 14 percent pay an added amount to support a local edition of their choice in a bid to boost hyperlocal and regional expansion.

“We are proud of being transparent with our readers and share an emotional relationship with them, rather than a transactional one,” Alonso said.

A new addition to the company’s membership offering was launched in December 2020, to cater to those who could not afford to pay.

Zero fee option for those who can’t pay.

Readers simply need to fill a form where they can choose the membership amount as zero and support their request with a reason.

El Diario boasts of a loyal member base with a low churn rate that oscillates between 0.8 percent and 2 percent. The Average Revenue Per User (ARPU) stands at € 6.82.

How does the brand retain members? It focuses on three core areas – technology, strategising reader loyalty and having a strong email marketing plan in place.