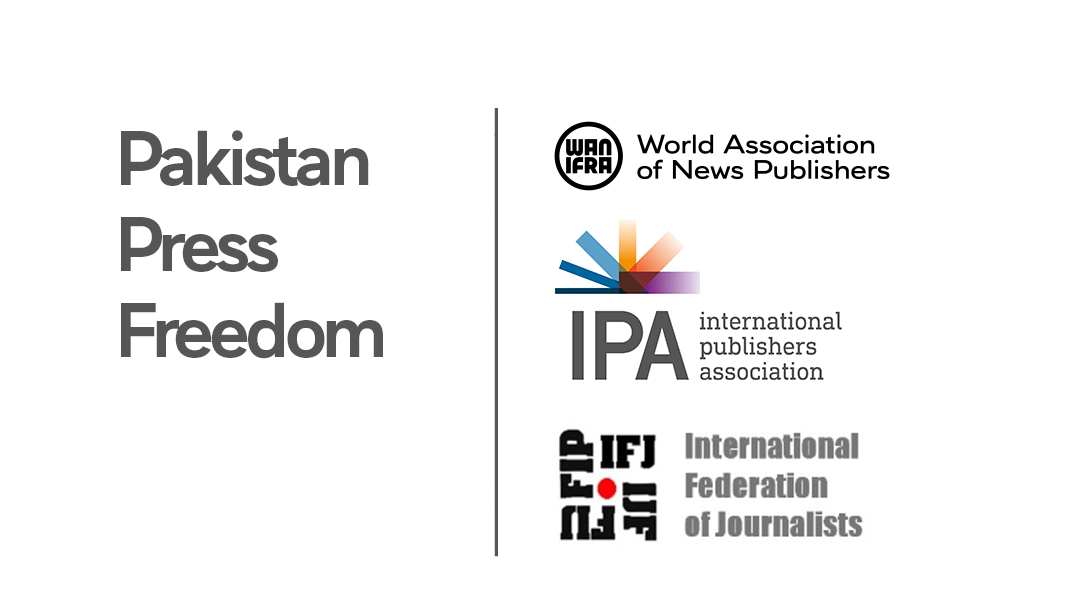 Under the pretence of “simplifying procedures and fighting disinformation”, the proposed changes to current frameworks aim to centralise under a single authority all regulations pertaining to any media. The PMDA would replace existing media regulatory bodies and would oversee “films, electronic, print and digital media” across every domain, from registrations to wages, licensing to the allocation of government advertising, as well as both civil and criminal complaints procedures.

Serious concerns have also been raised regarding the proposed governance of the new PMDA – notably a perceived lack of independence from government. Half of the PMDA board’s eight members – as well as the chairman – will be appointed by the state.

WAN-IFRA, IPA and IFJ are particularly alarmed by a provision that allows the new authority the power to shortlist members of Media Tribunals, vested with the power to hand down punishments of up to three years in jail and fines of up to 25 million Pakistani rupees (approximately $150,000 US). Decisions made by the Media Tribunals can only be appealed before the Supreme Court.

In addition, the three organisations express strong reservations about the secrecy behind the drafting of the new PDMA law, with the bill having only recently been shared by the government and receiving no input from media or civil society stakeholders.

While welcoming the establishment in mid-September of a committee that will allow media organisations to consult with the Federal Information Minister on the proposals for the PDMA, a first meeting has yet to be held or even called.

“We urge the Pakistan government to actively collaborate with representatives of the media on any such proposed law, particularly given its wide-ranging authority and the high potential for the infringement of press freedom,” said WAN-IFRA CEO, Vincent Peyrègne.

“Declarations from the government that explain the new law simply as a strategy to curb disinformation only confirm suspicions that it is instead a set of broad regulations designed to undermine critical speech and unduly control the media.”

José Borghino, Secretary General of the International Publishers Association said: “The International Publishers Association stands alongside news publishers and journalists in calling for the Pakistani authorities to withdraw their plans for the Pakistan Media Development Authority. The potential impact on freedom of expression and the freedom to publish are clear and it is alarming to see the current health crisis being used as cover to stifle independent media.”

IFJ General Secretary, Anthony Bellanger said: “The PMDA threatens to further curtail media freedom in Pakistan. The IFJ strongly urges Pakistan’s government to listen to the industry and take a step back, consult and engage with the media on much-needed reforms that will support and enable a sustainable, strong and independent media into the future.”

ABOUT WAN-IFRA
The World Association of News Publishers (WAN-IFRA), is the global organisation of the world’s press. WAN-IFRA’s core mission is to protect the rights of journalists and publishers around the world to operate independent media. It provides members with expertise and services to innovate and prosper in a digital world and perform their crucial role in society. WAN-IFRA derives its authority from its global network of 3,000 news publishing companies and technology entrepreneurs, and its legitimacy from its 60 member-publisher associations representing 18,000 publications in 120 countries. www.wan-ifra.org

ABOUT THE INTERNATIONAL PUBLISHERS ASSOCIATION
The International Publishers Association (IPA) is the world’s largest federation of national, regional and specialist publishers’ associations. Our membership comprises 86 organizations from 71 countries in Africa, Asia, Australasia, Europe and the Americas. Through its members, IPA represents thousands of individual publishers around the world who service markets containing more than 5.6 billion people. The IPA’s mission is to promote and protect publishing and to raise awareness of publishing as a force for economic, cultural and social development.  www.internationalpublishers.org

ABOUT THE INTERNATIONAL FEDERATION OF JOURNALISTS
The International Federation of Journalists is the global voice of journalists, representing 600,000 media professionals in 190 national trade unions and associations in 146 countries. The IFJ fights for media freedom and the protection of the labour, social and professional rights of journalists. www.ifj.org