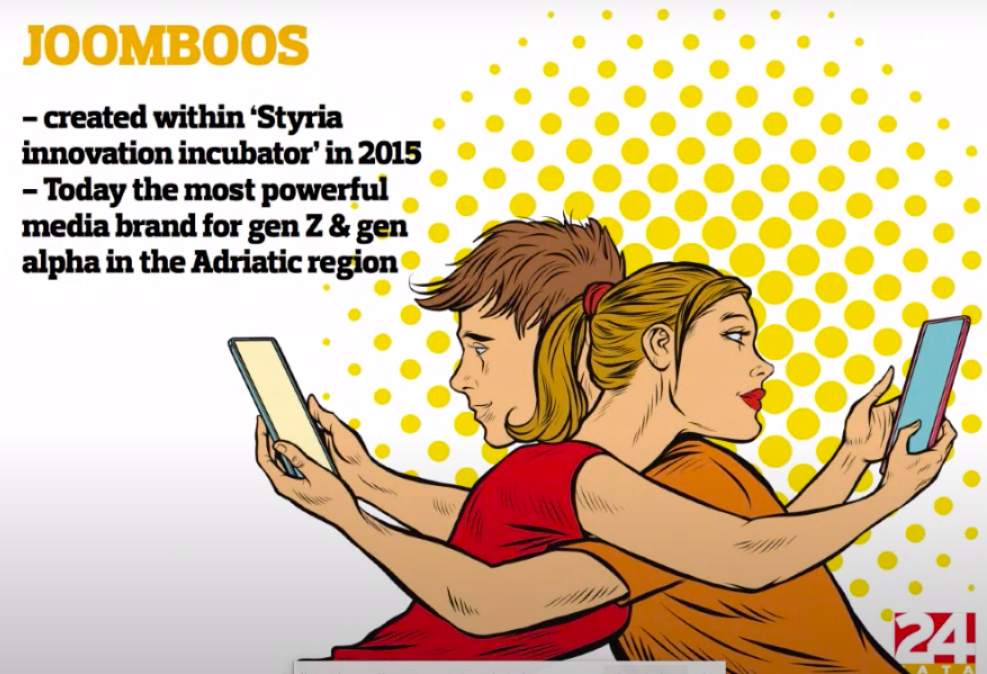 When 24sata’s cable news business shut down in 2015, the company was left with just two people in the video department. Undeterred, the lean team found success live-streaming breaking news events on social media, developing an audience that was almost entirely composed of Generation Z viewers.

Lončarić, 24sata’s Director of Video Operations and media brands JoomBoos & miss7, said, “We [Styria Media Group] are a print company. Everyone in the company was looking at me like, ‘You’re crazy. What are you doing? You’re risking so much.’”

Six years later, the channel, called JoomBoos, is the most powerful media brand for Generation Z and Generation Alpha viewers in the Adriatic region.

JoomBoos boasts more than 20 million video views a month across six platforms, and has 1 million subscribers (Croatia has a population of just over 4 million people).

Lončarić has since launched a print magazine with JoomBoos. Though the magazine costs twice the price of its competitor in the teen category, it has become the top-selling teen magazine in Croatia.

While Lončarić’s efforts in online video have been greatly successful, he remembers getting JoomBoos off the ground was no easy feat.

When JoomBoos first started in 2015, Croatia had only four professional YouTube creators with just 5,000 to 10,000 viewers per creator. At that time, advertisers also had little understanding of the market.

To find creators for the channel, Lončarić drew inspiration from the television market to host the first online talent show in the region, live-streaming the episodes to the JoomBoos channel.

Winners were flown to Los Angeles and offered exclusive contracts with JoomBoos. The strategy worked, netting more than 1,000 applicants and developing a talent pool for the channel.

Lončarić used this strategy again in 2020, when TikTok overtook YouTube in popularity in Croatia. JoomBoos’ talent show to find Croatia’s next TikTok star received over 1,500 applications. Clips and episodes of the show netted 1 million views on YouTube and 2 million views on TikTok.

In 2020, JoomBoos produced Tea’s Diaries, the most watched teen drama series in the Adriatic region, with more than 1 million video views.

The drama series received more views than programs on national television stations. By comparing viewership metrics to television, Lončarić’s team was able to communicate this success to advertisers and monetise JoomBoos as a media brand.

24sata and JoomBoos were reaching 70 percent of an audience segment that was “unreachable” to television advertisers – people who watched just an average of 25 minutes of television a day, but spent more than 4 hours on digital formats.

The next challenge Lončarić and his team faced was communicating this success to advertisers.

From 2019, they introduced a new strategy that used standard metrics such as like Gross Rating Points (GRPs) to attract advertisers more familiar with television ads into the digital environment.

They also found that advertisers were reluctant to support live breaking news on 24sata.

To reach these advertisers, the channel branched out to live sports, securing exclusive rights to MMA tournament Armageddon, which Lončarić says netted comparable views to MMA events broadcast on television.

Before this strategy, native and branded content comprised 90 percent of 24sata and JoomBoos’ revenue.

“Why don’t we like native? We produce so many native things, we are not focusing on our user. And our user is the most valuable thing for us. We don’t want to break that relationship,” said Lončarić.

By introducing GRP reporting and educating the market, he said 30 percent of revenue now comes from pre-roll ads.

Ten percent of revenue comes from production, with 24sata producing livestreams and live shopping shows for clients in their studios.

For Lončarić, the key to staying successful has always been innovation.

Every six months, he and his team undergo a new phase of content creation and begin searching for their next project. He said they are currently planning to produce a series for third-culture Croatians, with plans to pitch it to global streaming services.

About the author: Alysha Chandra works in marketing. She recently graduated from Yale-NUS College, where she served as the Editor-in-Chief of student newspaper, the Octant.