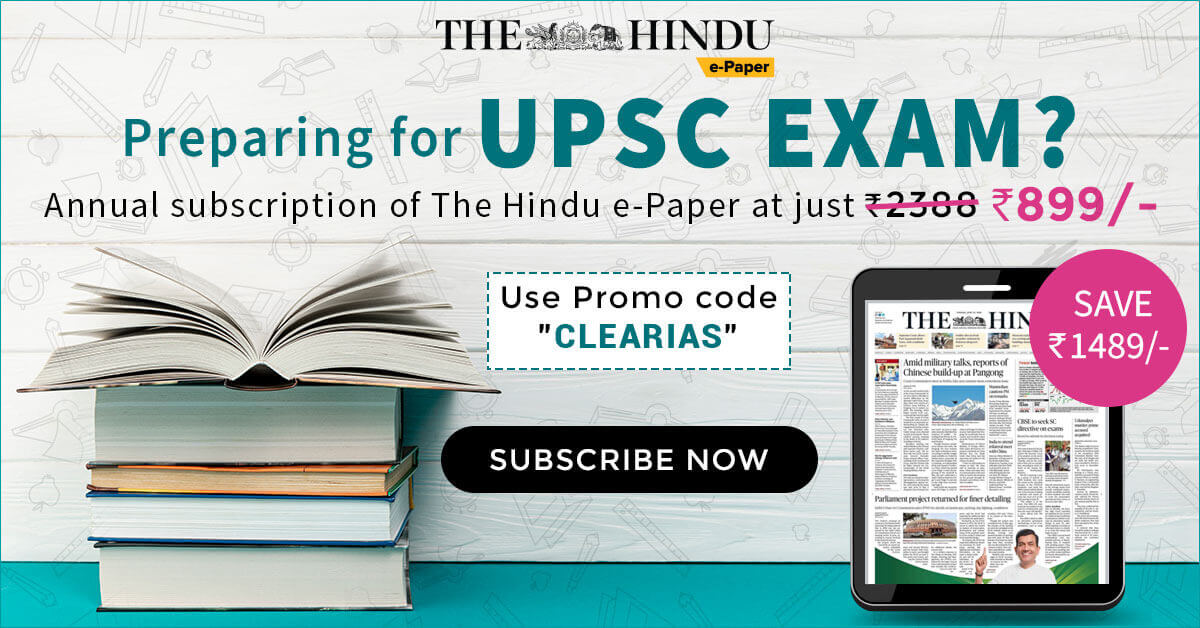 Pradeep Gairola, the VP & Business Head for The Hindu Group, joined WAN-IFRA’s ongoing 12-part webinar series with the Meta Journalism Project to discuss the ups and downs the organisation faced while launching new subscription products, acquiring new readers and retaining the ones they had.

The Hindu started paying close attention to its e-paper offering only when the COVID-19 pandemic hit in 2020. The brand quickly realised that e-paper trends in India are vastly distinctive from those in Western countries where the product is considered a mere transition tool from print to digital. As a result, the company decided to chart its own strategy, putting dedicated resources to the product, instead of looking at international media for inspiration.

Currently, 63 percent of The Hindu’s audience is younger than 34 years of age, proving the assumption that young people don’t subscribe to e-papers wrong.

The company now has a dedicated product manager and subscription team as well as acquisition managers and retention managers for the e-paper. 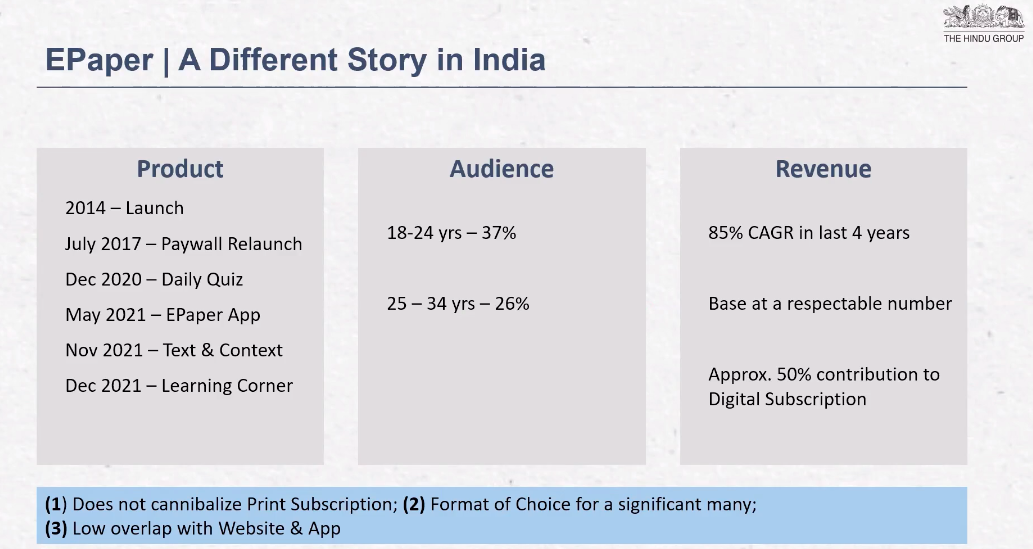 The Hindu also employs a few tricks to acquire subscribers through its e-paper. In December 2020, the company launched a daily 10-question quiz, based on the news from the daily newspaper or e-paper. The free product received a dramatically good reception from the market.

This motivated the company to launch its exclusive e-paper application for Android and iOS.

A large number of The Hindu’s e-paper subscribers are students preparing for competitive exams. They are in need of deep perspectives and context about national news. So, in November this year, the company launched two exclusive e-pages called Text and Context, e-paper exclusive pages, which are published on weekdays provide deep insight into the context and analysis of news.

In December, The Hindu will launch Learning Corner – a product that aims to provide resources to students preparing for competitive exams and will comprise elements such as quizzes and analytical articles.

“We believe the e-paper is a format of choice in India and a significant number of people have a comfort level in navigating this product. As far as the future of The Hindu is concerned, we are very bullish on the e-paper, and will continue our experiments and investments with it. If you’re a legacy media company, the e-paper is an excellent way to start your subscription journey,” said Gairola.

The Hindu launched The Briefcase, a mobile application that provided subscribers with the five most important news stories of the day, in April 2018. The app was ad-free and behind a hard paywall. It was priced at Rs 99 (€1.16) a year, but it failed to take off.

By June 2019, The Briefcase had acquired 6,000 paying subscribers but it was not a sustainable product for the company with the low price point. Before shelving it, the company experimented with its pricing, by turns increasing it to Rs 149 (€1.175) and decreasing the price to Rs 49 (€0.58) a year; but nothing worked.

“We thought we would be able to acquire many subscribers through such a nominally priced product, without much marketing support. We learned from these experiments that pricing is not directly related to subscription volumes, as we had initially thought,” Gairola said.

The company launched The Hindu Digital website with paywalled content in February 2019. To get the pricing right this time around, the brand conducted reader surveys and received fairly divergent views – brand lovers wanted the price to be high, while other users wanted the website to remain free or to have a nominal price. 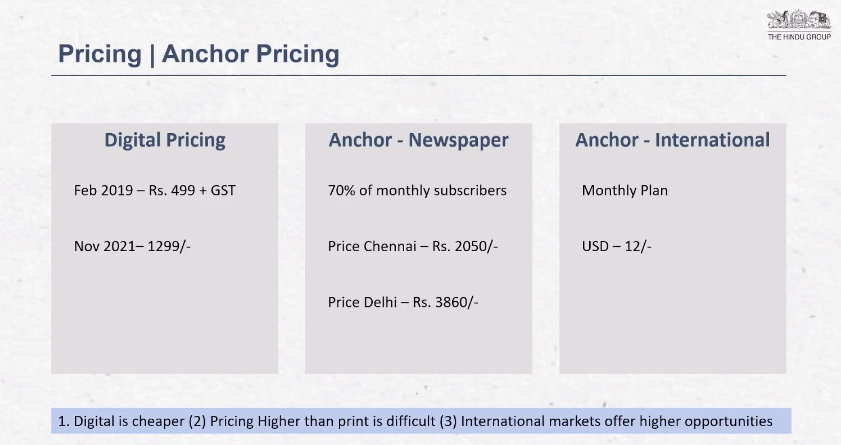 The company realised its strategic error in pricing its digital product was in not using the print product subscription price as an anchor.

“As our print annual subscription ranges from about Rs 2000 (€23.52) to Rs 4000 (€47.04) per annum depending on the geographical area, we could have charged more for the digital product from the get-go,” said Gairola. “By fixing the digital price dramatically below the print anchor price, we created a new pricing anchor for digital. This will take us a long time to correct because consumers are now accustomed to paying the low rate.”

Frontline is The Hindu’s political, long-form magazine that was put behind a paywall in March 2020 and has been doing well.

The company’s data analyst found that several Frontline subscribers also end up subscribing to The Hindu e-paper, which was surprising for the company because the two products had no bundled offer plans.

After conducting a couple of experiments, the company launched a UPSC Special subscription that enabled an e-paper subscriber to add on Frontline magazine at Rs 300 (€3.53). 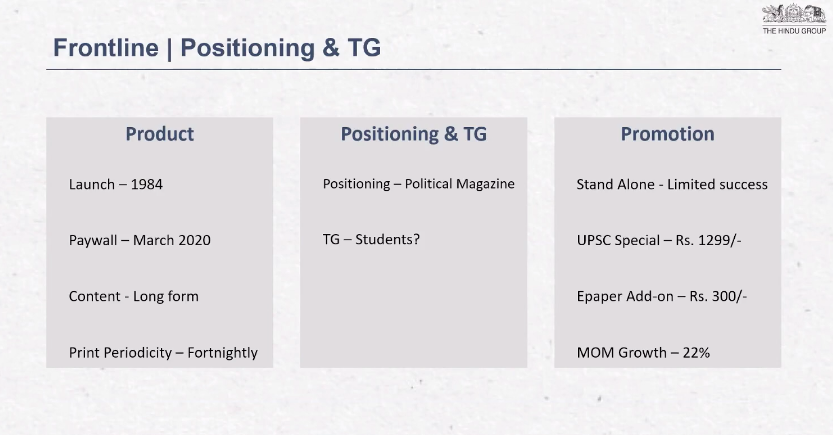 This was a smart move because The Hindu’s CAGR has been 22 percent ever since it has made Frontline a paid product.

“In the last one year we have witnessed 10x growth. Looking at results from last month, we are growing at 22 percent month on month,” Gairola said.

In this case, the company’s learning was understanding its audience better.

“We thought the magazine would be received well only among people with interest in politics, but we were proven wrong. I’m certain this long-form paid product of ours is going to have a way bigger appeal soon,” he added.

“We started analysing our cost of edit and our contracts. From 2018-2019, we cut out 99 percent of our contracts including tie-ups with telecom companies, browsers, and even people selling our subscriptions. We realised the value we were getting was not very high, and in the last year we have said no to almost 50 tie-up opportunities,” Gairola said.

The company now has well defined guidelines in place for branding deals to create a sustainable and strong business.

“We have increased our presence on platforms such as Instagram, Meta, YouTube, and Spotify, but we are still withholding from putting our paid content on there. We don’t want to use our talent bandwidth in projects with no revenue upside,” Gairola said.

Gairola’s advice for publishers is to ask themselves if their content is free to consume everywhere, then who is going to pay for their subscriptions? “If you have an answer to that question, go ahead and distribute your content,” he said.