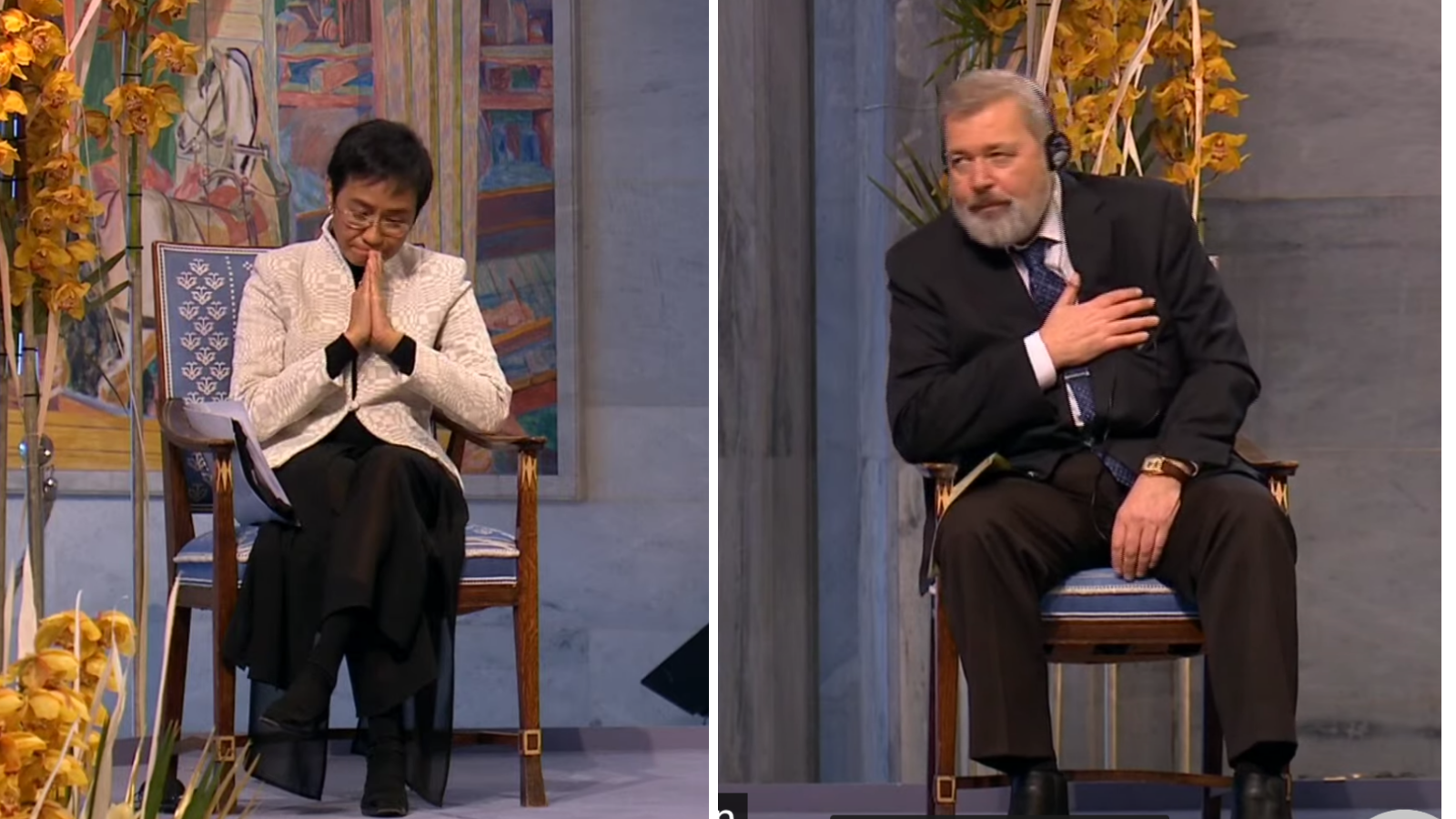 In 1935, journalists wrote on typewriters and their stories were set in lead type. Breaking news meant printing an afternoon paper, but many journalists were learning the format of that exciting new platform called radio.

1935 was also the last time a journalist won the Nobel Peace Prize.

Although a journalist today might not recognize the technological landscape, most will surely find the political scene awfully familiar. Authoritarian regimes on the rise, cracking down on independent journalism as they prosecute, jail or murder those who expose corruption, abuse of power or criminal conduct, or guarantee impunity to anyone attacking a journalist.

Maria Ressa in the Philippines, and Dmitry Muratov in Russia, work as journalists in that environment. This week, they receive the Nobel Peace Prize for their work, which symbolizes the work of hundreds of journalists at great risk of physical harm, legal liability, or economic hardship. As the award citation reads, selecting both journalists “is intended to underscore the importance of protecting and defending” freedom of expression and information.

Unfortunately, Maria and Dmitry are representative of a wider trend, one that seems to have grown over the past years: the loss of respect for the value of press freedom, even in societies that had once taken it for granted.

A solid investigation of government corruption can provoke prosecution. Revealing illegal activities by private companies can unleash a response of unlimited resources to smear a journalist. Exposing a criminal network can get a reporter or editor killed, and then killed again when authorities do not prosecute the perpetrators.

The 1935 Nobel Peace Prize to German journalist Carl von Ossietzky reminds us journalism has always faced this peril, especially when the truth affects the powerful. Ossietzky was jailed by the Nazi regime for revealing details about Germany’s rearmament during the 1920s, in violation of its international commitments. He also warned of rising anti-Semitism and militarism. Authorities jailed and tortured him.

Back in 1935 the concept of independent journalism was taking root, moving away from the previous century’s model of political activism, and toward a watchdog role that would be its trademark in the following decades. It survives today, even as social media enables information “bubbles” where every person can follow only the news they agree with and consider everything else to be fake.

These bubbles decrease faith in hard facts and a free press, while populist politicians exploit these attitudes. And yet, journalists march on despite harassment, pressures, or attacks.

“You don’t really know who you are until you’re forced to fight to defend it,” Maria Ressa said in 2018 when she received the Golden Pen of Freedom that the World Association of News Publishers awards annually to journalists fighting for their right to publish. By then, Maria had faced a legal offensive designed to keep Rappler, the online newspaper she founded in 2012, from exposing corruption and abuse of power by President Rodrigo Duterteof the Philippines. She faced online harassment that led her to become one of the first journalists to denounce social networks for enabling the enemies of a free press.

Two years earlier, Dmitry Muratov received the same award. By that time, six journalists from Novaya Gazeta, the newspaper he founded in 1993, had been killed, among them Anna Politkovskaya, one of Russian president Vladimir Putin’s fiercest critics.

Dmitry and Maria had improbable journeys. Maria left her career in global media to launch Rappler and report in her homeland. Dmitry began as a journalist in Soviet-era Russia and quickly knew that without independence, journalism is powerless.

Today, they are the contemporary expression of a line of journalists that, like Carl von Ossietzky before them, are committed to exposing social and political evils that hinder peace. They denounced racism, dictatorships, political repression, drug trafficking, terrorist groups, human rights abuses, impunity, war crimes or military build-ups.

With Maria and Dmitry, scores of journalists and media entrepreneurs around the world continue that line, from Myanmar to Nicaragua, from Ethiopia to Turkey, from Mexico to Iran and from Saudi Arabia to China. Their names might not be as familiar as our soon-to-be Nobel laureates, but are worthy of mention: Anye Chang Naing, Carlos Joaquín Chamorro, Dawit Kebede, Can Dündar, Marcela Turati, Mohammad Mossaed, Jamal Khashoggi, Jimmy Lai. The list leaves out so many people, but it is enough to know that the fight for press freedom extends far and wide.

Carl von Ossietzky received his Nobel prize in 1936, a year after it was awarded. That same year, the prize for Literature went to American playwright Eugene O’Neill, who once famously wrote:

“There is no present or future, only the past happening over and over again, now.”

Every day, Maria Ressa, Dmitry Muratov and their colleagues around the world struggle to defeat that curse.

Javier Garza Ramos is a journalist based in Mexico and a board member of the World Editors Forum.

This article was commissioned by the World Editors Forum / WAN-IFRA to mark the awarding of the 2021 Nobel Peace Prize to two of its Golden Pen of Freedom laureates.

It can be republished, using the above credits to the author and the World Editors Forum / WAN-IFRA.