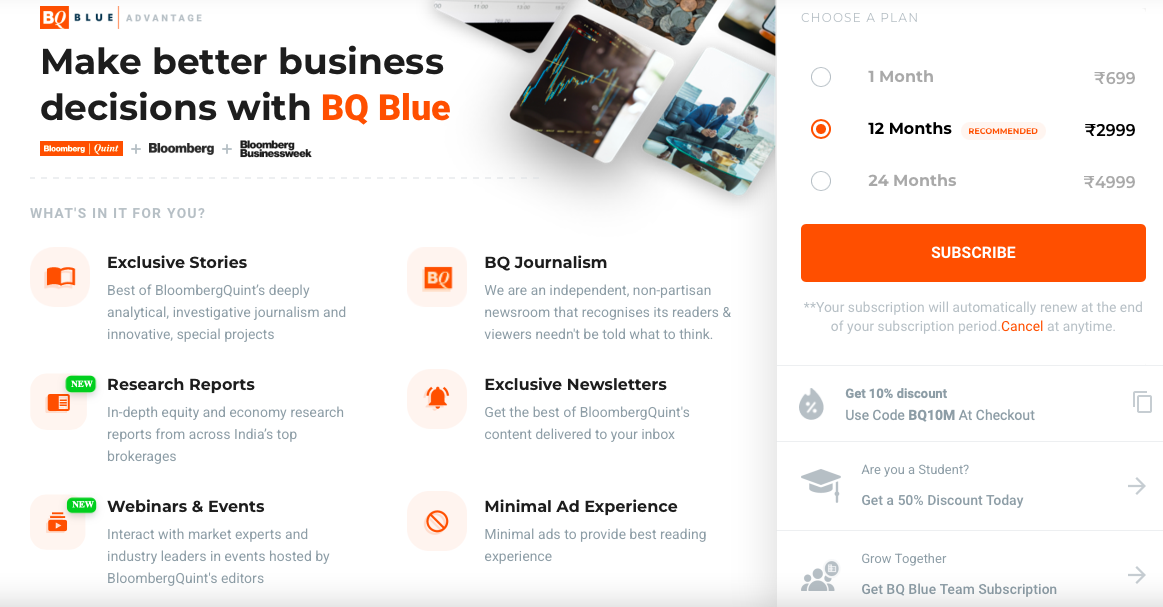 The brand launched in 2016 and is a multiplatform, Indian business and financial news company.

BQ was formed with the vision of combining Bloomberg’s global leadership in business, financial news and data, and Quint Digital’s expertise in the Indian market and digital news delivery. They aim to serve the niche interested in stock markets, economy, corporate action, and law and policy.

The company oriented its business towards reader revenue when it launched a hybrid paywall in December 2018, with a few free stories, some were metered and a few behind a hard paywall. In 2020, the brand stopped offering free stories.

Users can also choose to opt for micropayments in the form of “pay-per-article.” The product gives subscribers unlimited access to articles, exclusive newsletters, research reports, events, webinars from BloombergQuint, Bloomberg (global) and Businessweek. It offers a minimal ad experience.

Like most media companies transitioning towards a digital paid model, they have done a lot of experimenting. Here is what BQ said has worked so far:

Capitalising on reader behaviour data. They reduced the number of free stories from five to three, and increased the number of metered and hard paywall stories. In April 2020, they removed free stories completely and were able to increase the rate of those hitting their paywall by 100 percent.

BQ also increased its ARPU (average revenue per user) by promoting its 24-month plan to loyal users while  pushing the annual plan to potential new subscribers. When the brand first launched its subscription business, it was offering 3-month, 6-month, and 12-month plans.

However, after three months the company realised it needed to lock in people for longer periods. “We ran a test with our loyal customer base and offered them our 24-month plan,” Khanna said. “The positive response motivated us to launch our current plans on offer.”


The brand is also focused on communicating its core value proposition to users via its subscription page layout and design, paywall offers, and emails from the editor during the onboarding process. “One needs to be very clear on the brand proposition. For us, it’s to make better business decisions,” he said. “We have designed our subscription page after a lot of A/B testing to ensure that whoever lands there understands why they should subscribe.”

Khanna said it is important to take timely feedback from your various audience segments via surveys – non-subscribers, churned-out users, loyal subscribers. The brand responded to subscriber feedback and increased stock market-focused content by scaling up the Research Reports section and IPO coverage.

Applying registration on select stories to bring more users into the subscription ecosystem has been one of BQ’s most successful experiments to date.

“Once a user encounters a story with a registration prompt, we made sure they knew that no credit card was required for this purpose and tried to make the journey as optimised as possible,” Khanna said. “The conversion rate of registered users can be 10x better than that of anonymous visitors.”

After analysing the results of the experiments, the company doubled down on certain efforts to increase subscriptions and began focusing on data-based segmentation and engagement. Khanna lists four kinds of segmentation techniques publishers can use to understand their audiences better – geographic, demographic, behavioural and psychographic.

BQ found that 80 percent of its users visited the website only once. The brand chases a magic number of five and refers to people who visit the website 2-3 times a month as potential loyalists.

“For instance, users with five active days on the platform will be more prone to getting converted to subscribers. The idea is to convert those potential loyalists into loyalists through the RFM model – recency, frequency, monetary value,” said Khanna.

BQ acquires most users through Google, but also uses partnerships. In 2018, the brand tied up with Cred, an Indian fintech company, and offered a one-month free trial and the option to redeem 40,000 coins to Cred users.

Engagement is key to increasing subscription, conversion and retention rates. The company used engagement channels such as social media, email, push notifications, and messaging apps to focus on communicating its core value proposition to its users.

From their experiments, Khanna says the first 90 days after a user signs up are the most crucial to building a habit. “If a user visits your website at least five times in a month, they are most likely to become loyal subscribers.”

With half a million people on its WhatsApp channel, and having analysed their consumption patterns through data-driven techniques, BQ was successful in driving a lot of subscriptions through it. “Through this method, we experienced quality visits, more frequent visits, and a lower bounce rate,” he said.

For BQ, engagement, combined with personalised communication, is its topmost priority when it comes to retention.

“Retention should start the day the user subscribes and not after they are churned out. For that, we chase the number 10. If a subscriber doesn’t have at least 10 page views a month, we run campaigns to engage with them, send them letters from the editor and the CEO, try to understand what they are looking for, and make relevant changes,” Khanna said.

With the current changes in the Reserve Bank of India policy putting a stop to recurring payments, retaining users has never been this challenging. (RBI is India’s central bank and regulatory body).

“One needs to build a dedicated win-back campaign by cross-channel communication methods to resurrect and retain users. Most of the churn is involuntary, where people are not aware that their subscription has ended. It’s here that we use our social channels, push notifications, email campaigns or in some cases, even call the users,” Khanna said.

Editor’s note: Vaibhav Khanna has since changed jobs and now works at The Indian Express.