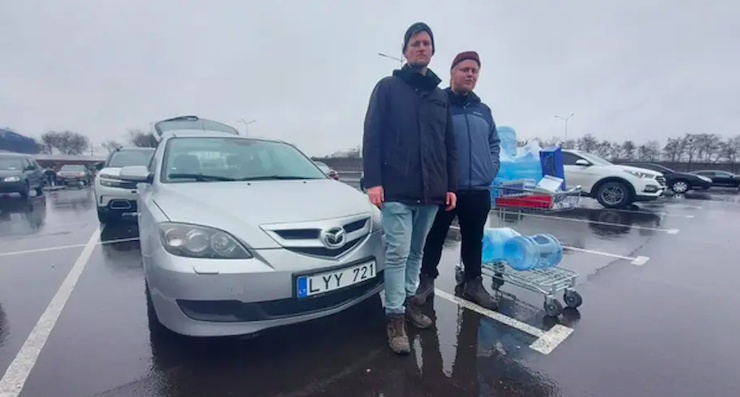 While on assignment for Danish newspaper Ekstra Bladet, journalist Stefan Weichert and photographer Emil Filtenborg were shot multiple times inside a car last Saturday. They were in Okhtyrka, a city some 50 kilometres from the Russian border to investigate bomb damage at a kindergarten. While near the frontline their car came under fire from close range, with Weichert being shot once in the shoulder and Filtenborg taking three bullets to the legs.

Thank you for all the kind messages. @efmikkelsen and I are alright after being shot in Okhtyrka near the frontline. Our car came under fire as we were going to see a damaged kindergarten in the city. #Ukraine #UkraineWar 1/

On Wednesday morning, the journalists took to Twitter to update users on their condition. Weichert wrote that he was on his way home to Denmark to undergo surgery, while Filtenborg posted that he was also going home, and thanked people for their messages of support.

The experienced duo had moved to Ukraine three years ago, sensing the Ukraine-Russia story was going to escalate, Knud Brix, Editor-in-Chief of Ekstra Bladet, told the World Editors Forum. They are “tough guys” and had been working as stringers, covering a lot from the separatist areas of Donetsk and Luhansk for Ekstra Bladet, the Daily Beast and other news organisations.

In mid-February, with tensions rising in Ukraine, and a dramatic increase in demand for the services of freelance journalists, the Ekstra Bladet editor had just days before the Russian invasion, and offered them a contract for their work. With the contract came insurance and organisational support.

Both Weichert and Filtenborg were well versed in safety and security, said Brix, indeed probably more cautious than the protocols advised. Their security measures included a safety network of people in Denmark who were kept advised of their movements via secure mails. “I was in daily contact with them, obviously not trying to direct them, because they had good knowledge of the area and risks, just asking the critical questions,” Brix said.

He was tracking their movements last Saturday and was concerned he had not heard from them. He then “got the call every editor dreads”.

In an open letter published in Ekstra Bladet, Brix shared his concern while praising them for their professionalism and courage. (Translated from Danish into English):

As I write this, you are in an ambulance in a safe country with no cellular connection. So allow me to write an open letter instead.

Saturday afternoon I got the call that every editor dreads.

I actually already had a bit of a stomach ache because you hadn’t replied to my messages for a couple of hours. Since we hired you at Ekstra Bladet, shortly before Putin attacked Ukraine, you have been extremely professional and sent regular updates on your whereabouts every day.

One of your good friends was on the other end of the line – and in his stream of words I understood that you had been shot. The rest of the conversation is a bit of a blur to me.

But I will never forget when I got you on the phone shortly after, Stefan. In a stoic voice, you explained to me that you didn’t know Emil’s condition, but thought you ‘probably both would survive’.

You told me that, as agreed, you had gone to a kindergarten in the town of Okhtyrka to see if it had been hit by cluster bombs. While sitting in your car, you were shot at from a short distance with heavy calibre weapons and both wounded.

You told me in your witty Jutlandic, Stefan, that you ‘slammed the accelerator’ and fled from the hail of bullets in the smoking car.

You will have to tell the rest of the story in detail when you hopefully soon return safely to Denmark.

Journalists should not drench things in pathos. But allow me to say how incredibly proud we are at Ekstra Bladet of your efforts. You are a shining example of how important it is to cover the war.

You are reporters of the highest calibre. Always calm, never self-promoting Instagram correspondents. You’ve been readers’ eyes and ears on the front lines of a horrific piece of world history. You’ve lived permanently in Ukraine for nearly three years, freelancing for Danish and international media, you speak the language, and you understand war like few others do. Throughout the complicated evacuation from the war zone, you have mustered an unimaginable calm, with a dash of Jutlandic humour and biting sarcasm underneath the hell of pain.

On behalf of the readers of Ekstra Bladet I want to thank you for your courage.

PS. I have the herring sandwich and Brøndum schnapps ready, which was your only wish for when you come to Ekstra Bladet.”

Weichert and Filtenborg were lucky to have been on contract for Ekstra Bladet, which afforded them the security and insurance offered by the publishing house JP/Politikens Hus. But the incident highlights the potential danger to journalists reporting from the front line without similar safeguards.

WAN-IFRA and the World Editors Forum have called for journalists on the ground to be offered maximum protections. Additionally, they have published a list of freely available resources for news organisations and reporters to cover the conflict safely and securely.