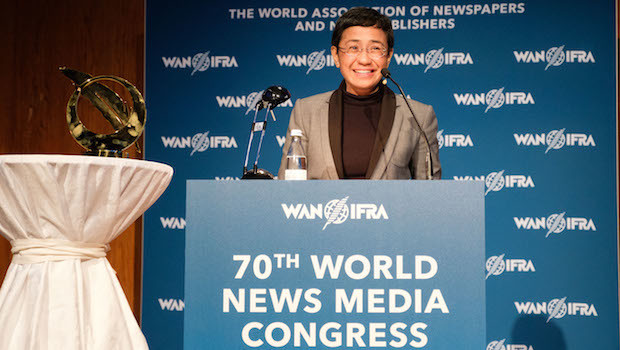 “We are hugely disappointed by this latest decision and stand alongside Maria, Rey, and the entire team at Rappler as they prepare once again to fight a system that increasingly opposes investigative journalism and the freedom of the press,” said a statement from WAN-IFRA.

The original charges relate to an article the news site published in 2012 that revealed a prominent businessman’s alleged ties to drug smuggling and trafficking, as well as his relationship to a senior judge. The original complaint was filed in October 2017, more than five years after the story appeared.

Despite the elapsed time, and the fact that the law the pair have been found guilty of violating was passed four months after the original article was published, the Justice Department argued that the article was effectively republished in 2014 when a Rappler employee edited a spelling mistake, bringing it under the new law’s jurisdiction.

The Court of Appeals affirmed the initial decision handed down by a lower court in Manila in June 2020, adding eight months and 20 days to the prison sentence the pair could possibly face.

“The appeal is denied. The decision of the Manila Regional Trial Court Branch 46 finding accused Reynaldo Santos Jr. and Maria Ressa guilty beyond reasonable doubt of violation of Section 4(c)4 of Republic Act 10175 otherwise known as the Cybercrime Prevention Act of 2012 is affirmed with modification insofar as accused are sentenced to suffer the indeterminate penalty of imprisonment ranging from six months and one day as minimum to six years and eight months and twenty days as maximum.”

Ressa faces six other court cases against her and the company she co-founded in 2012.

“Both [Ressa and Santos] will avail of all legal remedies available to them, including elevating the decision to the Supreme Court for review,” said a Rappler statement published shortly after the verdict was delivered.

“While the decision is unfortunate, it is also a good opportunity for the Supreme Court to take a second look at the constitutionality of cyber libel and the continuing criminalization of libel, especially in light of the freedom of expression and freedom of the press,” the statement from Rappler said.

The ruling comes just 10 days after Rappler was forced to shut down by the Securities and Exchange Commission for violating “constitutional and statutory restrictions on foreign ownership in mass media.” The shutdown came ahead of former president Rodrigo Duterte’s final day in office. Rappler has been a long-time critic of Duterte’s presidency and the human rights situation in the Philippines under his administration’s controversial war on drugs. As a consequence, the media outlet – and Ressa personally – have been subjected to repeated judicial and online attacks.

It remains unclear how the environment for press freedom may change under the new administration of Marcos Jr.

“What is ultimately at stake is our democracy whose strength rests on a media that is not threatened by the state nor intimidated by forces out to silence critical voices,” Rappler’s statement continued.

“We are hugely disappointed by this latest decision and stand alongside Maria, Rey, and the entire team at Rappler as they prepare once again to fight a system that increasingly opposes investigative journalism and the freedom of the press,” said a statement from WAN-IFRA. “We can only hope the Supreme Court quashes these convictions at its earliest opportunity, and decriminalises libel – as it has previously considered – as a means to reinforce press freedom in the Philippines.”