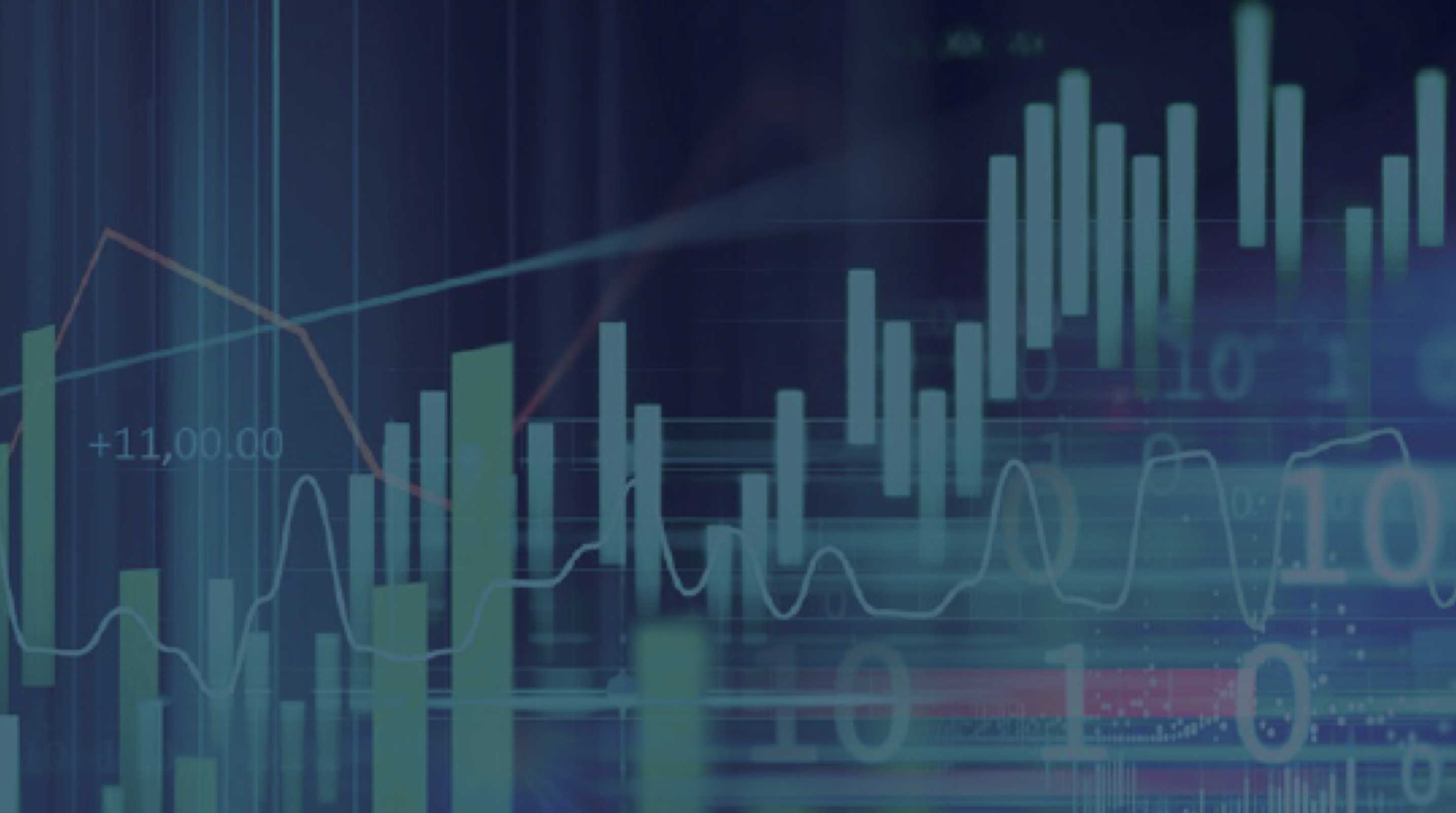 Our global survey: We surveyed about 75 publishers from 32 countries all over the world in July with just five questions: Are you a national or regional? Have you raised your prices in the last 12 months? If so, by how much? What impact did it have on circulation? And do you plan to increase prices in the next 12 months?

In summary: About 52 percent of publishers responding said they were national dailies; about 48 percent were regional or local. Nearly 65 percent of publishers participating said they raised the price of their print newspapers in the last 12 months. About 16 percent of those raised their prices by more than 30 percent. Nearly 50 percent saw little or no change in churn, a few even said their circulation increased (dubious? perhaps…). And nearly 50 percent say they plan to raise their prices in the next 12 months, while 28 percent say they are contemplating a change. See the charts below. 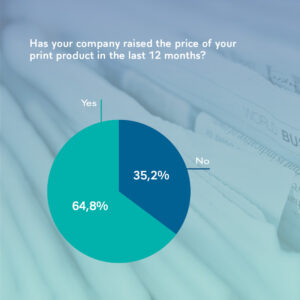 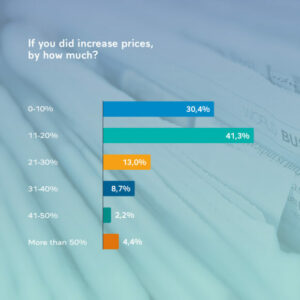 Of those publishers that said they have raised their prices in the last 12 months, the majority have done so at a rate between 0-20%, but a significant number have been even more aggressive, 4.4% even raising theirs more than 50%. 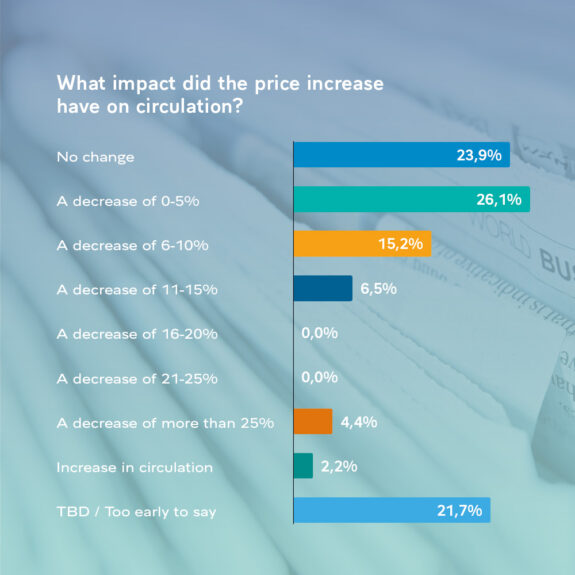 While some publishers have experienced some significant churn after raising their prices, the majority have had churn within a manageable rate, considering the typical YoY decline in print circulation. Yet, there are a number of newspapers that are waiting for results. 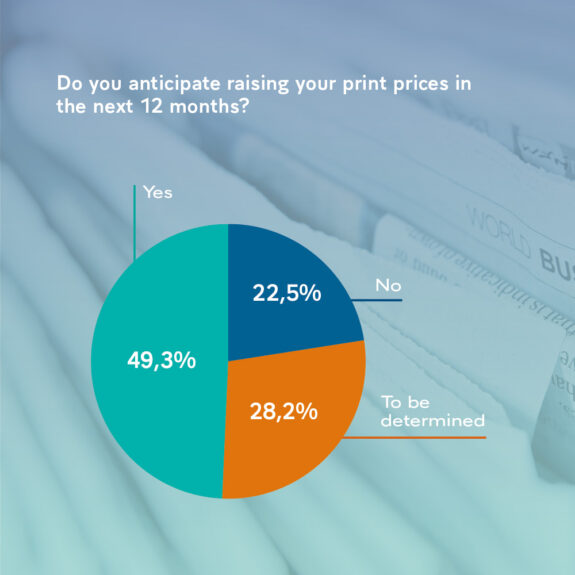 With nearly 50% of respondents indicating that they will raise their print prices within the next 12 months and nearly 29% contemplating a change, it indeed looks like publishers see an opportunity to increase the value of their print products – perhaps not just for the short term. Read below.

Perspective: As news publishers around the world increase their focus (rightfully so) on the transition to a more digital and diversified future, the bridge leading to that day – PRINT – is still the primary platform of revenue for most. In our most recent World Press Trends report (published in early May), our estimates based on our global survey of publishers and PwC’s annual Global Media & Entertainment report data, print makes up 73% of overall income for newspapers; print circulation makes up nearly 42% of overall revenue. Digital makes up 16.4% of total revenue, while digital circulation makes up 5.7% of overall revenue. (It is worth noting that we reported other revenue streams in that report that totalled nearly 21% of overall revenues, a very positive development.)

So why the increases in print prices?

To squeeze every penny out of print while you can? To offset the increasing costs of materials and delivery – much of that directly related to the Ukraine war? Or is it just more sophisticated pricing strategies: charging more for a valued, increasingly niche product that loyal readers are willing to pay for? Probably a combination of those, but it’s real.

“We are working with over 400 publications on pricing, and the vast majority are raising print prices (see chart below),” said Matt Lindsay, President of Mather Economics, which advises news media and other industries on subscription, pricing and revenue management. “We do see a focus on long-term strategic objectives this year instead of short-term revenue objectives. We help publishers maximise the expected value of the print product operating margins through price increases, bundling, and operational changes (migration to hybrid products, fewer print delivery days, mail delivery options.) We also help them with minimising churn from non-price reasons.

“Print products still represent the overwhelming majority of subscription revenue and operating margins even though it has more costs than digital. The average rates of print are so much higher than digital-only.

“The long-term objectives are maximising the expected value of the print revenue stream. In recent years, there has been more of a focus on current-year revenue, so there were more aggressive pricing actions on print than what we are seeing now. We are seeing a move to lessen premium-day revenue and additional fees, which are observed to increase churn.” 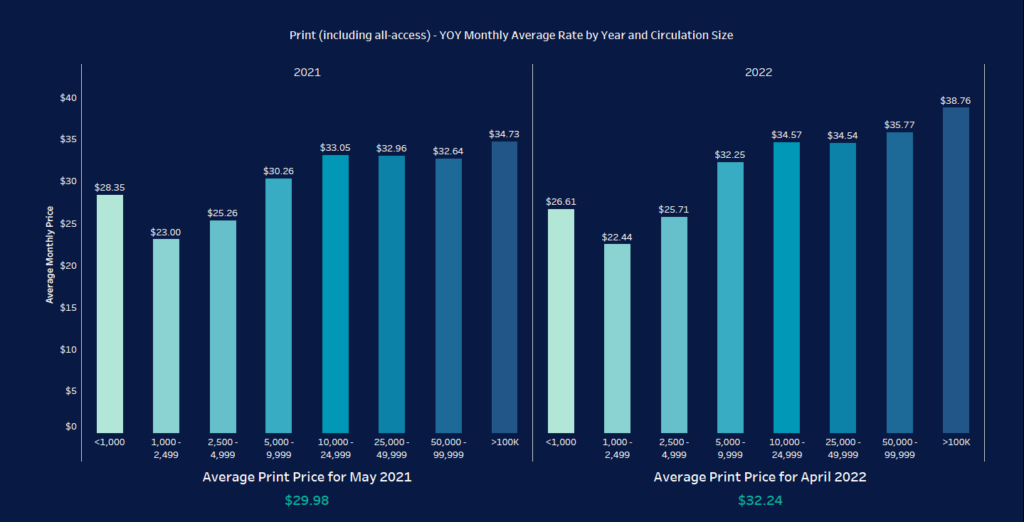 Pricing specialist Mather Economics benchmarked 400 of its US clients and produced a comprehensive report. This shows the average monthly rate of print pricing, based on circulation, over 2021 and 2022. For the most part, you can see increases YoY.

One national newspaper that has been quite aggressive in pricing is The Globe and Mail in Canada. At the Asian event, CEO Phillip Crawley shared how G&M is accelerating growth to higher levels even compared to pre-pandemic. And much of that can be attributed to print, he says.

“While others cut back on print (during the pandemic), we decided it was a good time to invest. It does make a difference. Readers notice. As do advertisers.” Today, The Globe and Mail has 300,000 subscribers, of which 210,000 are digital-only and 95,000 are print subscribers.

“A subscriber buying print and digital will be paying 650 dollars and upward (Canadian, about €493) per year. Some people are paying 800 dollars,” said Crawley. “So we work hard to justify this premium pricing, and we do it by spending on quality journalism.”

In 2021, Crawley said the company’s print advertising revenue increased by 8 percent and print subscription revenue by 1 percent, a far cry from most other North American counterparts. The brand has managed to ensure that the contribution from print is at an 18 percent margin level.

In a panel discussion at the same event, Andy Budiman, CEO of KG Media in Indonesia, which publishes the national daily Kompass, shared his company’s strategy on pricing print.

“For us, actually the majority of profit is generated by digital, but print still reaches what we think is the most influential audience in Indonesia, which are decision-makers in private and government sectors. So for us, as long as this audience still reads and trusts our newspaper – maybe even above other platforms – print still has a real influence and a purpose. And as print becomes more and more niche, we have reached a point where we see that the print audience has a high willingness to pay for the product. So this year, we increased the cover price of Kompass by 45 percent, and we expected that this would result in a huge drop in our circulation. But, in fact, what we see is a far smaller decrease in our circulation than we anticipated. So this clearly shows that they appreciate the product and are willing to pay for it.”