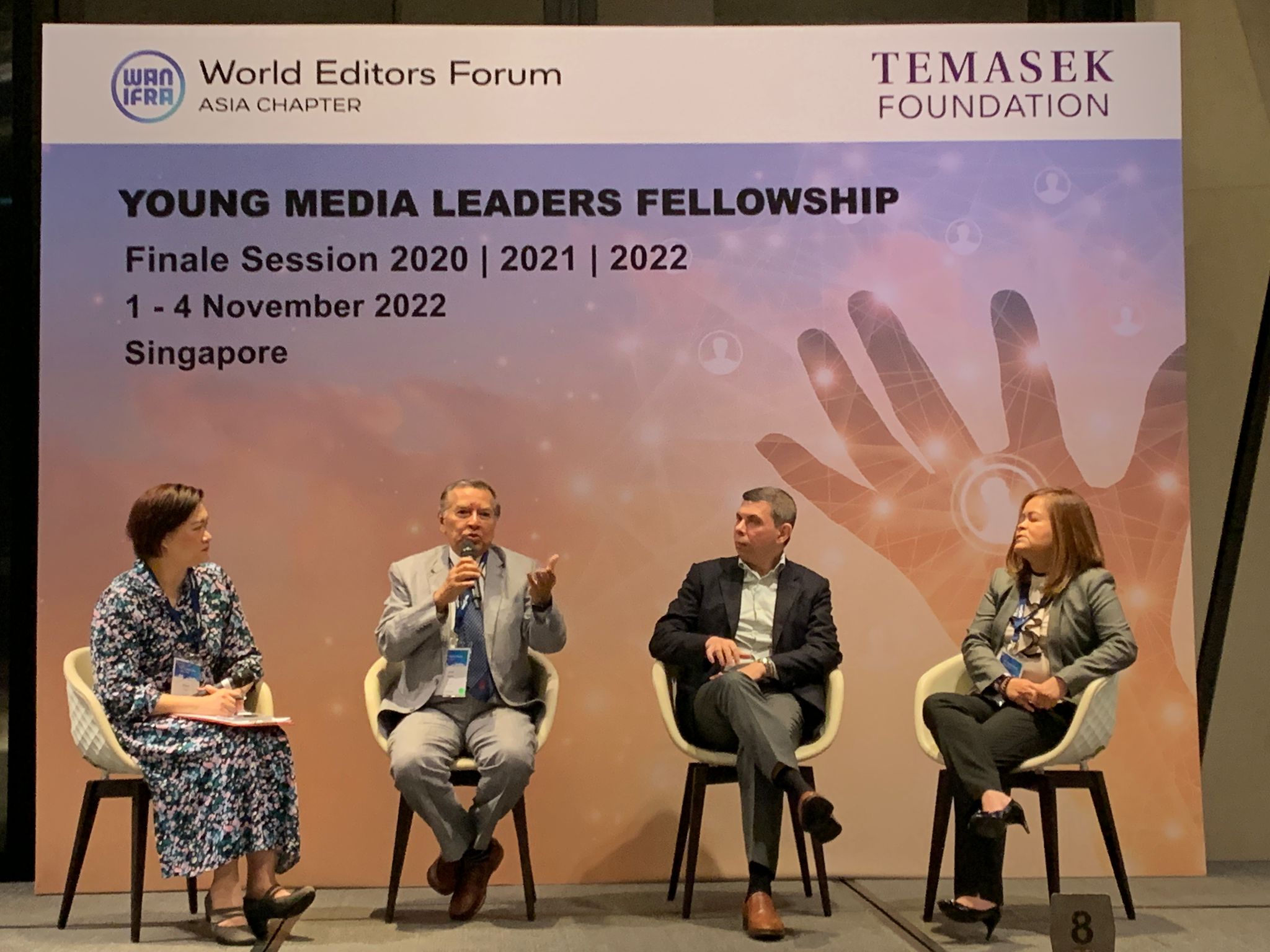 “Being a young media leader is about having responsibility, setting examples and being the person who inspires – and allows your followers to have the confidence to emulate you,” said Mahfuz Anam, Editor and Publisher of The Daily Star, Bangladesh, a newspaper he founded over 30 years ago.

“You face a cycle that is counter to independent media and freedom. Nationalism and racialism are such powerful narratives that impinge your right to freedom of speech. Rapid technology change, including the oncoming wave of artificial intelligence, compound things.”

“What has not changed is the values of journalism,” said Anam. “Your first internal commitment is to adhere to the truth, to the telling of facts and to question the fundamental and powerful narrative of the day. Your job is to challenge that narrative. What an onerous task.’

“You need to be a person of ethics, with a commitment to ever-learning, to have an openness of mind. Those factors will enable you to talk truth to society,” said Anam.

“While social media has introduced democracy at a personal level, ethical journalism is the only antidote to speed, dispersion and the multiplicity of views. It is like when in a tsunami – you have to hang on to a strong tree, and when the waves pass, you will have fertile ground to rebuild. People will get fatigued by the multiplicity of views available on social media and will seek reliable and credible voices – they will come to institutionalised media for verification. That is our unique value proposition on which to survive.” said Anam.

Deep battle scars of the past few years mark ABS-CBN News chief Regina “Ging” Reyes as a news leader with countless lessons for the next generation of news leaders. As testimony to her media achievements in The Philippines, she was recently named the 2022 Southeast Asia Editorial Leadership Laureate by WAN-IFRA’s Women in News programme.

Her message to young media leaders: pay attention to innovation and disrupt yourselves by rethinking your relationship with your public.

Almost three years ago Reyes was leading the newsroom of ABS-CBN, then the biggest broadcaster in The Philippines. Overnight (On May 2020) it was forced by the government’s telecommunications commission to close its broadcast television and radio stations all over the country. Its content can now only be seen on cable and on digital platforms (a licensing agreement with a much smaller TV station currently allows its newscast TV Patrol to air on free television).

Fortunately,  almost half of The Philippines’ young population already had a digital footprint and YouTube account. So they made the transition from linear to digital fairly painlessly. ABS-CBN News’ YouTube channel today has over 14 million viewers and its English-language channels have more than 1 million. On Facebook ABS-CBN News now has over 20 million followers and its website is among the top five in the country.

“Before being forced to end our broadcasts, we were victims of our own success – and the focus had always been traditional, linear broadcasting with a web presence. Today as a digital organisation, we are still a work in progress – we have just finished covering a very contentious presidential campaign and we are not without risk: our wide audience is young.”

“As journalists, we need to share our knowledge and engage in campaigns to fight disinformation. We need to fact-check disinformation and misleading reports. We need to do more to engage with communities, so people would trust us more. We need more diverse voices, more regional desks and more regional journalists. More transparency in what we do and how we do it would be a good step in regaining trust. We need to publish our ethical guidelines and make our operations more responsive. Change must be constant,” said Reyes.

Warren Fernandez, CEO of Edelman Asia Pacific and President of the World Editors Forum, said geopolitics were making things more and more difficult. “We need to stick to our values and what journalism is supposed to be – serving people, serving democracy, serving the truth.

“Get to know each other across the regions – learn together about the big issues. Keep your professional networks going,” Fernandez told Fellows. “And internally, focus on talent – finding, attracting and keeping good people takes time and effort – but it must be done,” said Fernandez, former Editor of the Straits Times.

The Temasek Foundation Young Media Leaders Fellowship is a programme of the World Editors Forum Asia Chapter which aims to nurture the next generation of media leaders.