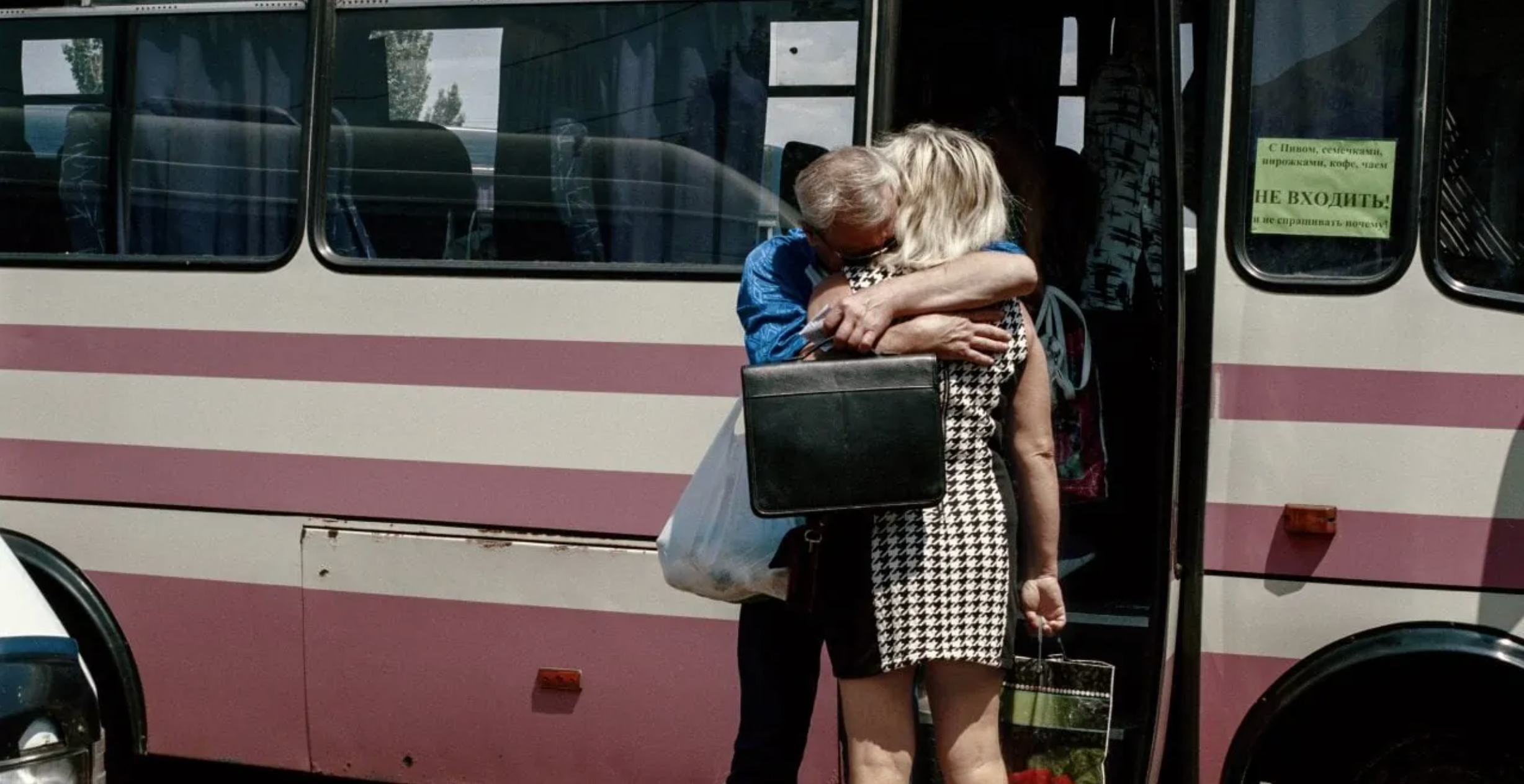 Anastasia Taylor-Lind has been documenting the lives of ordinary Ukrainians since the 2014 Maidan revolution. She has spent this year in Ukraine photographing the devastating consequences of the Russian invasion on civilians, some living only a few hundred metres from the frontline.

Ukraine is a country she loves, but Taylor-Lind questions why she is the one who gets to tell the story of this conflict.

“Given a choice between hiring me and hiring one of my amazing Ukrainian colleagues, why would you hire me?” she said. “You have to fly me from London. I don’t speak the language. Almost everything has to be explained to me because I’m an outsider. It doesn’t make any sense at all why you would choose me, a foreigner.”

Thousands of journalists from around the world have flocked to Ukraine to cover the war for international audiences. Taylor-Lind believes it is Ukrainians, as well as foreign correspondents, who should be telling the story of this war to the world, not simply working as translators or fixers for foreign correspondents.

“I think the strongest photographic storytelling that is coming out of Ukraine is from Ukrainians,” she said. “I believe photography to be valuable and that it makes a contribution … and the strongest work will be made by people who are from the communities that they are documenting. No one has a problem with Ukrainian journalists doing the legwork, producing stories for foreign journalists in Ukraine right now, but often without getting the byline on the news report.”

The photojournalist industry is dominated by “white, middle-aged, middle-class, heterosexual men” from Western countries, Taylor-Lind said. She believes they are parachuted into wars because media bosses for international outlets have an unconscious bias against local journalists, doubting their objectivity and reliability as witnesses to what is happening around them.

“There is a colonial idea that only white people from rich countries can be truly objective, can truly tell other people’s stories,” said Taylor-Lind.  “That, for example, non-white people can’t be trusted to tell the stories of their own communities because they would be biased. So, let’s send the guy from the American newspaper to go and tell it objectively.

“And the thing is that none of us are objective, but there is an idea inside the legacy media that some voices are more objective than others and typically they are old white guys from rich countries.”

This attitude has also affected the types of commissions Taylor-Lind is offered. “It’s fine for me to work in war zones as a woman, but I better make sure I get all the stories that are about women in war zones and preferably portraits, not the frontline stuff. Don’t step on anyone’s toes. Don’t take anyone else’s work. You stick with the women and war thing.”

Most of Taylor-Lind’s work over the last eight years has not been made on assignment but is self-initiated and self-funded. As a foreigner reporting on communities that are not her own, Taylor-Lind prefers to work alongside a writer from that community when possible. In Ukraine, that is Alisa Sopova from Donetsk city.

Tatiana Batskalyova cares for her 90-year-old mother-in-law, Lira. Both women fled their house in the grey zone between Avdiivka and Donetsk, which was destroyed by shelling. Currently, they live in an apartment in Avdiivka that was also heavily damaged by shelling and then renovated by the family. Tatiana has been unsuccessful in receiving compensation for the war damage from the state. Photo credit: Anastasia Taylor-Lind | Caption: Alisa Sopova | www.anastasiataylorlind.com.

“One of the ethical responsibilities I have is not to hire brilliant photographers or journalists as translators or fixers. If I want to work with a Ukrainian writer or photographer then … they shouldn’t be working as my translator.”

Taylor-Lind and Sopova have been working together in Donbas since 2014, writing and photographing as a team, the outsider and the insider, each bringing something unique to the story. Taylor-Lind hopes her pictures speak to people who’ve never been touched by war, so they can see what it looks like in the faces of ordinary people.

“We have this idea that war takes place in a war zone, perhaps in trenches. We focus our attention on the experiences of combatants. But often there are civilians living in these spaces as well. My main interest isn’t so much in the soldiers, but more what it’s like to be living with them,” she said.

Taylor-Lind and Sopova have forged a successful, and equal, collaboration in Ukraine. But she is acutely aware of the differences in their lives. Taylor-Lind can go home anytime she wants, her Ukrainian colleagues are home. When she fell ill with COVID-19 she returned to the UK to rest and recharge her batteries, both physically and emotionally.

“When I come home, of course I follow the news in Ukraine, and I’m planning my next trip. But Alisa’s mum and her whole family are in Donetsk, in the occupied territories, so it’s just completely different.”

“Foreign photographers always have a choice whether to go to Ukraine. And we also have a choice when to leave or have downtime. We need to be able to sleep properly, we need to have time away from work to be good at what we’re doing.”

Donbas, Ukraine, 2019. Anna Dedova, 75, at the grave of her son who accidentally killed himself with a hand grenade he found near his home in the village of Opytne last year. This visit, organized by a local activist, is a rare occasion for her because the graveyard is situated in the grey zone between Avdiivka and Donetsk and is largely inaccessible due to fighting and landmines. Photo credit: Anastasia Taylor-Lind | Caption: Alisa Sopova | www.anastasiataylorlind.com.

On a purely practical level, an important ethical consideration for Taylor-Lind is using the appropriate transliteration of Ukrainian names and places, as the English spelling varies in transliteration from the Russian and Ukrainian languages. For example, Kiev was once the accepted spelling of Ukraine’s capital city (transliterated from Russian) but is now written as Kyiv, the Ukrainian transliteration. Donbass (Russian) has become Donbas (Ukrainian). “Words matter, names matter. It’s important that we as journalists get it right,” said Taylor-Lind.

As well as basic accuracy, she is also acutely conscious of representing people in a way that they will recognise themselves and their experiences in the images. In Ukraine, she has photographed the same people several times and was able to involve them in her recent exhibition of their images at the Imperial War Museum in Manchester.

“As soon as I saw the exhibition space, I made pictures and sent them on Facebook, Messenger or WhatsApp. I was like, ‘look, this is your photo’. Lots of them used them as their profile picture and shared them on social media.”

Donbas, Ukraine, 2019. Nikolay Grinik fishing with his son Kirill and daughter Miroslava during a weekend picnic near Avdiivka. Most recreation zones in the area are contaminated with landmines, and people struggle to find safe spots. But Griniks are experienced in navigating the space of war: they have military positions only 50 meters away from their house. Photo credit: Anastasia Taylor-Lind | Caption: Alisa Sopova | www.anastasiataylorlind.com.

There is value to the foreign journalists who are adding to the growing body of stories and images about the war in Ukraine, says Taylor-Lind. Ukraine is huge and Russian attacks have spread rapidly throughout most of the country. That means great numbers of reporters and photographers are needed to document this war.

“This might sound idealistic, but I see the role of the international journalist as a supporting role for my Ukrainian colleagues because it is too great a task for them alone, not because they are Ukrainian but just because the scale of the violence that’s been unleashed and the speed at which it has happened” said Taylor-Lind.

“I’ve been working there for eight years, and it’s a place that I love, and I feel at home in. I’ve been telling the stories of the same people for a good while, and it doesn’t make any sense to me why I would stop now.”

Lisa Clifford is a British journalist and documentary maker. She has also worked in media development around the world including in Ukraine.

Main photo: Donbas, Ukraine, 2019. A bus departing from Kurakhovo, a frontline town, to the entry checkpoint into the non-government-controlled Donetsk. After reaching the checkpoint, passengers will have to queue for many hours, in the middle of a minefield, waiting to cross. Despite harsh conditions, over a million people cross this line every month. One of the major reasons for traveling is to visit family members on the other side. Photo credit: Anastasia Taylor-Lind | Caption: Alisa Sopova | www.anastasiataylorlind.com.

The selected photos in this piece are taken from the series “5k from the Frontline” and are used with the kind permission of the photographer, Anastasia Taylor-Lind (www.anastasiataylorlind.com).

This article is republished with permission (original) from the Ethical Journalism Network (EJN) which, with the support of the Evens Foundation,  commissioned a series of articles about the ethical challenges facing journalists covering this war – in Ukraine, Russia and around the world.  This series follows the recent publication of media landscape reports – ‘Building Trust in Journalism in Central Eastern Europe‘ – on Bulgaria, Czech Republic, Georgia, Hungary, Poland and Slovakia.