WAN-IFRA joined forces with partners from across Europe to create a serious game aimed at kindling the interest of youth in professional news and traditional media. NewsArcade-Seriously Play the News project is co-funded by the European Education and Culture Executive Agency as part of Creative Europe- Media and involves eight partners from five European countries.

Whether they are pure broadcasters or companies providing news content in different formats, media outlets are all challenged like never before. ​They need to reaffirm their importance and usefulness in our modern technological society and create new relations with younger audiences (young adults aged 18-35) that seem distant from traditional media.

In his book “The Gamification of Digital Journalism: Innovation in Journalistic Storytelling” David O Dowling argues that gamification in journalism increases engagement and loyalty among users. Indeed, it is easier to learn in a state of joy or a state of play because you don’t notice that you’re making an effort. When the user is active and must make choices, their empathy and engagement is strengthened.

Quite a few reputable news media have successfully explored the gamification of news. The New York Times has experimented with game-inspired stories since 2012. Al-Jazeera’s award-winning news game Pirate Fishing was an extremely successful experiment to disseminate the intricacies of the multi-million dollar illegal fishing trade in the seas off Sierra Leone. The Financial Times regularly creates news games that are interactive experiences based on factual reporting, and let players delve into topics ranging from the gig economy to the US-China trade war. In December 2022 German daily Der Tagesspiegel announced the launch in 2023 of a news game that promises to constitute an immersive, in-person experience “with the hopes that players walk away with an understanding of how their local governments work”.

NewsArcade-Seriously Play the News project’s general objective is to tackle the challenge of the legitimacy of traditional media among youth and improve news literacy by closely bringing together journalism and news consumption through gamification. The idea is to strengthen the bond with the audience and create new connections with distant potential audiences, by actively taking the reader into account, explaining why and how news media produce news and bringing together journalism and news consumption. The game will put readers in the perspective of a journalist and give news publishers a means to distribute existing content in new ways, to seek out a new audience. It will be embedded in news media websites and will constitute the only game in the market that is based on real, evolving news.

Based on real sources from actual news pieces, the user starts the game with the editor, who at “the morning briefing” gives them the topic to cover, a target group, and a choice of objectives and angles. The gamer is then presented with real reporting material and needs to choose which bits to use. The user will learn that by progressively electing specific quotes and images for their article, they will effectually angle their story – sometimes bordering on propaganda or fake news. At the end of the selection of sources, the player is presented with the story resulting from their choices, and the editor will debrief the effort explaining which agendas the final piece serves, what might be the long-term consequences, and how differently the same story could have been told. In the hopes of the consortium, a NewsArcade piece will engage the audience in exploring the bigger picture and understanding how the journalistic process in editing and presenting the facts can advertently or inadvertently create different stories, narratives and conclusions.

The project started in October 2022 and will last two years. Partners have been working on defining the requirements of the authoring tool, by collecting data through desk-based and field-based research. In particular, the desk-based research included a literature review of existing studies on the trends and attitudes of young people in regard to news consumption and traditional media, and the field-based research included both surveys and interviews. The surveys addressed journalists to collect their experiences, needs and expectations towards a gamified news tool, and the interviews were conducted with stakeholders of media outlets (such as editors, publishers, decision-makers, etc.) to understand the practical implications of introducing the game in the publications’ workflow. The results have been analysed in the project’s user requirements report. Currently, following the research findings, the partners are working on the format and technical design of the NewsArcade game. The Minimum Viable Product of the authoring tool will be available in May 2023 for testing with publishers.

NewsArcade is a 2 year Creative Europe-Media co-funded project (project no: 101060250) with a mission to bring together journalism and news consumption closely by means of gamifications as an educational approach to improve young adults’ news literacy, critical thinking skills and thus, tackle disinformation and the challenges faced by media companies. 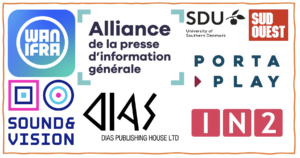