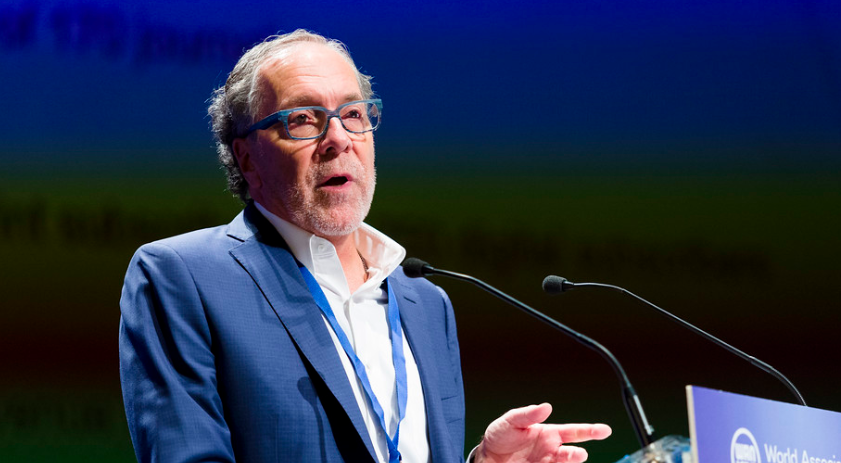 Alan Fisco, President of The Seattle Times at the World News Media Congress 2022 in Zaragoza, Spain. Image by Aránzazu Navarro for WAN-IFRA.

Intensely focused on reader revenue for more than a decade, Fisco credits The Seattle Times’ success in large part to its high quality, local content.

Winner of 11 Pulitzer Prizes, the Times has 176 journalists, which makes it the second largest news staff in the western United States after the Los Angeles Times.

Twenty-seven of those positions, or 15 percent of the total newsroom staffing, are funded through the Times’ philanthropic funding work, which helped them to add 11 newsroom positions in 2022, Fisco said.

The past couple of decades have not been without their challenges and hardships, however.

“We, like many of you, have been forced to cut expenses and cut staff over the years as advertising revenues have declined pretty precipitously. But when we’ve done that, we’ve tried to do everything we possibly can to protect newsroom positions,” Fisco told participants at WAN-IFRA’s World News Media Congress late last year.

The Seattle Times has been locally owned and independent for more than 125 years, he said, adding, “We take great pride in that local ownership and believe it is one of the cornerstones to our success.”

Fisco himself has been at the Times for more than 30 years and its president for the past five.

An early decision to focus on reader revenue

The Times made the strategic decision to move its business model away from a reliance on advertising to one that was audience focused more than 10 years ago, long before most of its peers.

“At that point everybody was still saying digital advertising was going to be the saviour for us,” Fisco said. “What we were seeing was declining rates. Modest growth, but single digit growth. We strongly believed that we needed to make a pivot organisationally and focus on content, which really is our unique differentiator.” 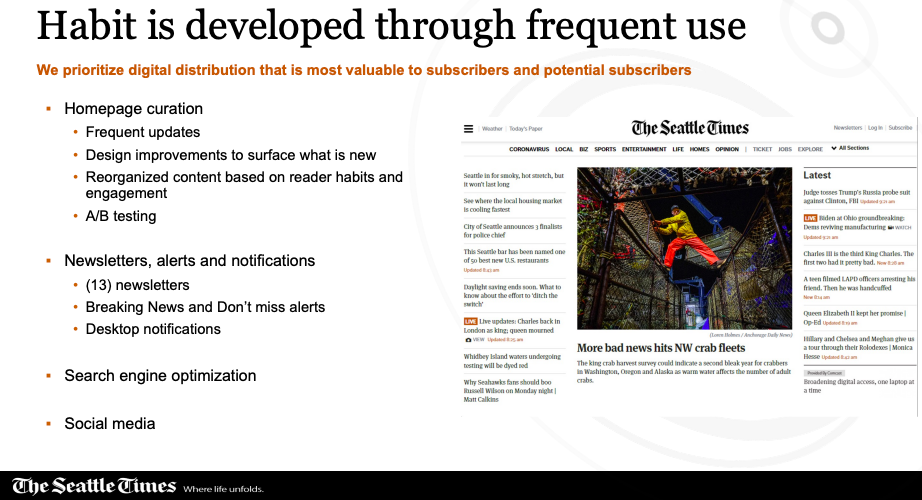 Today, 70 percent of The Seattle Times’ revenue – both print and digital – comes from its audience.

However, Fisco said 70 percent of that 70 percent is still coming from the print side of its business. For example, they have 130,000 print subscribers vs about 82,000 digital subscribers.

Advertising represents a further 24 percent of revenues, and that is split evenly between digital and print.

“So, clearly you can see we’re still very dependent on print revenue,” he said.

On the digital side, the paper uses a metered paywall, which it launched in 2013. In 2015, the company invested in a new digital tech stack both front and back-end.

“That was a two-year process,” Fisco said. “We’ve spent the years since that installation tweaking it to make it even better.”

Those efforts really paid off in 2020 and 2021 as Seattle became the epicentre for the Covid outbreak in the United States.

“We suddenly had this giant influx of page views and digital subscriptions both locally and internationally. Had we not done that work in advance, we would never have seen the growth that we have experienced,” Fisco said.

Alongside the tech investments, the Times was also doubling-down on its editorial efforts.

“We’ve always focused on retention and loyalty, but our team has spent a lot of time in the last two years focussing on strategies that build habit and thus loyalty with readers,” he added.

“We all know content is king,” he continued, “but what we really try to do is inspire loyalty from readers by understanding what very specific content they are coming to frequently in order to deliver more content like that to build frequency and habit.” 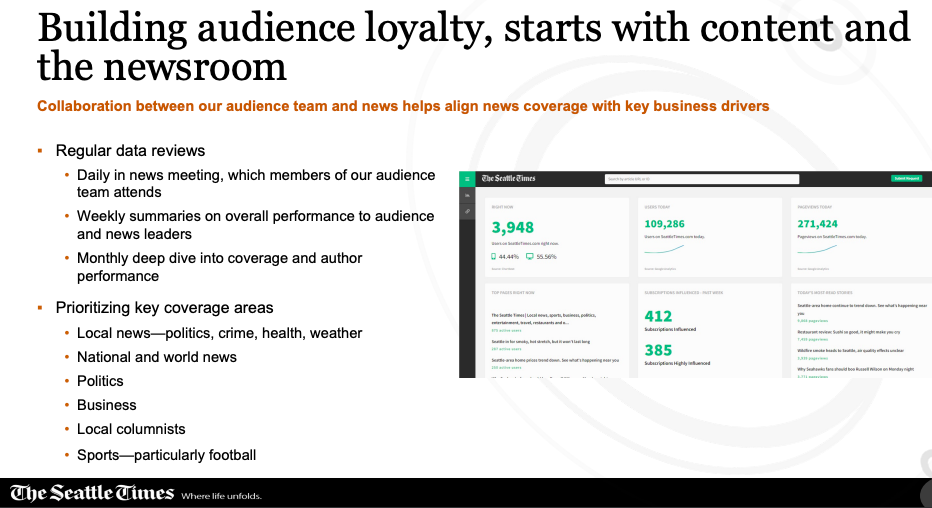 For the Times, these efforts go well beyond the newsroom, with a strong cross-departmental collaboration that involves nearly every department aside from production and includes regular data reviews.

The Times also has regular weekly meetings about data results as well as a monthly deep dive that looks at performance, both content and author performance, Fisco said.

“That’s done between some of our marketing folks, our data people, and our assistant managing editors to really help them focus on what they need to: what’s working and what’s not. And how they can build on the successes, and hopefully move the needle up,” he said.

This was not an easy or quick process, Fisco added, saying that one learning he wanted to share for those just getting started in this area is that “it’s very easy to overwhelm people with data. And when we started this process, that’s exactly what happened.”

“Keep it simple,” he continued. “Let the data geeks do their deep analysis, but when you are working with the newsroom in particular and other departments who are not used to analytics, you really need to keep it simple or you are going to have a heck of time trying to get them to buy in.”

“We really want people to understand what content is consistently driving subscriptions and what subscribers are engaging with frequently in order to build that loyalty,” he added. “It also has helped us reallocate resources, redefine news beats and make larger investments in some of our key areas.”

Some of the main content areas that have consistently performed well for the Times are:

The homepage is very much alive

While there was a period where some in the industry were saying the homepage was dead because so much traffic was coming from side channels, search and social, this has not been the case in Seattle.

“At least in our market, the homepage is not dead. It is critically important for us,” Fisco said. For example:

These subscribers expect frequent updates, and over time, the paper has gone from having small “new” tags on recent stories to creating a dedicated “Latest” feed at the upper right of their homepage so readers can immediately find the latest news and updates.

Initially the “Latest” box was lower on the homepage, and the decision around moving it was based on extensive testing.

“Since we have done this, and just moving it up the page, we’ve seen a 62 percent increase in clicks,” Fisco said.

They are also using both newsletters and alerts to help them build engagement and frequency with readers.

The Times has 1 million sign-ups for their desktop alert programme.

“We track very closely on a monthly basis how many digital subscriptions we’re getting as a result of that and how much revenue we’ve gotten from those subscriptions as well as the ad revenue from that traffic,” Fisco said.

“Through August, we have a profit of $900,000, so a little bit more than $100,000 a month. Not only is this a really good programme and effective way to grow engagement and digital subscribers, it’s also a very profitable one for us,” he said.

Subscriber-only benefits are fine, but…

The Times, like many other publishers aiming to maximise their reader revenue and retain subscribers, offers a variety of subscriber-only benefits, such as events and discounts.

However, Fisco said that for them, these are really not all that helpful for retaining subscribers.

“These benefits are nice to have, but in our experience, they have a marginal impact on retention,” he said. “We have automated subscriber onboarding journeys, but our focus there is really to help new subscribers understand the benefits they have with that subscription, like shared subscriptions, access to our print replica and all of our apps.” 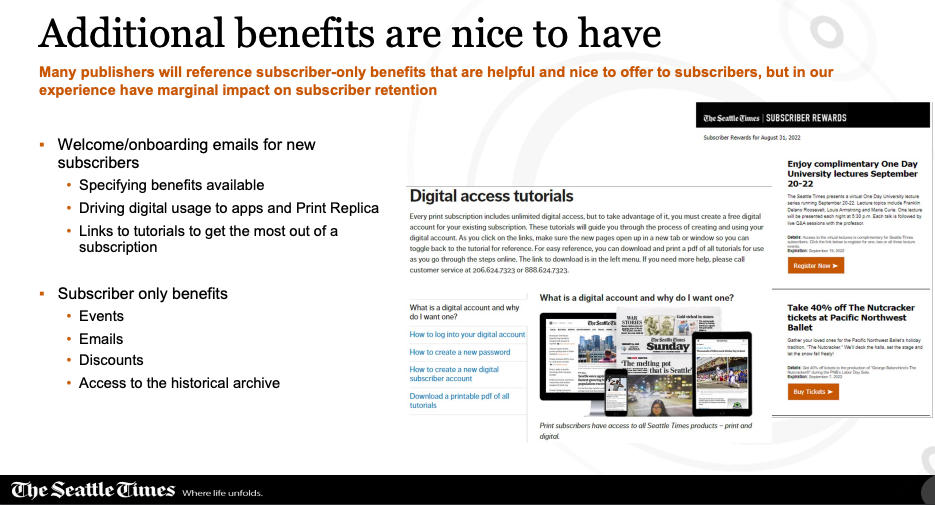 Fisco said one of the main drivers in their success in reducing churn has been effective credit card management.

“It’s not glamorous, but it’s incredibly effective,” he said. “I mentioned we had invested in our tech stack. We went through a lot of tweaking back and forth to make it even better, particularly in this area. My point here is this does not need to be expensive, and it isn’t.”

He noted some specific tactics that have worked well for the Times, such as expanding the grace period after a customer’s credit card expires.

“Make it as long as you possibly can without creating billing and invoicing issues,” Fisco said, adding that the Times’ current grace period is 27 days.

“This gives customers an opportunity to resolve the non-payment or credit card issues they have, and it’s shocking to me how many there actually are,” he said.

From that point, each time a reader comes to The Seattle Times’ website, an orange bar across the bottom of the page tells them their credit card is about to expire, and what they need to do to keep their subscription active.

Send them an email, don’t call

Once the card expires, Fisco said they send an email to the reader about it. They do that up to six times if needed. He recommends publishers use email for this process, which he said they have found to be both inexpensive and effective.

“We used to call people. I would strongly suggest you don’t bother with that,” he said.

He also urged other publishers to have a processor for updating credit cards in place.

“This initiates and automates the updating of credit card expiration dates and credit card numbers without the interaction from subscribers. And this comes directly to us from the credit card issuers themselves, like Visa and Mastercard,” he said.

Lastly, Fisco recommended that publishers should retry failed transactions. For example, when their attempt to charge a reader’s card fails, the Times will retry it up to six times during that grace period.

“We’re able to successfully resolve between 65 and 70 percent of those that failed initially,” he said. “As a result of this and a lot of other work, our churn has declined pretty dramatically.”

Above: Alan Fisco in Zaragoza with Nancy Lane, (at left) CEO of Local Media Association, who organised the session, and Toby Collodora of the Star Tribune. Photo by Aránzazu Navarro for WAN-IFRA.