Toby Collodora at the World News Media Congress in Zaragoza by Aránzazu Navarro for WAN-IFRA.

Based in Minneapolis, Minnesota, the 155-year-old Star Tribune is the third largest metro daily newspaper in the United States, and the fourth largest on Sundays.

The company implemented a paywall in 2011 and today has about 100,000 paid digital subscribers. Despite having more than a decade of experience in this area, Collodora told World News Media Congress participants in Zaragoza they realise “we still have a lot to learn.”

However, one thing the Star Tribune is certain of is the importance of high quality content.

“We believe content is the most important thing, and as such we’re proud to have more than 230 journalists in our newsroom,” she said.

Regularly promoting this content to their subscribers is one of the key things the publishing house is doing to build retention, but more on that in a moment.

Last year, 2022, became the first year the Star Tribune’s digital advertising revenue equaled its print revenue. And Collodora said they expect to be a subscriber-first, digital majority company by 2027.

One reason this might still take a few years is not so much anything lagging in their digital development but rather because their print revenue remains “very strong,” she said.

While most publishers know that keeping their subscribers is critical for their long-term success, the Star Tribune has underscored their commitment in this area by creating a full-time position specifically focused on retention, which is how Collodora came to join the company in November 2019.

Since then, the Star Tribune has been creating a culture of retention.

“Our goal is to discuss retention as often as we discuss acquisition,” Collodora said. However, unlike acquisition, where the success or failure of experiments can often be seen very quickly, measuring progress in retention takes a lot longer.

To help do this, she said the Star Tribune has defined a number of key retention indicators to keep an eye on developments. 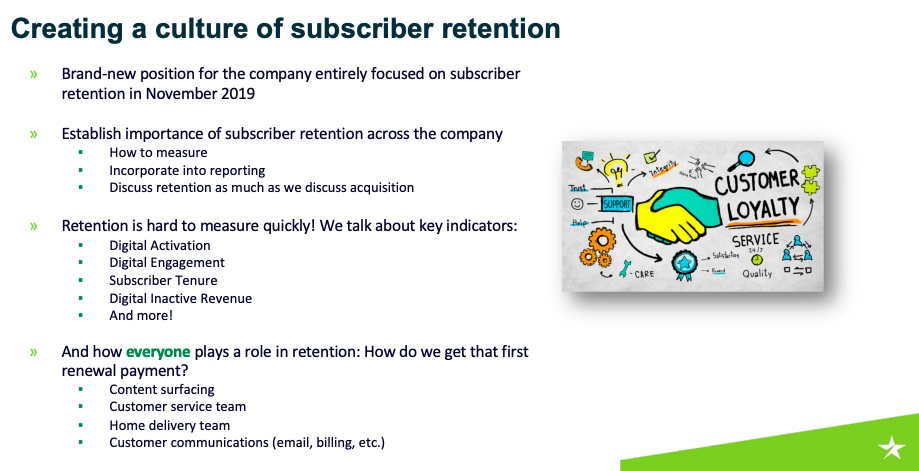 These indicators include things such as tracking digital activation, which is when a subscriber sets up his or her digital account. Another indicator is digital engagement, which looks at the number of times subscribers come to one of the Star Tribune’s digital properties: desktop website, mobile website, apps, e-edition, or print-replica products.

In addition, they look at digital inactive revenue, or the number of people who are paying for – but not using – their digital products. This helps give them an idea of whether people are more likely to churn, she said.

Their single best indicator for retention

While Collodora is the person in charge of Star Tribune’s retention efforts, she said they also spend time talking about how retention is part of the job of everyone who works for the company.

For example, she said, “we talk about what each person in the organisation can do to get a subscriber to make that first renewal payment. That’s really something we focus on because once a person makes their first renewal payment, they are far more likely to retain. It’s our single best indicator.”

This has led them to intensify efforts of their customer service team when a subscriber calls to cancel.

As is often the case, finding out what works and what doesn’t in these areas requires a fair amount of experimenting and testing.

“We believe in testing and creating a culture around testing, and we test everything,” she said. “This is true both in acquisition and retention.”

“What is really important about all the testing though is that you also do the hard work of the follow up and then the follow through,” she added.

While setting up tests can be fun and exciting, it’s really creating the report afterward and then making those key adjustments that is critical, Collodora said.

“That’s what makes a difference,” she said. “Those small adjustments – and of course maybe some bigger ones if we’re way off track – over time, continually is what leads to our success.”

Moving the needle with email

One of the ways the Star Tribune helps to move their key indicators is by making heavy, strategic use of email.

“We do a ton of email,” Collodora said. “Eighty-eight percent of all of our new subscribers give us an email address, and we’re working to make that number even higher.”

“We’ve had an additional welcome email series for a very long time,” she added. “It welcomes people, showcases the apps, and introduces our email newsletters.” 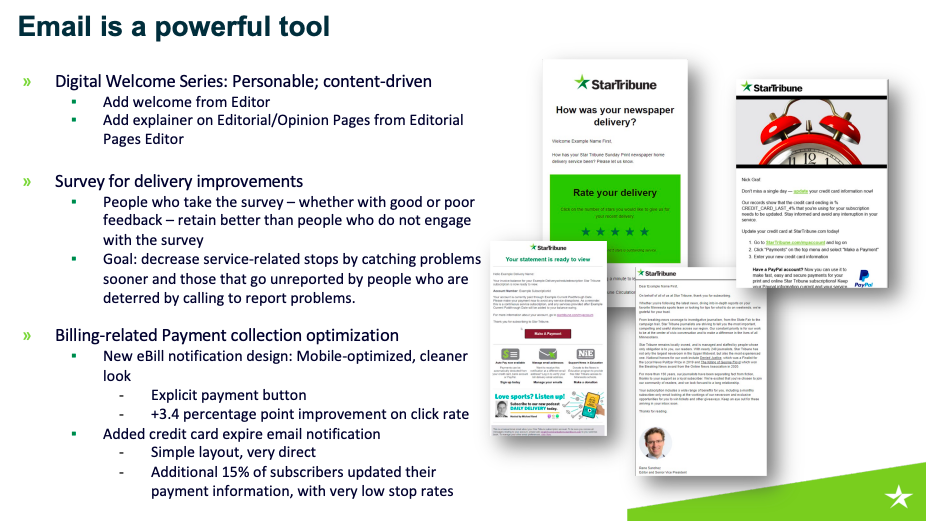 While the Star Tribune has found this to be very functional, she said they have also started experimenting with making the newsletter experience more personable for the subscriber.

For example, they have added a welcome email from the editor that showcases their topics and content to help people get a fuller picture of the richness of their content and a broader view of what is available beyond breaking news or the limited number of stories readers see on the Star Tribune’s homepage.

In addition to having a welcome from their editor, they have one from their opinion editor, which “resulted in a substantial lift. Open rates were up 3 percentage points when we did that,” she said.

The Star Tribune is also using email to promote their content to subscribers.

For example, about twice per quarter or whenever they have a specific reason, such as an upcoming voting guide, special features, or big investigations, they partner with their news teams to create content-based messaging for all subscribers.

“Lately, we’ve been experimenting with emailing our subscriber base at the end of a several part series, so pointing the attention back to the earlier parts that people may have missed and showcasing that most recent one,” Collodora said.

Their next experiment related to this is to email just before the last part of a series is published with the hope they can drive readership in both print and with their digital audience, she said. 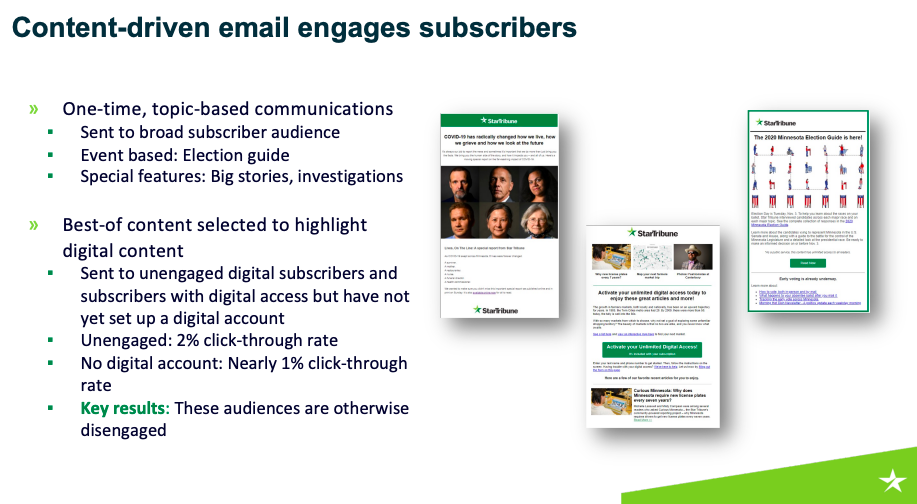 Reaching out to inactive subscribers

Twice a month they also send a content-based email to their inactive digital subscribers.

“These emails are hand curated, and they feature five stories where at least two of them have a digital heavy element to them so even if you read the story in the newspaper, it’s a different experience having it on the digital platform,” Collodora said.

She said the emails to these audiences have low click-through rates, often 1-2 percent, but since the engagement with these subscribers before was about zero, they are happy to see some improvement.

A little over a year ago, Star Tribune began allowing subscribers to cancel online. Previously subscribers had to call in to cancel, and staff had the opportunity to keep the subscriber onboard.

While allowing online cancellation initially raised some concerns that more people might cancel, Collodora said they’ve implemented a low-tech solution where users enter in some simple information, such as their name, email address and answer a short series of questions to help identify what kind of subscription they have.

“That information is then used to present an offer, sometimes it’s a price-based offer, sometimes it’s a different offer such as somebody is experiencing a problem with their digital account, we offer that somebody will give them a call back or send them an email to try to resolve that technical problem, and then of course that entices that person to retain their subscription with us,” she said. 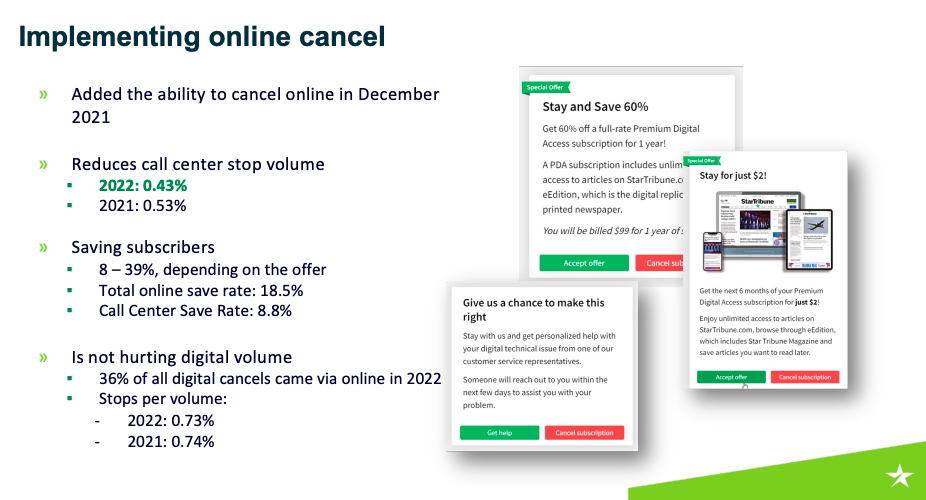 More importantly, she added, this has given them the ability to experiment easily with rates and other levers.

“It’s extremely important to us as we’re learning how to work with opportunity and rates. So far this year (2022), we’ve completed more than 15 online cancellation tests, and we’ve been able to use that information to help optimise our call centres as well,” she said.

While building a culture of retention sounds like a lot of work, Collodora stressed that it can be done simply too: “we actually track most of our retention testing in very simple spreadsheets.”

What’s important is to start, she said.

Above: Toby Collodora (centre), in Zaragoza with Nancy Lane, (left) CEO of Local Media Association, who organised the session, and Alan Fisco, President of The Seattle Times. Photo by Aránzazu Navarro for WAN-IFRA.