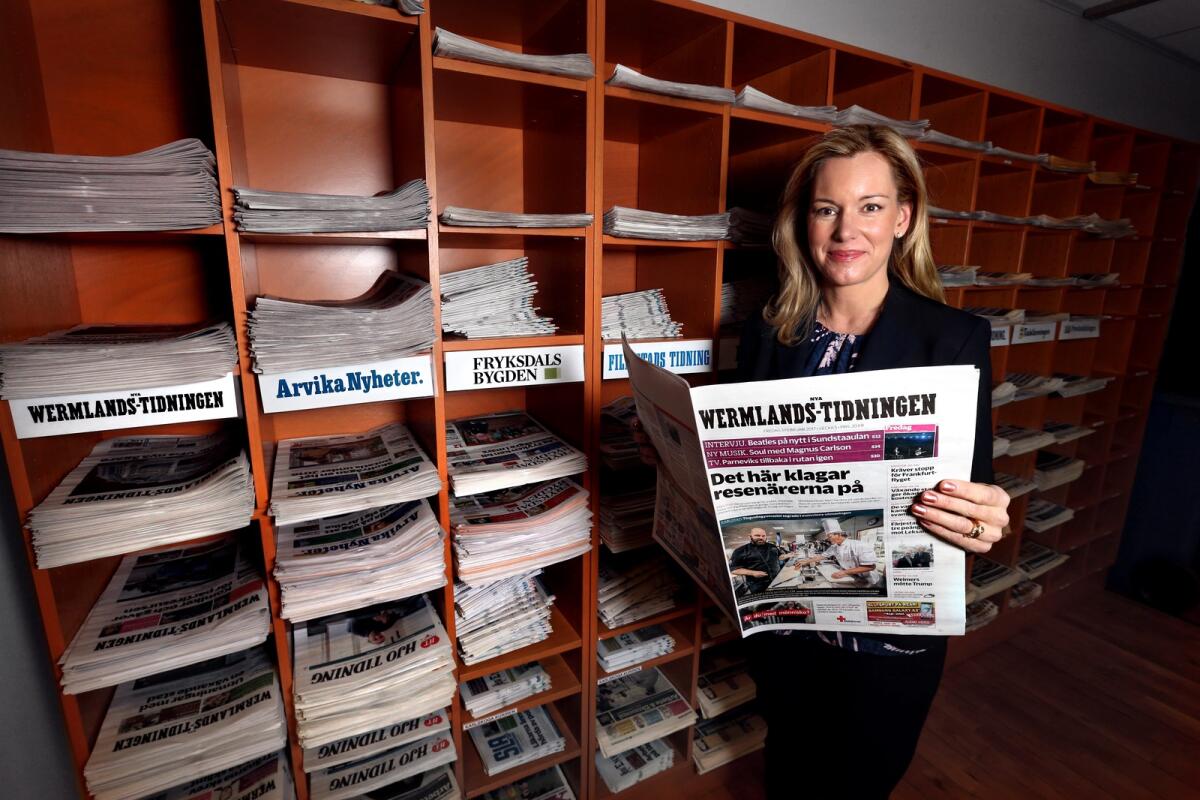 In May 2021, Victoria Svanberg, acting President of NWT Gruppen AB in Sweden, has been elected its new Chairperson. She addressed the WAN-IFRA Supervisory Board members at its annual meeting on 23 June 2021. The Media Freedom Board of WAN-IFRA provides guidance and insight on its Media Freedom activities and strategic direction,  with a specific emphasis on programmes that receive funding from donors in support of WAN-IFRA’s media development programmes.

WAN-IFRA carries out an impressive work and I am both humble facing the important mission of our organisation and at the same time greatly honoured to have been asked to take over as Chair of the Media Freedom Board.

My name is Victoria Svanberg, and I am President of NWT Media. NWT Media is a successful local and regional media group outside the large cities in Sweden, In fact, I represent the fourth generation in this family-owned business, where we work as publishers, managing several local and regional newspapers. Our head office is situated in a midsize town in Sweden called Karlstad, where I also live with my husband and our 12-year-old son. I am also vice president of News Media Europe.

In addition to being owned by the family, our business group is also owned by a trust whose purpose is to promote education and research in the media field. The Anne-Marie and Gustaf Anders trust for Media Research was established in 1985, in connection with our 150th anniversary, and aims to promote scientific teaching and research in the media field. The purpose of the trust is a free press and a free exchange of opinions.

Over the last decade, we in the media sector have worked tirelessly to improve and build on our business models so that we may continue to offer the citizens of our regions high quality journalism.

Our driving force is that we as independent media play a significant role in improving government accountability and reducing corruption in the country.

For us, it is about more than just business. As producers of professional journalistic content, we have a responsibility as watchdogs of democracy, to ensure that citizens stay informed. It is also about preserving and building on our shared experiences, our culture, and values as a democratic society.

The platform economy has provided important opportunities for our journalism, as we reach greater audiences, but it is of huge importance that those benefits are not undermined by an imbalance in terms of competition in digital markets.

When it comes to media freedom and independence, we watch developments in several other States with great concern, as they set extremely damaging precedents.

When it comes to fake news, we should realise that it damages not only the democratic process, but also trust in the wider institution of journalism and the media, with grave consequences for society.

We need more responsible actors in the online field.

WAN-IFRA’s mandate is to defend and promote media freedom, and the economic independence of news media as an essential condition of that freedom.This principle has been at the core of the Association since its establishment in 1948, by media active in the Resistance during World War II. WAN-IFRA believes that increasing media freedom directly strengthens democracy, transparency, and accountability.

To achieve this, our support to media in more than 20 countries across the globe focuses on three main areas:

WAN-IFRA applies a dual approach to supporting these focus areas: It applies advocacy to address organisational, political and structural constraints to media freedom. It applies development strategies to strengthen the capacity and networks of the media in national, regional and international markets.

Thanks to our Swedish members’ dedicated work, over the past decade Sida has awarded WAN-IFRA more than 12 million Euros. Randi Øgrey at Mediebedriftenes Landsforening (MBL) has been instrumental in forging a highly successful 8-year relationship with the Norwegian Ministry of Foreign Affairs to build on our work across Africa and Southeast Asia. In 2015, one of my predecessors as Chair of this Board, Lars Munch, connected the team with the Ministry of Foreign Affairs of Denmark to begin a new partnership worth 2 million Euros.

In 2018, Phillip Crawley opened up the Globe & Mail to the Media Freedom Brain Trust, providing dozens of trainers and mentors from the business and editorial sides of the organisation to assist in our Media Freedom programmes, particularly in the Middle East and North Africa region. He has championed outreach with Global Affairs Canada – opening doors at the highest level for talks.

Please reach out to me if you are interested in learning more about our Media Freedom work, and especially if you have connections to potential funders – both public and private – who could join us in advancing this important work. This is a call to action where I ask all of you to participate. Our work very much depends on you and your engagement.